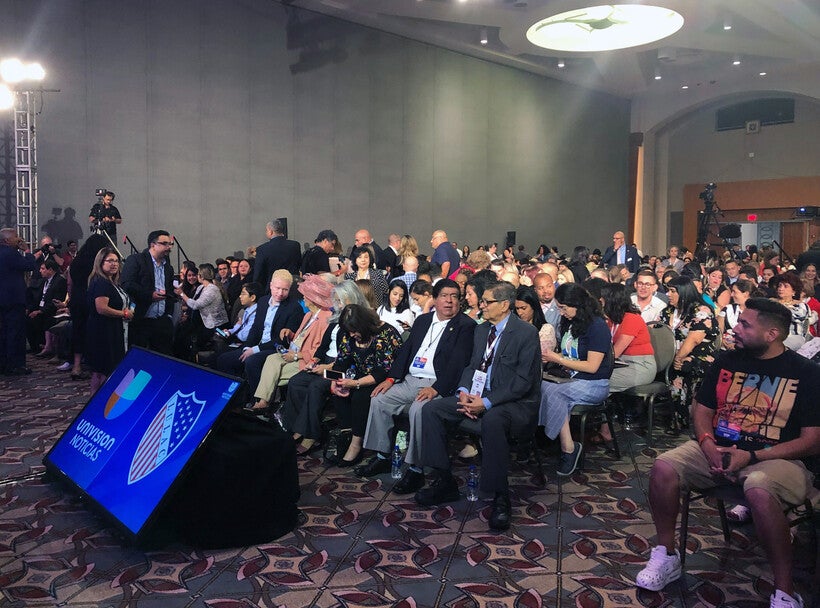 The presidential hopefuls participated in a town hall-style event, each spending about 20 minutes answering scripted and audience questions at the Milwaukee Convention Center downtown.

Candidates were in agreement on many issues including the need to rewrite immigration laws, provide better access to both physical and mental health care, and offer free college tuition and eliminate student debt.

Castro was the only candidate who took a small swipe at his fellow Democrats, criticizing O’Rourke and former Vice President Joe Biden who have have come out against making illegal border crossings a civil violation rather than a criminal offense.

"Post 9/11, it started being treated as a crime and then we started seeing a lot of the problems we are seeing today," Castro said.

When O’Rourke took the stage, he wasn't asked about Castro’s remarks and didn't address them.

O’Rourke, often speaking in both English and Spanish, said his home town of El Paso, Texas is one of the safest places in the country because it's a city of refugees.

"Let's never criminalize another person who comes to our country seeking asylum at our border," O’Rourke said. "Let's free every child detained right now and reunite with parents at once."

The event was a preview of sorts for what is to come one year from now when Milwaukee hosts the 2020 Democratic National Convention next July.

The upper Midwest delivered President Donald Trump to the White House, and Wisconsin is expected to be a battleground state in the 2020 presidential election. Before 2016, a Republican presidential candidate hadn't won Wisconsin since 1984. Trump added Michigan, Ohio and Pennsylvania to upset Democratic presidential nominee Hillary Clinton, who didn't campaign in Wisconsin in 2016 during the general election.

Warren, of Massachusetts, and Sanders, of Vermont, were the most critical of Trump in their remarks, getting applause and sometimes laughter from the audience.

Warren began by talking about her immigration plan, and despite being asked to stop twice so she could get into a different question, she persisted, telling the audience, "You know me when I do my plans, there are lots and lots of details — it’s who I am."

Sanders began by calling Trump "racist," a "bigot," "xenophobe" and an "embarrassment" for everything the country stands for.

"Trump is doing something unprecedented as a president," Sanders said. "He is trying to divide this country based on the color of our skin, or our religion, or our sexual orientation. And the reason he is going to lose is we are going to do the exact opposite. We are going to bring our people together."

When asked about his age, Sanders, 77, pretended he couldn’t hear the question. He then said age, experience and what a candidate stands for are all factors.

Trump, who was invited by LULAC but declined, will be in Milwaukee on Friday. He plans to tour and give remarks at Derco Aerospace to advocate for the passage of the United States–Mexico–Canada Agreement. Following the stop, Trump will attend a Republican fundraiser.

"Conversely, President Trump continues to champion economic policies that have delivered real results for our Hispanic Americans in Wisconsin and across the country," the statement said. "This president’s policies have led to record-low unemployment for Hispanic Americans and the opportunity for Latino Americans to start new businesses at a rate nearly three times the national average."