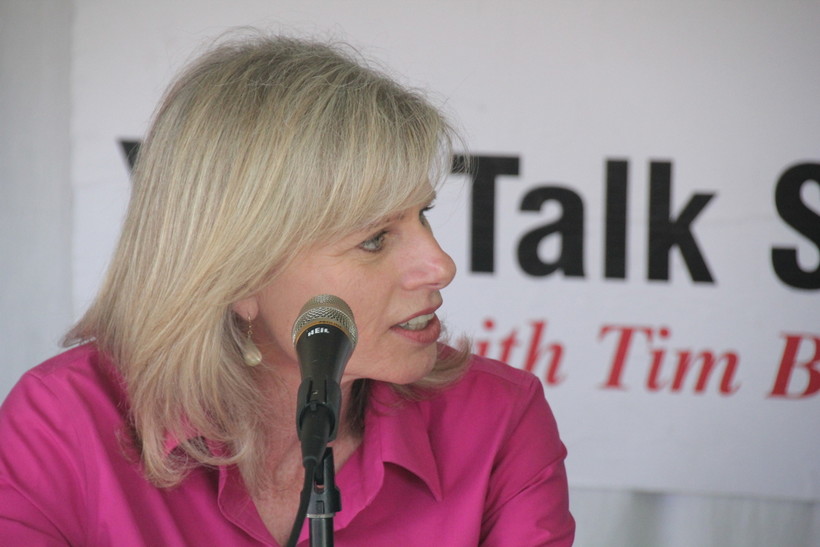 Above, Mary Burke speaking at the Rock County Fair in Janesville this past July. Photo: Shawn Johnson/WPR News.

ListenDownload
How Act 10 Would Change Under A Gov. Burke Or Gov. Hulsey?
Learn More At Wisconsin Vote.org

Though most Democrats are already looking ahead to the November gubernatorial election, party favorite Mary Burke still faces a primary election against state Rep. Brett Hulsey (D-Madison) — a candidate whose campaign has been anything but conventional.

It’s clear when Brett Hulsey is in town: He’s hand-painted his name in white letters all over the rusting, red body panels of his 1987 Volkswagen Cabriolet convertible.

On one recent summer day, he strapped a blue paddleboard about as long as the car itself to its roof. It turned heads when he later drove through Madison's Willy Street neighborhood. People stopped to say hello, including one man who Hulsey said had helped him earlier on in his campaign.

“He was one of the guys who helped me hire homeless people to help me submit nomination papers,” said Hulsey.

The other part of Hulsey's campaign getup is a 1992 Klein bicycle mounted to the back of his car. It’s an American made bike, which Hulsey uses to stress two points: One, that bikes from Mary Burke's family business, Trek, were made overseas; and two, state grants handed out by Gov. Scott Walker's administration go to companies that outsource jobs.

Hulsey is always at the ready with a sound bite, and occasionally a gimmick that tries the patience of Republicans and Democrats alike. He toyed with the idea of dressing up like a Klansmen when the state Republican Convention was voting on a secession resolution. While he ultimately left the hood at home, Hulsey still dressed like a Confederate soldier.

There's a fearlessness to Hulsey, but his voice gets quiet when asked if he's always been that way. “My mom tells a story, (that) when I was 4 years old — my Dad was in medical school, she was a teacher working her way through — that I would walk down the hall knocking on doors in our apartment building until I found somebody home to talk to,” he said. “So, I've always been a little bit like this.”

Hulsey said he got into politics to be an “environmental action hero,” and that his campaign is an extension of that.

In a stark contrast to Hulsey’s campaign of one, aides and reporters swirled around Mary Burke as she met with voters at the Rock County Fair in Janesville in late July. When a woman told Burke that she recognized her from TV, the Democratic Party's endorsed candidate laughed in response, replying, “OK, but don’t believe all of those ads, all right?”

Burke won't so much as mention Hulsey when asked why voters should choose her over him in the August primary.

“I am working hard on making sure that the people of Wisconsin get to know me, my values, the type of governor I'll be, and my plans for how I'm going to lead Wisconsin forward, and how I'm going to make sure our economy turns around and is a leader, not a lagger,” said Burke.

Burke may not be talking about Hulsey, but in an unusual twist this year, Walker has been attacking Burke on the outsourcing issue. Burke has responded by talking about the nearly 1,000 people Trek employs in Wisconsin.

“Trek manufactures more bicycles here in Wisconsin and in the U.S. than any other company, and it does what it can to have as much manufacturing here as possible,” said Burke.

Some of the voters at the fair said they like Burke, and admitted they don't know much about Hulsey. In a Marquette University poll from May, nearly nine out of 10 voters had no opinion of Hulsey, and likely primary voters overwhelmingly supported Burke.

Hulsey's car turn heads on the street, but it's often the conventional campaign that wins votes in politics.