Route 51
Hear Me Out 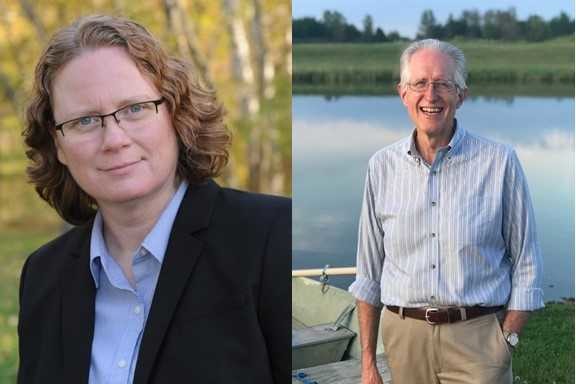 No matter who wins the Aug. 14 Democratic primary in Wisconsin's 7th Congressional District, voters in northern Wisconsin will have a stark contrast between who wins the primary and incumbent GOP U.S. Rep. Sean Duffy.

Margaret Engebretson, of Balsam Lake, is a retired U.S. military veteran and attorney, and Brian Ewert, of Marshfield, is a physician and the former president and CEO of the Marshfield Clinic. The two participated in a Wisconsin Public Radio debate this week.

Both Democratic candidates said the country is headed in the wrong direction under President Donald Trump's leadership and the support the president is getting from four-term incumbent Duffy, especially on the economy and how it's affecting the 7th district.

"One of the things we really need is a representative that will go to Washington and fight every single day to bring home the resources and the investments in our infrastructure such as broadband, roads, rail lines; and we are missing out on a huge opportunity here," Engebretson said.

She said many businesses in rural northern Wisconsin are struggling because they lack high-speed internet and cell phone service.

"We need to address climate change. In addressing that, we grow the renewable energy sector, which means we can now manufacture solar panels and windmills here in northern Wisconsin," Ewert said. "Currently, Wisconsin is paying $15 billion outside the state to purchase fossil fuels. It would be much better to be investing that $15 billion here within the state in renewable energy."

While the nation's economy has improved, neither Democrat sees evidence of a better economy in their district.

"We recognize that even though the economy has expanded, the people in northern Wisconsin are being left behind and that's why we need a representative in Congress who will be a balance of power with the presidency," Ewert said. "Particularly with the tariffs, 107 Republican representatives sent a letter to President Trump challenging the tariffs. Congressman Duffy chose not to represent the farmers and workers of northern Wisconsin in being the balance of power."

Duffy has said if retaliatory tariffs from other counties start to affect farm ownership, farmers who are Trump supporters could turn, and Duffy cautioned Trump to "watch that" while negotiating trade deals.

While responding to a question about Duffy calling Trump the strongest jobs president in decades, both Democrats disagree with the notion. Engebretson favors raising the federal minimum wage and providing support for more small businesses.

"Our unemployment rate is low, that is correct, but if you dig just beneath the surface, the quality of a lot of the jobs, especially in the 7th Congressional District, are such that they don't provide a living wage," she said. "I know folks out there that have more than one job. They're barely making it. One of the big contributing factors to unease and fear with a lot of the people of the 7th is the lack of reliable health care."

Both Engebretson and Ewert have a goal of universal health care coverage, but disagree on how to achieve it. Engebretson said she supports a single-payer, Medicare-for-all system. Ewert said he wants to keep the existing Affordable Care Act private insurance exchanges, but add a public option to them so people can buy into the Medicare system if they choose to.

Engebretson admitted the switch to a single-payer system could cost jobs in the health insurance industry.

"We need to transfer over to a public insurance system so that it's based on need," Engebretson said. "Taking away these administrative jobs, yes, will be hard on that industry, but we will need to absorb them into the Medicare system that will be expanded and into other industries."

Ewert said he supported the Choose Medicare Act, which was introduced in the U.S. Senate by Oregon's Democratic Sen. Jeff Merkley.

"The fee schedules that they have in there are placed between the Medicare fee schedules, which often reimburses below cost, and the average of the Affordable Care Act fees. In that way we do put pressure onto the health care system to continue to become more efficient," Ewert said.

Both Engebretson and Ewert said they favor legalizing recreational marijuana in the U.S.

"While there are some negative aspects to this, I believe that we should legalize marijuana both recreationally and medicinally," Engebretson said.

"We should legalize it because it is a waste of taxpayer dollars to be incarcerating people," Ewert said. "However we need to treat this like the other chemicals that we have legal, whether that be nicotine or alcohol. It needs to be used responsibly,"

The candidates also disagree with the Trump administration on issues including the approach to immigration, the environment and gun control.

The winner of the Aug. 14 Democratic primary will challenge Duffy in the Nov. 6 general election.