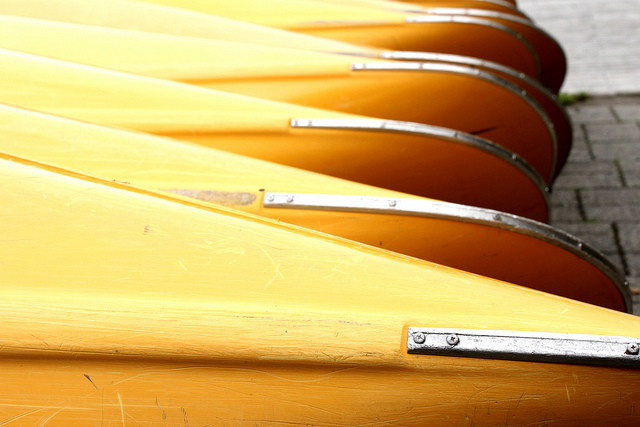 Demise Of 'Royalex' Material Has Caused Stir In Canoeing World

Every August, Darren Bush, owner of Madison's Rutabaga Paddlesports heads to the Outdoor Retailer Summer Market in Salt Lake City, Utah to get a glimpse of what’s new in outdoor sports gear.

But this year, Bush said, the buzz among retailers was less about some new innovation than about the disappearance of an old mainstay.

"One of the big stories in the canoeing world is the demise of a material called Royalex," he said. "The company that made it went out of business."

Originally developed by the Uniroyal tire company four decades ago, Bush said the "bomb-proof, whitewater-friendly material" was an industry favorite. However, there was a catch.

"It’s a very toxic material to produce. So it created what’s called a 'superfund site,'" he said. "They couldn’t shut it down because of environmental laws. They had to keep running. As long as they kept running they didn't have to clean it up."

Eventually though, explained Bush, it made more financial sense to pay cleanup costs than to keep production going.

"The labor force that made it was very skilled. It was very small, maybe six or eight people that made it. And canoeing was 90 percent of the market for it," he said. "So they just decided to mothball it."

Bush said that many retailers, himself included, bought up as many Royalex boats as they could when they heard the news.

"Everybody panicked because that's what people do sometimes when there's change," said Bush. But he cautioned that the situation isn't really that dire for paddling enthusiasts.

"The truth is, there's lots of other things out there that can replace it," he said. "There are people working on different composite constructions and new materials to try and replace that sort of flexible durability … of Royalex."