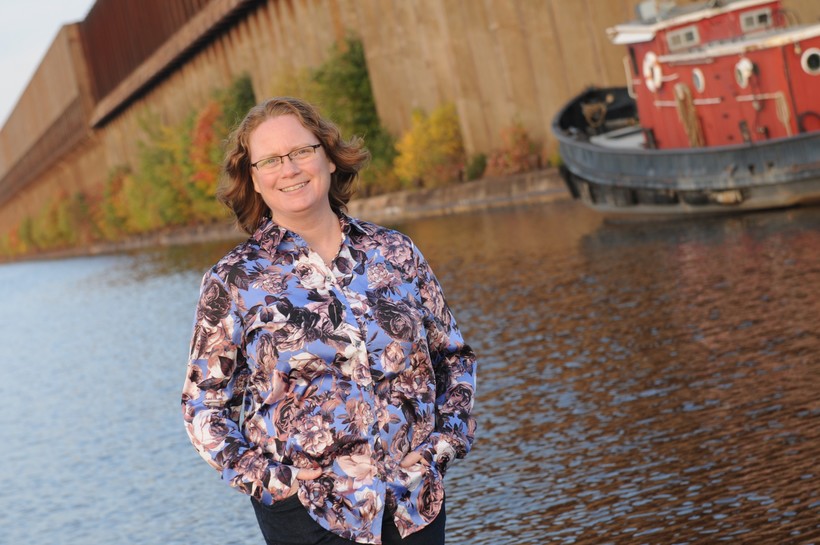 Margaret Engebretson, courtesy of the campaign.

Margaret Engebretson wants to help make Congress better, and will do so by working with Republican Party members who are focused on progress, the candidate for the 7th Congressional District seat said.

Engebretson, a U.S. military veteran, is running as a Democrat for the seat representing central and northwestern Wisconsin in the Nov. 6 election. She's up against Republican incumbent Sean Duffy and Independent Ken Driessen.

She shared her positions on platforms such as health care and tariffs with WPR's "Central Time" host Rob Ferrett.

Rob Ferrett: If elected to Congress, what would be your priority with health care?

Margaret Engebretson: I think we need to transition to a Medicare for All public health insurance program that covers everyone from the day they're born until the day they die so that never again does anyone have to worry about having health care coverage. And once we make this transition to a single payer system, we will be able to bring down health care costs across the entire system.

RF: Another big issue lately is trade and tariffs. What direction do you think Congress and the nation should take on trade policy?

ME: I think it's concerning that the Trump administration has put in huge tariffs on certain countries and he has used tariffs as a sledgehammer instead of a scalpel. Now, in some cases, there's going to be a need for tariffs. But the way they're being implemented now is causing a lot of unintended consequences within our economy.

As far as trade goes, for many of our trade agreements, we've had business interests well represented at the table, but we also need to bring in and take into account labor interests and environmental interests and be more thoughtful about the long-term impacts that these agreements have.

I definitely think we should take a look at (the North American Free Trade Agreement) and who's being helped here and make sure everyone has a voice in this. This agreement has been in place for a very long time, so a lot of the damage to labor has already occurred. It's unfortunate that we didn't do better planning ahead of time as we transition into a more global economy. But there are definitely things we can do.

RF: Immigration is a long-running issue in Congress where not too much has been resolved. What would you look for when it comes to immigration policy?

ME: Our Congress has gotten close several times to coming to a bipartisan solution to reform our immigration situation. But we haven't been successful. Now in the current climate with divisive politics, a lot of our elected leaders and people running for office are using it as a wedge to run their campaigns on. It's really unethical and dishonorable in many of these cases, what's being said.

The current immigration system does need reform. And we've seen how it really matters who is implementing policy in this nation. What we need to do is address the 11 to 12 million undocumented immigrants in this nation who are contributing to our communities — they're working, they're paying taxes and we must provide a pathway to citizenship for those who are law-abiding and following the rules.

The visa system has to be reformed. It's creating problems, especially here in Wisconsin for agriculture and we have to look at our system as a whole.

I'm going to Congress to try to help make it work better. I'm not going to get there and dig in my heels and refuse to work with people because they belong to a different party. That doesn't mean that I will forsake my values and code of honor. But I would love to work with anyone who is truly focused on progressing and getting past this point.

ME: This is a situation where the Republicans in Congress pushed through a reckless tax bill without debate, without much analysis, behind closed doors and not working with members of the Democratic party who are there representing millions of Americans.

Many outside special interests had a hand in drafting this tax bill and unsurprisingly, it's geared to give this huge tax windfall to the ultra-wealthy and corporations, leaving in place loopholes, and this was exactly the wrong thing to do at the wrong time.

If we're going to deficit-spend, we need to be doing it in ways that provides growth for the entire economy, such as investing in infrastructure, education, new technologies and working to transition to a clean energy economy.