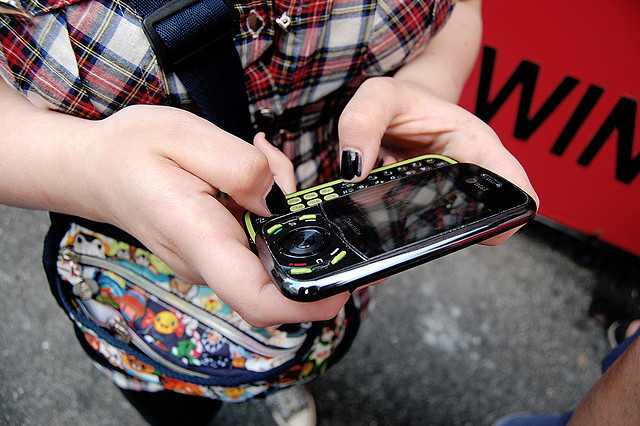 Language is being modernized at our fingertips. Photo: Zoe (CC-BY)

In Defense Of 'Textspeak': A Socio-Linguist Says Emojis And LOLs Are Modernizing English

Expert Says That Throughout History, People Have Groused About Language's Evolution
By Scottie Lee Meyers and Erik Lorenzsonn
Share:

Lauren Collister doesn't believe that the novel ways people communicate in texts, emails and tweets is corrupting the English language, as some might. In fact, the University of Pittsburgh socio-linguist says that "textspeak" is streamlining English and updating it for the 21st century.

Cellphones in particular are transforming language in ways never seen before, she said, because the technology has brought written language into everyday use and into more contexts than ever before.

Consider emoticons (also emojis, their newer, flashier cousin). Collister said that Scott Fahlman, a Carnegie Mellon professor, first introduced the punctuation-based symbols in 1982, suggesting that a smiley-face could be used to help indicate sarcasm over email.

Since then, said Collister, emoticons have become commonly used as what linguists call "discourse markers."

"Discourse markers are these little bits of language that convey the tone or the overlying meaning of what we’re saying," she said. "We usually do this in spoken language with our voice or our tone. But when you have text only, that’s not really an option. So people started using emoticons as a way to give some emotion or inflection to their writing."

Another example of how "textspeak" has changed language is the asterisk's new function as a correction device. When a person makes a typo in a text or online, they might follow up with a second message that contains an asterisk and a revised message.

Collister also noted that the way people communicate online and via text has also bled into actual face-to-face conversations — in other words, people might actually say "smiley-face" aloud as an indicator of emotion, or maybe exclaim "LOL" to express delight.

For example, Collister said that in 63 A.D., a Roman scholar groused that his Latin students were writing in an artificial language — a language that would later become French.

Blaming younger generations for changes in language is nothing new either. In her recent piece in the New Republic, Collister shared a quote from 1871 by Charles Eliot, the president of Harvard University, that echoes the prevailing "kids these days" mantra:

"Bad spelling, incorrectness, as well as inelegance of expression in writing, ignorance of the simplest rules of punctuation … are far from rare among young men otherwise well prepared for college studies," Eliot said to his Ivy League students.

That said, despite the ways younger people may be modernizing English, Collister said to not expect the next great American novel to be written in "textspeak."

"While that may be very innovative and very different and cool, it's probably not going to catch on anytime soon," she said.