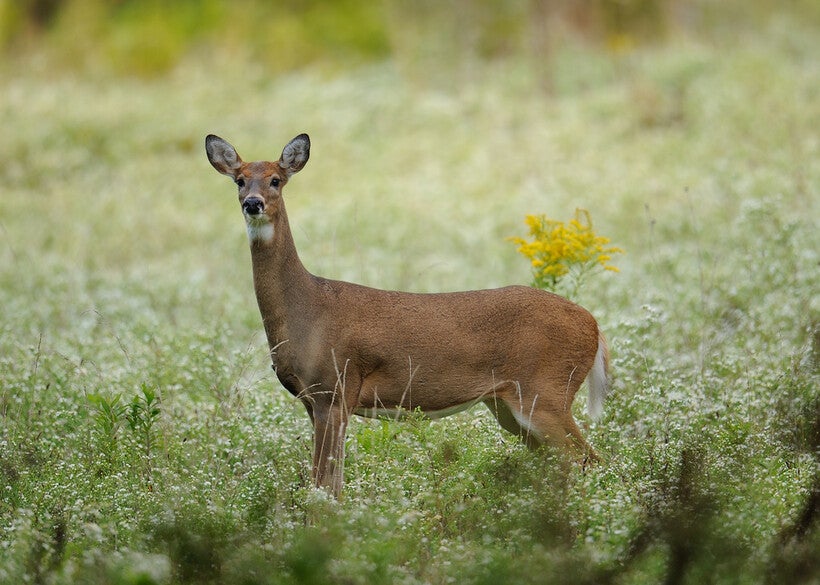 Changes Made To Antlerless Harvest Quotas, Permits In 11 Counties
By Danielle Kaeding
Share:

Northern Wisconsin county deer advisory councils have mixed feelings with the state's Natural Resources Board after it voted to cut back or change the anterless harvest in 11 northern counties last week. But, board members say a slight reduction in tags is necessary to prevent harvesting too many deer on public lands.

County Deer Advisory C­­ouncils (CDACs) provide recommendations for deer management within their county to the Wisconsin Department of Natural Resources. The agency reviews them and may make their own changes before presenting recommendations to the board for approval, which can accept or adjust harvest levels.

Greg Kazmierski, the board's vice chair, brought forward an amendment to reduce deer quotas or public land permits, saying public input showed support for fewer antlerless tags. The decision reduces the number of deer that can be harvested by about 4,600 across the 11 counties.

Several CDAC chairs voiced frustration with the decision, including Wayne Norling, chair of the Burnett County CDAC. The county was among those who will see a 50 percent cut in the number of permits they recommended for people to hunt on public lands.

“We're charged with suggesting how to manage the deer in this county via the CDACS, and they're choosing to manage from Madison anyway,” said Norling.

In Bayfield County, the change means 80 percent of permits will now be offered on private land. Bayfield County CDAC Chair Kevin Schanning said he would've liked more communication with the board before their decision.

“If they're going to change the decision without contacting at least the chairs, it seems to undermine the idea of local control,” said Schanning.

Larry Bonde with the Wisconsin Conservation Congress, the Natural Resources Board and DNR's citizen advisory group, said he was unaware of the proposed change prior to the board meeting last Wednesday.

“What we always have to remember is the CDACs are advisory, and I do know that they get very frustrated when people change their recommendations,” said Bonde.

While some counties expressed frustration, others like Lincoln and Florence counties weren't upset by the board's decision to reduce harvest levels on public lands.

In Florence County, public land permits for hunters were cut in half from 300 to 150, according to CDAC chair Dale Ebert.

“From the standpoint of what we had gone through and the numbers we had arrived at, the change made by the Natural Resources Board was pretty insignificant,” said Ebert.

Nick Schertz, chair of the Lincoln County CDAC, said he wasn't bothered by the board's decision to cut their public land tags in half. But, he's confident the council has been coming up with a good compromise between natural resource managers and the public. Schertz would like an explanation from the board on the reasons behind adjusting their quotas.

“It's probably because they're flooded with calls and emails about the fact that there's not a lot of deer in the Northwoods, which is not entirely true,” said Schertz. “I think that the people that are unsatisfied usually have the loudest voice.”

Schertz doesn't want people to lose faith in the county's recommendations for managing the deer herd. In his remarks to the board last week, Kazmierski said he didn't like going against county recommendations. But, he said deer have been over harvested on public lands for decades.

“We need to move in the direction now to get that herd back up on public land and issuing tags is the only way you can do that within a county,” said Kazmierski.

He added the state hasn't been able to manage public and private lands through separate permits in the past, but now they're able to do that. Board members say more needs to be done to manage the deer herd on private lands.

The 11 counties have set three-year population goals to either increase or maintain the deer herd. Deer population estimates in those counties were on the rise since 2014, but they've fallen in the last several years. DNR data shows the antlerless and buck harvest in the 11 counties has largely trended downward since 2000.

CDAC chairs say a number of factors have played a role in the deer population over the years including severe winters, habitat changes, predation and varying landscapes across their counties. Bill Smith, one of two board members who voted against the change, said he didn't see a crisis in northwestern Wisconsin.

“I'm as concerned as you are about the trends and what this next year will bring," Smith told the board. “I'm just not comfortable ... we're too deep into the weeds. At least in my part of the state, I'm satisfied that people are taking responsible action."

During the meeting, board member Marcy West and DNR Secretary Preston Cole questioned the transparency of the changes, which were not shared in advance with some board members or CDAC chairs.

Board chair Fred Prehn said members had only a week to review the recommendations forwarded by the DNR, highlighting challenges with meeting the agency's timeline for notifying the public about harvest levels. He also said there was difficulty sharing information while complying with the state's open meeting laws.

Kazmierski argued the recommendations from the CDACs were influenced by foresters who want to avoid deer damage, adding recommendations went against public input for lowering the anterless quotas.

The board has adjusted quotas brought forward by the DNR in the past, including when it decided to maintain this year's 10-elk harvest against agency recommendations. Prehn said he would review the process with the DNR secretary to improve communication moving forward.