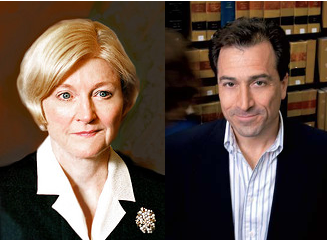 Incumbent Justice Patience Roggensack and her challenger, Marquette University law professor Ed Fallone, met for a debate sponsored by the Madison Rotary Club. In this excerpt from the longer debate, the two answer questions on campaign financing.

Justice Patience Roggensack: So, as I run my campaign, we take lawful donations -- I have a whole compliance team, which carefully looks at every donation that comes in. If you're talking about special interest money that doesn't go to a candidate, and by special interest money I'm referring to Political Action Committee money, which is a lawful kind of a contribution to a candidate - if you're talking about third-party, independent contributions, there is nothing that I can do about it. It goes under Citizens United from the US Supreme Court, and those justices wear shoes that are a whole lot bigger than mine. So if special interest groups want to get into it, as independent expenditures, there really isn't anything that a state Supreme Court justice can do about it. When I ran the first time, I asked people who might do independent expenditures to stand down, but they were not these interstate organizations that we have now. They were local people, and in fact that worked, and when I ran for this office, I got no PAC money, and no independent expenditures at all.

Ed Fallone: The problem is with making this court dysfunctional is uncontrolled, unregulated special interest money is available in judicial elections. As long as you're going to elect judges, the first thing you can do is have public financing. The Impartial Justice Act, which is on the books, and has worked effectively in the past and should be re-funded. But the second thing you want to do is absolutely not open the door wider for more campaign contributions in judicial races. Which is what the rule supported by Justice Roggensack and defended by her in an opinion piece that ran in newspapers all over the state. what it does is open the door wider. It allows campaign contributions for the first time to lawfully be made in a pending case to the judge hearing the case, and it prevents an opposing party from bringing a recusal motion based solely on that campaign contribution. When someone loses a case and they walk away from the courthouse, they have to feel they were treated fairly and impartially, and if they know that the opposing counsel or the opposing party made a campaign contribution to the judge, they will doubt the fairness of the proceedings, and it undermines people's faith in our judicial system.

Q: Next question: What steps would you favor to address the wide perception that the court has become too political, or even dysfunctional?

EF: Well, I think you begin with the campaign finance reforms that I'm advocating, here. The Citizens United case by the US Supreme Court makes it difficult to ban special interest dollars in judicial races, because the US Supreme Court has equated spending with speech, therefore making it protected under the First Amendment, and has limited the definition of the word "corruption" to essentially mean bribery or quid pro quo, which would be the only permissible grounds for banning campaign contributions. So they've made it hard to ban the contributions. If you can ban the contributions, but you want to prevent the special interest money from influencing the judicial election, and it makes it so expensive. I can tell you as a personally as a candidate now, I see how good quality people are deterred from running for office, and especially judicial office, because of the big role money plays in these races. If you're going to try and get control of the influence of special interest dollars, you absolutely at least have to return to the rule that would not permit contributions to be made to a judge's campaign committee where they sit on a pending case, and you have to allow a recusal motion when there is a six-figure, five figure contribution to a judge who's sitting on a case. One party - the party that didn't make that contribution - has to be able to bring a motion asking the judge to step aside, otherwise they are not going to feel that they're treated fairly.

PR: My heart aches a little bit with the choice my opponent has made with his campaign, because he attacks the court as an institution. The court, as an institution, is so much more important than any candidate or any justice that sits on the court right now. And the question is how to heal the perception that the court is dysfunctional. I would heal it by trying to speak positively on behalf of the court, to point out the many good things that my colleagues do, to point out that we are working hard to serve the people of Wisconsin, working hard to get decisions out in a more timely fashion than we had for a while. Working hard to carefully monitor the money, that the Supreme Court is the steward for monitoring for the whole judicial system. Do you know that I suggested and the court now has a Supreme Court finance committee for the first time in the history of this state? Our court is doing good work, and to mount a campaign that constantly labels the court as dysfunctional creates further injury to the court. We will all lose if that perception is not repaired. I will work hard to continue to repair it and to serve the public in a positive fashion.