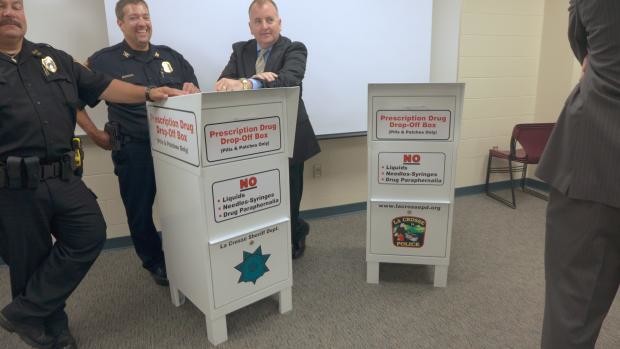 Law Enforcement Agencies Must Now Dispose Of Drugs They Collect Themselves
By Maureen McCollum
Share:

As a way to cut back on the prescription drug abuse — an issue that is often cited as a gateway to heroin and other drug addictions — the Drug Enforcement Administration introduced new rules on how to dispose prescription drugs this week.

Prescription drug drop boxes were recently installed at police stations throughout La Crosse County, which people can now use to dispose old and unused controlled substances, like strong pain killers or sedatives, anytime. In the past, law enforcement handed the medications over to the DEA. Now, local agencies will have to handle and pay for the disposals themselves. According to the DEA, police will handle and destroy medications the same way they deal with illegal drugs they confiscate.

Randy Nederlo, La Crosse County’s special waste manager, worked with the county's Heroin Task Force to set up the prescription drop boxes. He said the county needs to figure out how to fund the new procedures, but that regardless, he's optimistic about the DEA’s other new rules.

“The regulation allows for more places for dropping medications,” he said. “In the past, the only people that could accept them would be a law enforcement officer. Now, a pharmacy that is registered to dispense controlled substances can actually take them back from the public.”

DEA spokeswoman Barbara Carreno said that once pharmacies and hospitals start collecting unwanted medications, they will have to contract with a DEA-authorized company — known as a reverse distributor — to collect and destroy the prescriptions.

“Any authorized collector is going to be responsible for destroying whatever they collect. DEA doesn’t have the resources in terms of personnel or money to cover that,” said Carreno.

There are currently two reverse distributors in Wisconsin.