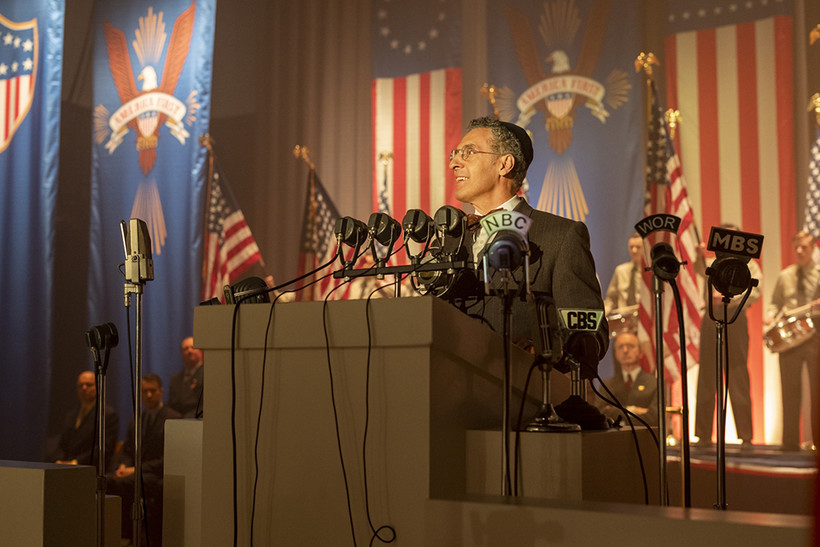 'The Wire' Creator On Working With 'A Lion Of American Literature'
By Adam Friedrich
Share:

David Simon is one of the founding fathers of prestige television. He created, along with Ed Burns, HBO’s groundbreaking series "The Wire" — which is argued by many to be TV’s greatest drama. He’s followed that up with two more critically acclaimed series — 2010’s "Treme" about post-Katrina New Orleans and 2017’s "The Deuce."

Simon has also adapted many works of nonfiction for HBO mini-series including "Generation Kill," "Show Me A Hero" and a televised version of his and Burns’ own ethnographic book "The Corner."

But, until now, Simon has never adapted a work of fiction. And he has set the bar pretty high for his first crack at it by adapting Philip Roth’s "The Plot Against America" as an HBO mini-series.

"It was a little mortifying because it was Philip Roth. I mean, this is a lion of American literature," Simon told WPR’s "BETA." "The books that I had adapted, and quite faithfully I think, were all works of nonfiction, so I couldn't take liberties. There was a real moment of mortification whenever we decided to change something or omit something."

Roth released the novel in 2004 and while many took it as a commentary on the Iraq War, Simon initially treated it simply as a fascinating, well-researched thought experiment.

"Some people think he was writing to the allegory of George Bush, but I don't think so, and I think (Roth) denied it. I just thought it was an artifact of history," he said. "It was an interesting alternative view of what might have happened at a critical moment in American history."

In fact, when Simon was first approached to adapt the novel in the wake of President Barack Obama’s second inauguration he re-read the book and thought it felt even more dated. Simon argues Roth's work is far more resonant now given our current political moment.

"Philip Roth seemed to have nailed that without even knowing about Trump or without predicting this future, he nonetheless nailed it in the novel," Simon said.

The novel outlines an alternative history where Charles Lindbergh is the 1940 Republican candidate for president and wins the election over Franklin D. Roosevelt. Lindbergh plays up American isolationism and takes a sympathetic stance with Nazi Germany to keep America out of World War II that leads to a growth in American anti-Semitism. It’s written semi-biographically through the eyes of a 10-year-old Philip.

"Philip Roth used his own family as the narrative force to explain this dry run at American fascism," Simon explains. "He imagined the events of his alternative world colliding with the lives of his parents, his older brother and himself, as well as some extended family members. So you experience this totalitarian maneuver and this Lindbergh administration and all of what goes awry in America from the point of view of this one lower middle class family in Newark, New Jersey."

Simon, himself the son of working-class Jews, was drawn to the sentiments of how fragile democracy and freedom could be. The tagline for the mini-series — "Freedom is never completely won, but it can be lost" — was a direct quote from his father, Bernie.

"My father was the public relations director for the B'nai B'rith Jewish Service Organization for about 30 years," he said. "Before that, he worked for the Anti-Defamation League. He was basically a professional Jew."

Simon recalls nearly 50 years of Passover celebrations where his father refused to let the Jewish holiday of freedom go by without reiterating that argument.

In the mini-series, Simon’s adaptation does take the aforementioned liberties from the book at both Roth’s request and with his permission. The Roth family has now become the Levin family and the series follows the perspective from multiple members of the family and not just Philip's character.

"There are a couple of big changes, one of which was we had to go to points of view that were beyond 10-year-old Philip, who is remembering his childhood from adulthood, which is the structure of the book," said Simon who collaborated with Roth before the author’s death in 2018. "That's just too much voiceover for any film to carry successfully. We had to expand the point of view to all the other family members. And by doing that, we opened up the mini-series so that it can cover more ground. Roth saw that right away and agreed that that was the way to go."

Simon also claimed that the ending of the novel was a little too "magical" for television and revised it to fit the medium better. He said that bringing that recommendation and his revised ending script pages to Roth was a bit daunting.

"I sat there while Philip Roth, great man of literature, read those two pages over again. It was probably four or five minutes. It felt like it was four or five hours while I was sitting there. And finally he closed the book, and he looked at me and said, 'Well, it's your problem now.' So I took that as permission," Simon recalled.

Simon and Roth were set to do site locations for the shoot when the author died. While Simon was deeply saddened by the legend’s passing, he admitted to "BETA" he felt a little relief he didn’t have to share further adjustments to Roth.

"I will confess to something. When he passed away, the coward that is latent inside as a writer immediately said, 'Well, at least I don't have to do that.' After we finished filming it, after we were done, I think we honored what was important in the novel in very, very key ways," said Simon. "I'm embarrassed to cop to it now, but I have to admit to it, I was scared. I was scared of showing him the pages."

Simon now wishes he could share the finished adaptation with Roth to see what the author would make of it.

"Now I would be curious to show it to him and get his reaction. You know, for better for worse, now I wish he was here in every sense," he said.

"The Plot Against America" can be streamed anytime online at HBONow.