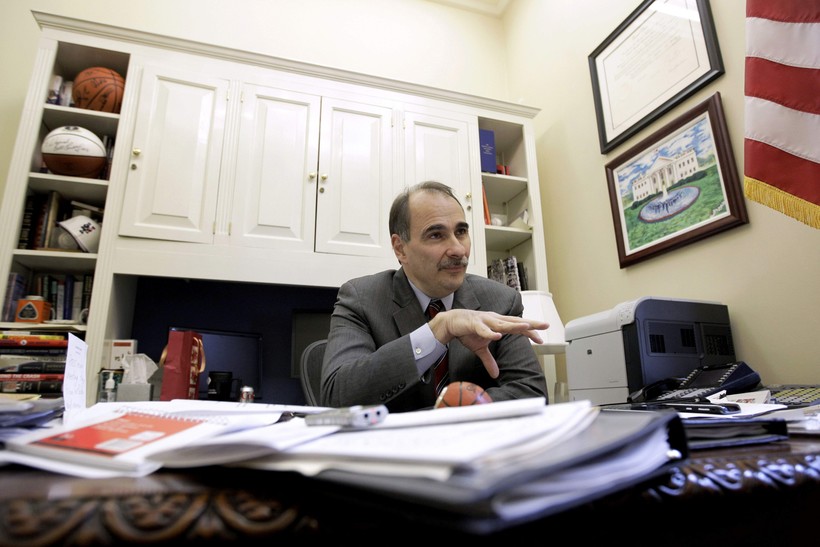 David Axelrod ran Barack Obama’s successful campaigns for U.S. Senate in 2004 and the White House in 2008 and 2012. He also served as senior advisor to the president from 2009-2011. Today, he’s the director of the University of Chicago’s Institute of Politics.

Axelrod spoke to WPR's Kathleen Dunn about his relationship with Obama, his career and the current state of politics. Below is a transcript of that conversation edited for clarity and brevity.

"I met him years ago when he was a returning law student. A woman named Betty Lou Saltzman, who’s kind of a doyenne of liberal politics in Chicago, called me and said, 'I just met this remarkable young man, I think you ought to meet.' And I said, 'Happy to meet anybody you want me to meet, Betty, but why?' And she said, 'I think he could be the first black president.' I always say I take Betty Lou to the track with me now, whenever I go."

"I met Obama, and the thing that struck me was, here was a guy who had just been president of the Harvard Law Review, and could’ve written his ticket at any law firm or corporation in America, and instead he came back to Chicago to run a voter registration drive and to practice law in a small civil rights firm. He explained to me that he had an interest in public life because he wanted to do something larger than himself. And I was really moved by that."

"The world of politics basically divides into two groups. There’s the one group that runs for their own aggrandizement, because they want to be something."

"I have maximum high regard for him. He’s a good human being, good family guy, sensitive, and very, very much committed to the notion of public service as a means of bettering the community, of helping people, of building a better future. He represents the theory of politics that I believe in, that we have the ability, through politics, to grab the wheel of history and steer it ever so slightly in the right direction."

Years after Obama and Axelrod became friends, Obama called Axelrod and said he wanted to run for the U.S. Senate. That was right after Obama had badly lost a race for Congress. Many thought he was on his last legs politically. Axelrod was reluctant. He had recently turned down an offer to work on Rod Blagojevich’s Illinois gubernatorial campaign, then watched as the campaign unfolded using "all the black arts of politics."

Watching that, Axelrod thought, "If this level of cynicism is needed, maybe I should get out (of politics)."

"So Obama and I both were going through these existential moments about our political careers, and I said to my wife Susan, 'You know, if I could help Barack get elected to the U.S. Senate, I would feel like I had done something really valuable, and that would really recharge my batteries.'"

"And that began this long association that ran through that Senate race, two presidential races, a stint in the White House, really such a rewarding journey."

"I really consider myself a storyteller. I started as a journalist. As a political strategist, I always saw my principle job in developing the message for candidates and campaigns to tell their story, to tell the stories of the people they had met along the way, to tell the story of where the country was or where a particular community was. And now I’ve got my foot sort of half back into journalism, and I’m just really interested in talking to people with great stories."

"John Lewis, of course, is an American hero. I just sat there, and I was so moved by this guy who, as a very young man just walked into the fire again and again, knowing that he might be killed, because he felt so strongly about the cause of civil rights. Just an inspiring human being, what a treat to be able to spend an hour with a guy like that."

"It’s interesting to hear his rhetoric alongside the president’s rhetoric, because his rhetoric is distinctly different."

"The reason the North Koreans want these weapons is that they think it is security against being toppled by hostile forces. The more that we feed that narrative, I think the more likely it is for some tragic event to happen."

"One hopes that rationality will take hold, and the way it likely would is if China were to exert itself more, and use their significant influence with the North Koreans to bring them to the table. That appeared to be the president’s strategy at first, was to try and pressure the Chinese. Perhaps he thinks that by threatening a nuclear Holocaust that China’s attention will be piqued. A lot of diplomats are dubious about that approach, but in fairness, this has been something that’s vexed presidents for decades, and there’s no easy answer to it."

On The State Of The Country And World Today

"I’m concerned, (but) I’m not cynical ... What has been really interesting to me in this last nine months … isn’t some of the really disturbing things I’ve seen from this president or this administration. It’s the way in which people have responded."

"In some odd way, Donald Trump has reinvigorated our democracy. You see citizens organizing to make their voices heard. I think that’s one of the reasons the Affordable Care Act is still with us. You’ve seen the courts play their role, you’ve seen the Congress play its role. You’ve seen the media really reinvigorated, understanding its role to shine a bright light in dark corners. It may frustrate the president, but that’s in the great tradition of democracy and American journalism."

"I worry about our standing in the world. I worry about needless conflict. I worry about climate change and other policies where we’re moving backward. And mostly I worry about the fact that we live in revolutionary times, times in which I believe mostly technology is churning at such a fast rate that it’s very hard for us to get our arms around all the impacts of it on the economy, on communications. And it takes wisdom and it takes a national strategy to deal with the impacts of that — people being displaced because robots and computers are now doing their jobs."

"(I worry about) a communications environment in which we can silo ourselves, and rather than being informed we are affirmed in our points of view, and we don’t hear other points of view."