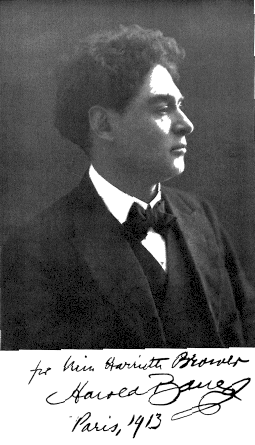 Just after the turn of the twentieth century, as he arrived to play in a Western mining town, English pianist Harold Bauer was in for a culture clash.

He traveled with Pop Bacon, a piano tuner who knew him well and warned him, “These people don’t understand sarcasm and they don’t like it.” He suggested that using it might prompt some large person to punch the pianist.

The town was, to Bauer’s way of thinking, “very wealthy and very crude.” The Opera House was packed to capacity and rang with the banging of seats being turned down as ushers hawked peanuts, chewing gum, and candy.

Bauer appeared onstage to a torrent of applause--and whistling, which he had always thought was an expression of disapproval.

All through the first piece, the racket of seats and selling continued. When Bauer finished, he waited for the applause and the excess noise to die down before continuing with, so far as he could recall, the Moonlight Sonata.

By the middle of the first movement, loud as ever, the ushers were peddling their peanuts again and the seats banged down fortissimo for latecomers.

Bauer stopped playing and, to more applause, advanced to the footlights, trembling with rage—and brimming with sarcasm. He apologized for disturbing the audience with music, for not personally turning down the seats ahead of time, and for not passing out the refreshments himself.

Backstage, Pop Bacon assured him that an attack was imminent.

Bauer played the rest of his concert to wild applause.

As the audience left and a group of solemn men approached Bauer, the piano tuner retreated upstage. A spokesman for the group made a courtly motion, referred to Bauer’s acidic lecture to the audience, and said, “We thank you, sir, for your generous gesture, but we cannot permit you to assume the blame.”

Although Bauer’s sarcasm resulted in no assault, the tuner was correct in his assertion that the locals didn’t understand it.