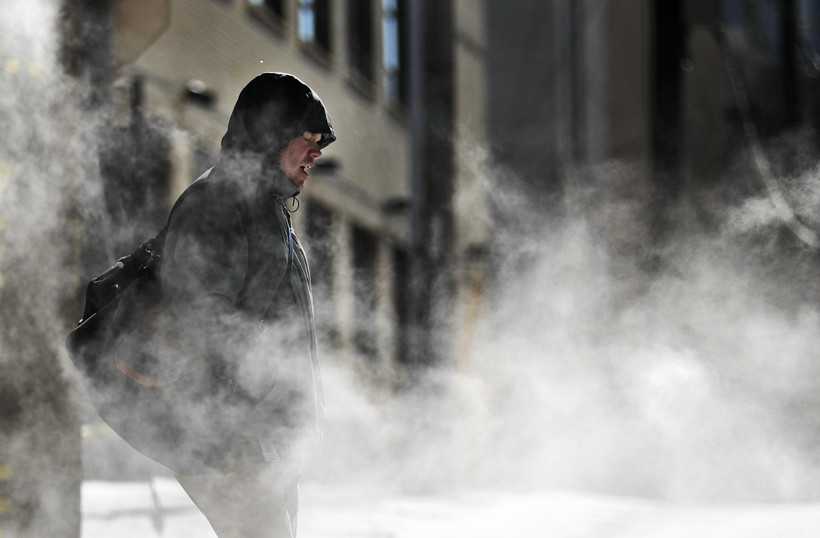 A man walks through steam venting from a building in the cold weather in Atlanta, Wednesday, Jan. 17, 2018. The South awoke on Wednesday to a two-part Arctic mess. David Goldman/AP Photo

Dangerously cold temperatures are descending on parts of the Upper Midwest.

The National Weather Service issued a wind chill advisory overnight Thursday for Wisconsin, Minnesota, the Dakotas and several other states where temperatures were expected to plunge to 30 below with the wind as a factor. The weather service says the wind chill temperatures could cause frostbite to exposed skin in as little as 10 minutes.

There is increasing confidence in significant, bitterly cold air arriving in the Northern Plains, Midwest and Great Lakes in the middle of next week. The cold should last for several days, with wind chills well below zero in some areas. Graphics show Wednesday forecast. pic.twitter.com/agZ9uqu2D4

Tyler Hasenstein is a meteorologist at the National Weather Service office in Chanhassen, Minnesota. He told WPR Thursday that a wave of arctic air and high winds are moving in to the region following the recent snowfall across southern Wisconsin, Minnesota, and northern Iowa. He said another round of snow is expected to move into northern Illinois, northern and central Iowa and southern Wisconsin Monday followed by another wave of arctic air next week.

"It looks like Wisconsin is going to be dead set in this cold air from about Tuesday through Thursday," Hasenstein said. "We’re talking temperatures that will very much struggle to reach zero and then with wind chills in the negative, at least, teens if not twenties for most of it as well even during the peak of the afternoon."

Hasenstein urged residents to take the combination of wind and extreme cold seriously.

"So, completely bundle up especially when you have high temperatures that look to be in the negative teens for highs Tuesday and Wednesday," said Hasenstein. "You don’t want to be outside for more than a few minutes with exposed skin or you’re risking frostbite."

National Weather Service La Crosse meteorologist Todd Shea likened the mass of cold air bearing down on Wisconsin to the polar vortex that hit the state in late 2013 and early 2014.

"Coming into Minnesota and Wisconsin and the western Great Lakes, it’s a little bit farther south than it normally gets but that’s why we’re expecting those subzero readings," said Shea.

"When you start talking about at least the potential for record cold next week it’s important for people to make sure their cars have been checked and can handle the even colder temperatures."

Shea also recommends checking for exposed pipes in homes, checking on elderly relatives and keeping pets inside as much as possible.

The deep freeze caused organizers of the Winter Carnival in Minnesota to cancel the parade Thursday night through downtown St. Paul and several other events. The 11-day carnival is guided by the city's policy which says events can go on as scheduled unless the wind chill is 25 below or colder.

In South Dakota, the city of Sioux Falls closed its six outdoor skating rinks and warming houses because of the cold weather.

In La Crosse the Salvation Army has announced it will increase it's shelter capacity from 80 to 90 beds and will allow patrons to stay overnight even if they've violated shelter rules in the past. Development Director Nick Ragner said they want to welcome as many people as possible.

"Tonight, Friday, Saturday and Sunday we are hoping to offer our services to more individuals to help them escape the elements," said Ragner. "We’re working with the local police departments to make sure our facilities are still safe even though we’re kind of increasing our capacity."

The Salvation Army in Milwaukee is opening warming centers at it's churches in Greenfield, Oak Creek and Milwaukee during business hours Friday.

Forecasters say the frigid weather will stick around with next Wednesday's high expected to be minus 1 in Wisconsin.