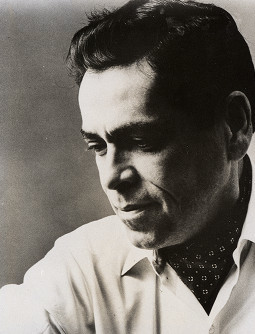 One night in 1994 72-year-old pianist Abbey Simon and his wife were in The Hague, crossing a street in a rainstorm when an inattentive driver smashed into them. Simon’s wife was badly injured. His own injuries were not life threatening, but he had four broken fingers. The pianist’s doctor was blunt. “The bad news,” he said, “is that you’ll never play the piano again. The good news is that we can experiment because we have nothing to lose.”

The “good news” gave Simon little comfort. “I was in hysterics,” he recalled a few years later. “I used to come home from the hospital after a day spent caring for my wife and doing my physical therapy and just sit around and cry. I couldn’t figure out what to do with the rest of my life.”

The doctor’s experimental therapy included micro casts for each finger and playing chess with pieces attached to the board by Velcro. Simon began by teaching himself to play five notes in a row without pressure.

Some of the damage proved permanent. The second finger of his right hand remained very crooked, requiring him to re-finger everything he played and his hand span had shortened, making some kinds of chords particularly hard to play. If a chord was otherwise impossible, he allowed himself to roll it, and in extreme cases, settled for omitting a note.

Simon made a remarkable comeback. Just three months after the accident he was in Carnegie Hall, performing Liszt’s virtuoso Transcendental Etudes. At the turn of the twenty-first century was giving fifty concerts a year.

The cure had required determination, hard work, and a few compromises. It also required Abbey Simon to trust the doctor and his experimental treatment. So it was all for the best that only after his recovery a friend told Simon that she blamed the doctor for ruining her daughter’s hand.