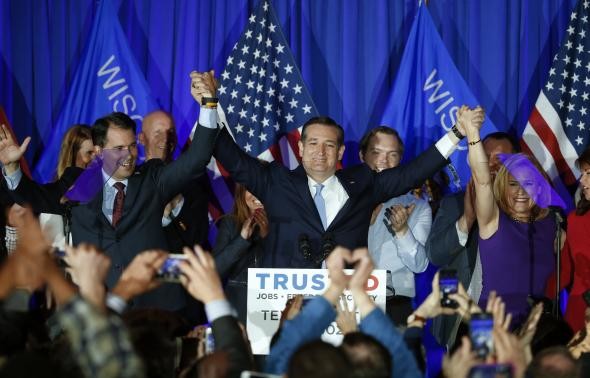 In his speech following his victory in Wisconsin's Republican presidential primary on Tuesday, Texas Sen. Ted Cruz thanked Gov. Scott Walker for his leadership. According to two media experts in the state, he also should have thanked several conservative talk radio hosts.

Milwaukee-based radio hosts Charlie Sykes, Mark Belling, Vicki McKenna, Jay Weber and Jeff Wagner heavily criticized real estate mogul and GOP frontrunner Donald Trump in the run-up to Tuesday's primary, calling him a fraud, thin-skinned and not a conservative. At the same time, they praised Cruz for his staunch conservatism, saying he was the party's best shot of stopping Trump from winning the nomination.

Those sentiments weren't just on Milwaukee airwaves. Jerry Bader echoed them in Green Bay, while McKenna's message also found purchase with listeners in Madison, Eau Claire and La Crosse via her second show.

Looking at Cruz's performance on Tuesday, it seems he performed best in those listening areas. In a three-person race with Trump and Ohio Gov. John Kasich, Cruz won with 63 percent in Washington County, 61 percent in Waukesha County and 60 percent in Ozaukee County. He also took 51 percent in Brown County and 47 percent in Eau Claire County.

"If you look at the map of the counties of the state and you look to see where Cruz did really, really well and where he really started to pull away from Donald Trump, and if you were to put over that map an outlay or overlay of the talk radio reach and its listening audience, I mean, it's almost exact," said University of Wisconsin-Milwaukee senior journalism lecturer Jessica McBride on Thursday.

Trump dominated in northern, northwestern and southwestern Wisconsin, where conservative talk radio has little presence. Overall, Cruz won the state with 48 percent, Trump finished second with 35 percent and Kasich was third with 14 percent.

While Republican voters in Washington, Ozaukee and Washington Counties — also known as the "WOW" counties — are considered to be the most conservative in the state, McBride said talk radio didn't merely reinforce their right-wing beliefs. She said that only about a month ago, Cruz was not beloved by the hosts, Republican voters, or the so-called "Republican establishment," and that Florida Sen. Marco Rubio was the preferred candidate.

McBride said that what was remarkable was that these hosts came to comprise a very united front against Trump, and for Cruz.

"What talk radio did is they created a narrative and they did this in unison. It wasn't just one of them," McBride said.

Ultimately, unlike in other states, Wisconsin's conservative media "managed to rally the opposition to Trump around a single candidate," McBride said.

Tony Palmeri, a communications professor at University of Wisconsin-Oshkosh and media columnist for the Fox Valley SCENE, said the right-wing hosts took an immediate dislike to Trump. He cited a recent New York Times article in which Sykes said that Trump poses a "fundamental challenge to the conservative movement" and that it's Skyes' mission to stop him.

In a March 28 interview that received national attention, Sykes took Trump to task for retweeting an unflattering imaging of Ted Cruz's wife, Heidi, making disparaging comments about women and criticizing Walker's performance as governor. He was also grilled in an interview by Bader and hung up on McKenna after a spirited discussion.

Palmeri suggested that Trump's remarks about Walker may have done the most damage.

"Let's face it, Gov. Scott Walker has had a very high approval rating among the Republican base. Donald Trump has called out Scott Walker as incompetent and as a failed governor. And the right-wing radio, which has carried water for Walker for many years now, came to his defense," he said. "I think that's what this was all about."

Palmeri also said that conservative talk radio is "scared" of Trump's appeal to working-class people who are less formally educated. He likened Sykes' 2013 book, "A Nation of Moochers: America's Addiction to Getting Something for Nothing," to the comment made by 2012 GOP nominee Mitt Romney that 47 percent of Americans are freeloading off the government. He said that many of those "moochers" are attracted to Trump and applauded his criticisms of House Speaker Paul Ryan, who Palmeri claimed has an "open invitation" to conservative radio shows.

Republican presidential nominees have lost Wisconsin in every general election since 1988. Palmeri said that the state's right-wing hosts appear to want to "lose with Cruz" this November because he has limited appeal outside of core Republican voters. He insisted that Trump would have a better chance due to his strong following among Reagan Democrats.

"If Ted Cruz were the Republican nominee, I think they are looking at (Barry) Goldwater '64 numbers, an out-and-out disaster for the Republican party," Palmeri said. "Right-wing radio in Wisconsin would've been one of the reasons."

As for talk radio's influence in the fall general election, Palmeri and McBride agreed that conservative talk radio would have little effect because of the large number of independent voters who don't listen as often or as closely.

"On the Campaign Trail" can be heard each Thursday at 7 a.m. on the Ideas Network of Wisconsin Public Radio.