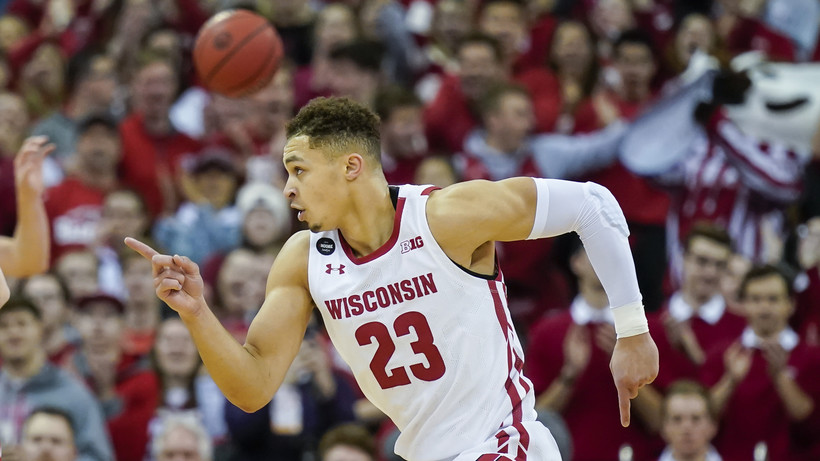 Wisconsin's Kobe King (23) during the first half of an NCAA college basketball game against Nebraska on Tuesday, Jan. 21, 2020, in Madison, Wis. Andy Manis/AP Photo

At Critical Point In Season, Badgers Make Headlines Off The Court

The University of Wisconsin-Madison men’s basketball team is halfway through conference play with a big game Saturday against the Big Ten-leading Michigan State Spartans in Madison.

The Badgers are 5-5 in Big Ten play with 10 games remaining in the regular season. Their performance down the stretch will make or break their March Madness hopes. It’s a critical point in the season for the Badgers, but the team made headlines this week for off-the-court developments.

Wisconsin was at the University of Iowa on Monday. The Badgers fell to the Hawkeyes 68-62 despite leading by 12 deep into the second half. In Iowa City, Wisconsin was without redshirt sophomore Kobe King, the team’s second-leading scorer.

King, who averaged 10 points per game for the Badgers this season, announced Wednesday he has left the team and plans to transfer.

"This has been a very tough decision for me, however, after spending almost three years in the Wisconsin program, I have realized that this program is not the right fit (for) me as a player and person," he wrote in an Instagram post.

At a Thursday news conference, Badgers coach Greg Gard said he supports King’s decision and wishes him the best.

"I really love the kid like one of my own, but we all go through decisions that we have to make at different points of our life, and I respect that," he said.

According to the Wisconsin State Journal, King said he’s had concerns about playing under Gard since he was a true freshman. Many Wisconsin fans took to social media Wednesday to decry the La Crosse native's decision to leave the program in the middle of the season, but he also received messages of support from teammates including Nate Reuvers, the Badgers’ leading scorer this season, and D'Mitrik Trice.

When former Badgers guard Zak Showalter posted a comment on Twitter that appeared to be critical of King’s decision, a current Miami Heat player came to his defense. Tyler Herro initially committed to UW-Madison before deciding the University of Kentucky was a better fit.

Herro played just one season for the Wildcats before becoming the 13th pick in the 2019 NBA Draft. If he’d gone to Wisconsin, he replied to Showalter, he’d still be there instead of playing professional basketball.

The Badgers don’t have a history of recruiting "one-and-done" players, or players who spend one year in college before declaring for the draft. In fact, Gard’s predecessor Bo Ryan told CBS in 2015 Wisconsin isn’t interested in "rent-a-players."

During Saturday’s game against Michigan State, Wisconsin will also be without Brad Davison. The junior guard was suspended and publicly reprimanded by the Big Ten for a flagrant foul against Iowa in which he appeared to intentionally hit a Hawkeyes player in the leg.

"We will not tolerate behavior that compromises the health and safety of our student-athletes or crosses the line of aggressive, competitive play, especially when a pattern of similar behavior has been previously established," said Big Ten Commissioner Kevin Warren.

Gard said Thursday he didn’t agree with the conference’s decision. Trying to "legislate intent" becomes a slippery slope, he said.