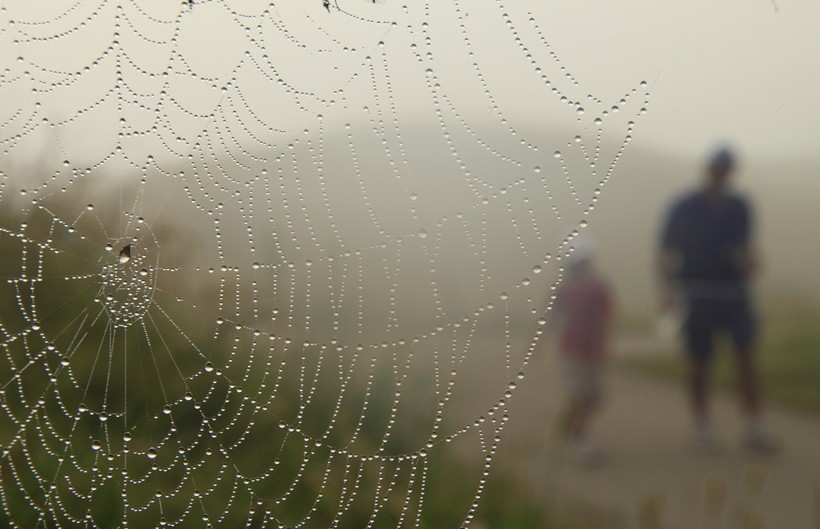 Golf fans walk past a wet spider web during a fog delay before the start of the first round of the PGA Championship golf tournament Thursday, Aug. 12, 2010, at Whistling Straits in Haven, Wisconsin. Charlie Riedel/AP Photo

Wisconsin is home to more than 500 species of spiders, and a new study finds the world’s spider population may be the greatest carnivores of all.

The study published in The Science of Nature finds all the spiders on Earth consume between 400 million and 800 million metric tons of insects, springtails and other invertebrates each year.

Those huge numbers require some context, said biologist Michael Draney, who chairs the Department of Natural and Applied Sciences at the University of Wisconsin-Green Bay and researches spider conservation efforts.

"What that is is about the amount of meat that all the people in the world eat every year," Draney said. "We’re eating about the same amount in meat and fish as the spiders are eating in insects. That gives you an idea of just how important these spiders are to the global ecosystem."

Still, spiders tend to get a bad rap — blamed for unfamiliar bites on people’s skin and feared for looking scary. Draney said there’s nothing to fear because a very small fraction of the 45,000 identified species of spiders in the world actually bite people. But researches believe arachnophobia could have a very long lineage.

"A lot of biologists speculate that our nonhuman ancestors from a long time ago were actually threatened by large spiders, and so there might be something innate in our nature to fear them," Draney said.

A brown recluse spider may bite. But the chances of being bitten by one are very improbable in Wisconsin because it's outside their range, Draney said, adding that many skin conditions have been misdiagnosed as brown recluse bites.

"Brown recluses are blamed for a lot of symptoms that people get for a variety of other causes, especially bacterial infections which are on the rise in a big way with the advent of antibiotic-resistant bacteria, like MRSA," the biologist said.

Brown recluses are venomous, but about 90 percent of bites heal on their own, according to a study by dermatologists who treat these specific spider bites and published last month in ScienceDaily.

Researchers estimate there are about 25 million metric tons of spiders traversing the globe. In Wisconsin, spiders have to make an extra effort to survive harsh winter weather.

"Their blood has these antifreeze compounds which are very similar to the compounds we put in our radiators of our cars, propylene glycol. They make glycol which lowers the freezing point of their blood. They don’t freeze at 32 degrees Fahrenheit," Draney said.

"They might freeze at 25, 20 or even 15 degrees Fahrenheit. They find sheltered areas, and basically just hang out underneath the snow, leaves and cracks in bark. When the weather gets warm, they’ll come back out again."

Draney’s home is spider-friendly. He rarely relocates a spider outside, and he urges people to let them go about their business since they prey on so many insects.