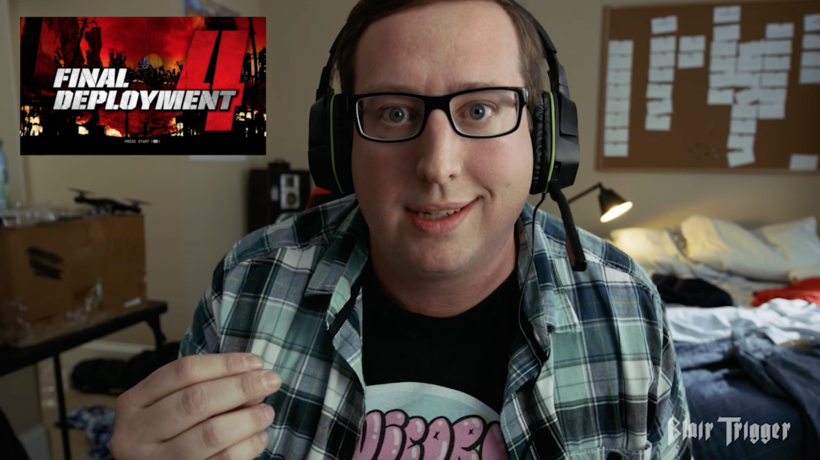 New Video Addresses Question Of Whether We Control Our Media Or Our Media Controls Us
By Doug Gordon
Share:

Do you remember that surreal, trippy Adult Swim video that took the internet by storm a few years back? The one called "Too Many Cooks"?

It starts out as a parody of the opening credit sequences of sitcoms from the 1980s and 1990s, complete with an incredibly accurate jaunty theme song. But then it gets progressively weirder and weirder.

Casper Kelly — the brain behind "Too Many Cooks" — has now unleashed that wild imagination into the realm of video games with a video called "Final Deployment 4: Queen Battle Walkthrough," which Kelly co-created with Nick Gibbons.

"One of us had the idea of doing like a 'Gears of War' Space Marine," Kelly told WPR's "BETA". The space marine is a common trope in video games and Kelly and Gibbons thought it would be interesting to pursue the idea of what life would be like for that type of character once the war had ended.

They built on the premise by adding the idea of walkthroughs within walkthroughs — à la those nesting Russian matryoshka dolls — and the feeling of being controlled.

"Hopefully, we can all relate to this feeling of sometimes we don't feel like we're in control of our lives," Kelly said.

So what exactly is a video game walkthrough?

"It's usually on YouTube or Twitch," Kelly explains. "And it's a screen capture of a video game and a person talking over it. Or there might be a little window in the corner where you can see them talking. And they either play the game for fun just for your amusement, or they show you and demonstrate how to get past a tricky part on a certain level."

Like "Cooks", Gibbons' and Kelly's new video starts typically and progresses into the bizarre. Near the end, "Final Deployment 4" explores some pretty deep philosophical questions about things like free will, whether or not it exists, and also whether we control our media or our media controls us.

"Well, that’s very much just something I struggle with," Kelly said. "I play a lot of video games and I know they’re designed to be addictive. And some of these games are even designed that you can’t play them. There’s a timer or your energy has to refill and you literally can’t play for a while. And it’s sort of just to train you to come back regularly and to build these habits. So it’s very much about my own struggles with ... I don’t know if I would say addiction to games but, I certainly play them too much so maybe that is the definition."

Kelly continued: "But also just there’s so many things in life that intellectually I want to do and it’s the smart, right thing to do. But the animal part of my brain is like 'No, you’re not gonna do that, you’re gonna do this thing instead.' It just kind of sprung up from the idea of you being a character in somebody else’s video game."

"Too Many Cooks" was released in 2014 and was an instant internet sensation. It has received millions of views. Rolling Stone called it an "instant cult classic." Director Rian Johnson even said it should have been nominated for an Academy Award for Best Short.

Kelly said that he was trying to channel his inner Andy Kaufman when he came up with this idea.

"I wanted to do something kind of Andy Kaufman-y. He did this famous standup routine where he would read from 'The Great Gatsby.' And then when people started to leave, he would put the book down and act like he’s about to start the routine proper. And when people settled back down, he would read from the book again. So it was kind of just wanting to do something like that and I just hit upon sitcoms with characters smiling to the camera and their name coming up was a funny feeling of something to repeat. And that’s basically how it started."