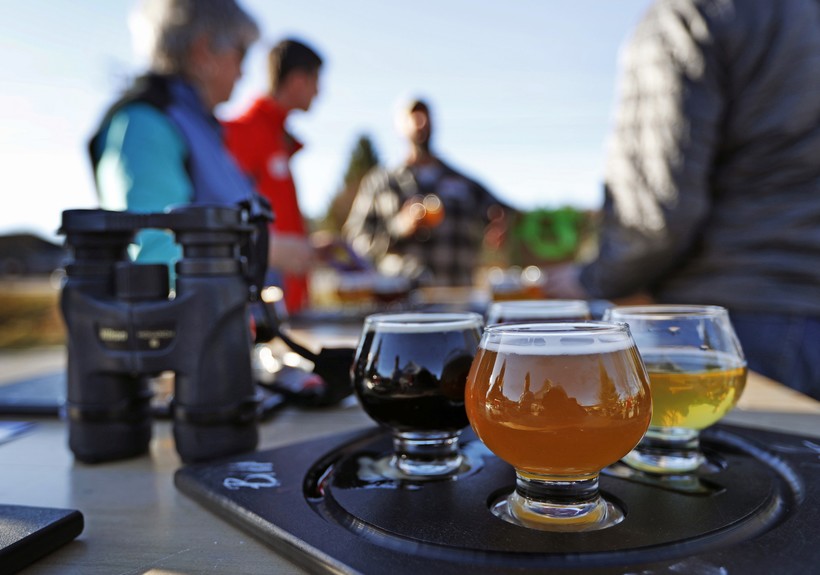 In this Sunday, Nov. 13, 2016 photo a group of birding enthusiasts finish discussing their day while sampling a flight of beers at the Maine Brewing Company in Freeport, Maine. Robert F. Bukat/AP Photo

Minhas Craft Brewery in Monroe ranks 12th in the top 50 craft brewing companies in the United States, according to the Brewers Association annual ranking released this month.

It’s the highest showing for Wisconsin in the 2016 craft brewing category that’s based on beer sales volume, published by the trade group representing small, independent brewers.

Beer making has enjoyed a long history in Wisconsin, and the boom of craft breweries over the past few decades doesn’t seem to be slowing down. Regional beer writer Robin Shepard tracks craft brewing trends and says two new breweries open every day in the U.S.

"Anyone who’s walked into a grocery store or a beer store lately certainly sees the impact and the interest in craft beer. It’s amazing what our choices are in front of us," Shepard said.

Shepard doesn’t see a saturation point yet with about 5,000 breweries nationwide.

"When we crossed the threshold of 2,500 breweries several years ago in the U.S., everybody started talking about is there a bubble out there? When is this going to crash?" Shepard said, who’s written a series of guides to the beer industry, including "Wisconsin's Best Breweries and Brewpubs: Searching for the Perfect Pint" published in 2001.

"Embracing their experience and ability to thrive and overcome challenges, the top producing craft brewers will continue to inspire, innovate and influence the future of beer," Watson said in a release.

Shepard notes the double-digit growth rates in brewery barrelage in recent years. He finds production rates today are slightly down for some craft breweries, but not firmly across the board.

New Glarus Brewing jumped up four spots to No. 16 in the craft brewing category after producing more than 219,000 barrels of beer last year, a 12 percent increase over 2015.

The most popular craft beer right now is "anything hoppy," said Shepard. Shepard said it’s the millennial demographic that is overwhelmingly reaching for craft brews, making up 57 percent of the market of consumers, according to a 2016 industry survey.

"When you go out to have a beer with friends, if you go out to a tap house, you’re beginning to see that young crowd who is excited about local and finding beers. That’s driving it a lot. Beer tourism is exploding right now," Shepard said.

A State of the Industry report will be delivered during the annual craft brewers conference in April in Washington. The Association’s full 2016 industry analysis will be published in May.