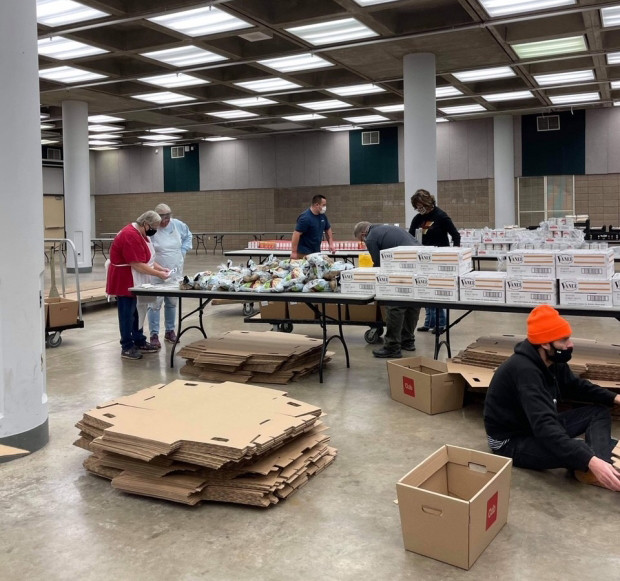 Volunteers for the College of St. Scholastica pack up food that is being delivered to families for the Thanksgiving holiday. Various groups including Mayo Ambulance and the 148th Fighter Wing with the Minnesota National Guard are helping to deliver meals on Thanksgiving. Photo courtesy of Monica Hendrickson

Annual Holiday Events, Food Banks Pivot At A Time When Demand For Services Is Surging
By Danielle Kaeding
Share:

Many people are avoiding large ­­­­­get-togethers this Thanksgiving, with federal health officials advising against gathering with people outside your household this holiday. But the coronavirus is also transforming annual events that provide food for those in need, as well as the way food banks are operating at a time when demand for food is surging.

Every year, the Twin Ports Thanksgiving Buffet typically serves around 4,000 people at the Duluth Entertainment and Convention Center. This year, the event's organizer Monica Hendrickson said volunteers have been delivering kits that will provide up to 3,500 meals that families can put together on Thanksgiving.

In addition, she said 150 event volunteers will help deliver 3,000 home-cooked meals on Thanksgiving Day for people who are confined to their homes across Duluth-Superior, northern Minnesota, and northern Wisconsin.

"We actually exceeded our family meal kits, and we had to turn some people away," said Hendrickson. "But, we were able to fulfill the need with individual meals on Thanksgiving, and you have people that cry. We've been blessed a million times."

Hendrickson, who works for the College of St. Scholastica, said college faculty and leaders began meeting in the spring to discuss scenarios to provide food for those in need during the pandemic. Event volunteers are also providing 1,000 bag lunches to people who are homeless on Thanksgiving.

Advocates for people facing hunger have also been forced to reimagine how they provide access to food as demand surges. Food banks in Wisconsin are serving hundreds of thousands more people than normal during the coronavirus pandemic. 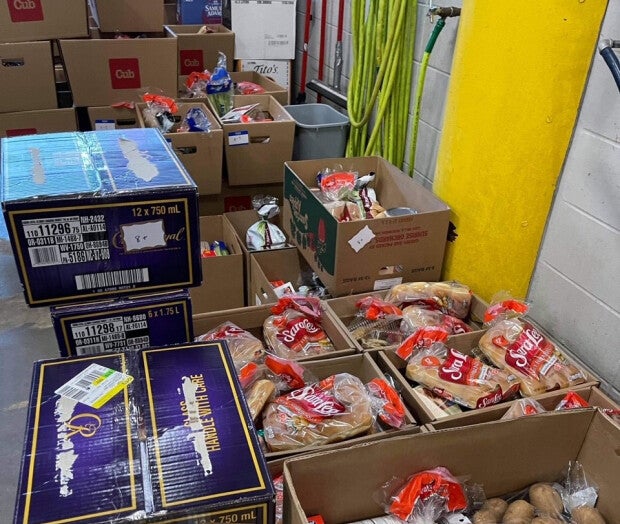 Family meal kits were put together and delivered to families for Thanksgiving in place of an annual community buffet. Photo courtesy of Monica Hendrickson

Patti Habeck, CEO and president of Feeding America Eastern Wisconsin, said the food bank has seen a 36 percent increase in demand as they're currently serving just under 600,000 people. Habeck added 36 million pounds of food has been distributed through October this year — up from roughly 30 million pounds at the same time last year.

"And November numbers will just shoot that through the roof, because we've done more in November than any other month so far," said Habeck.

She said that's due in part to increased demand during the holidays and more purchasing of food through CARES Act funding made available by the state.

Gov. Tony Evers announced $15 million in funding earlier this year to support food banks that have been pivoting to meet needs during the coronavirus pandemic. Food banks have been challenged by disruptions to their supply chain, a decrease in donations and volunteers who may be forced to isolate or quarantine.

Habeck said they've had to increase storage or purchase freezers as they've seen influx of food through government programs. She added that they've also been providing mobile food distribution, where anywhere from 500 to 900 cars pick up food at drive-through sites in communities across the Fox Valley and surrounding Milwaukee.

"With the holidays ... we've been sourcing and procuring a lot of food, to make sure that we're moving it out," said Habeck. "We know that not only are the kids out of school right now, but more and more schools are closing, which puts more pressure on the families."

Moris said around 16,000 people have been visiting the pantries they serve each month, marking a 7 percent increase since August. Around the holidays, the food bank normally sees an increase in demand as families face increased heating bills or medical costs during cold and flu season.

"We're just a little bit nervous going into the holidays, then into the New Year to see what (demand) is gonna look like," said Moris.

She said they're anticipating that a growing number of COVID-19 cases may prompt people to stock up on food as they did earlier this year. In addition, she said new state restrictions, such as the temporary closure of bars and restaurants in Minnesota, may put increased pressure on food shelves they serve.

Food banks are also preparing for the possibility that coronavirus assistance programs under the U.S. Department of Agriculture, such as the Farmers to Families Food Box program, may not continue past the end of the year without any extension.

"There was just a lot of initiatives that government put in place to make sure that we and our programs were stable, so we're hoping that there's a new renegotiation of that," said Moris. "But right now, we don't know. So, we have to estimate we're going to be operating on a lot less food."