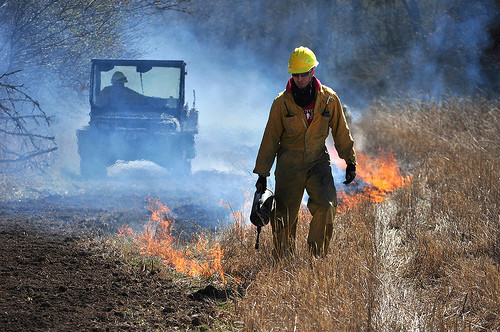 An especially wet and late spring in Wisconsin has left forestry officials at the Department of Natural Resources scrambling to complete necessary prescribed burns on state lands. This delay could give invasive plants a free pass and could make later management more expensive.

Each spring Ralph Sheffer and his fellow fire operations specialists take to the state's prairie grasslands and burn them to the ground. This kills off the more aggressive invasive plants and keeps brush and unwanted trees from eating up the prairie. Sheffer says normally they've got about two and a half months to burn, but with the snow on the ground up north and rain in the south, they're way behind.

Last year was dryer than usual but Sheffer says this late spring means the time he can do prescribed burns will likely be cut by four to six weeks.

Sheffer says it's more critical to burn on some lands than others and if any of those are missed they'll have to use other approaches.

"We may have to go out and use other means - like mechanical or chemical - in order to treat it, in order to maintain them in some of the more critical areas where it may be a make or break."

Sheffer says prescribed burns are much faster and more effective way to remove problem plants before they take over managed grasslands. He says chemical or machine treatments cost more.