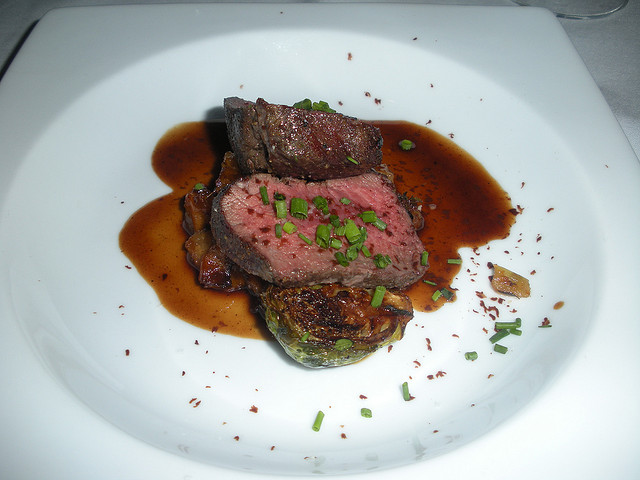 Game, like venison, is best enjoyed in dishes where its taste is at the forefront. Photo: Katherine Lynch (CC-BY-NC-ND).

With frigid temperatures across Wisconsin, some hunters are taking advantage of the game that’s in the freezer to cook up a hearty meal.

“That’s really the payoff for most hunters,” said Scott Craven, an emeritus wildlife specialist with the University of Wisconsin-Extension. “You sit down to a meal where the centerpiece is a pheasant breast or a venison chop or a stew … produced from the game that you’ve harvested.”

Added Craven: “It’s a chance to share that, and enjoy it, and kind of relive the hunt and the memories associated with it. That’s really the culmination of the whole experience.”

Craven said that bringing home meat and preparing it go hand in hand.

“Most hunters, at least in the circles that I travel in, are surprisingly good cooks,” he said, “and really enjoy preparing what they’ve harvested.”

Hunting and consuming game has also become appealing to the growing locavore and slow food movements, said Craven — an appeal that has become a strong tool for recruiting new hunters.

For Craven, good game cooking starts long before the meat is in the kitchen. In fact, he said that how the animal is handled and processed in the field is key.

“Hopefully when the animals were harvested, the hunter took proper precautions in the field-dressing and to avoid contamination,” he said.

That field care includes proper refrigeration, Craven said, “and getting them back home in the best possible shape and then processing in good, clean conditions.” He added that the goal is not just meat that is safe from a health and sanitation standpoint, but also “free of bullet or bone fragments, hair, or feathers.”

Living and hunting in an area that has chronic wasting disease in the deer herd means that Craven now only freezes venison that has been de-boned — not a bad thing, he said, given that bones take up more space and are harder to wrap without the paper being punctured.

The exception to Craven’s guideline about boning meat before freezing is pheasant legs. He said that he collects those until he has six to eight available and then cooks them using a slow, moist method. The meat that comes off of the bones can be used in a variety of preparations, and the broth can be used in soups and stews.

Craven and WPR host Larry Meiller taught a game cooking class for UW-Extension many years ago. Craven said that Meiller’s venison stroganoff recipe was always a favorite with the attendees. He added that when his own children were young, that was their “go-to recipe.”

“It was so easy, and you could use just about any cut of venison in it, and the kids loved it,” he said.

Another favorite recipe for both of them is a venison scaloppini.

An important thing to remember when cooking game, said Craven, is that the meat is generally quite delicate, so avoiding overcooking is key. He added that choosing recipes where the game “is allowed to shine and display its flavor” is important, especially if someone not used to eating game will be at the table.

For those who want to explore game cooking, it’s hard to find a better place to do so than Wisconsin, Craven said.

“All in all, especially in a state like Wisconsin where we have lots and lots of hunters and abundant game,” he said, “people want to get the most out of what they harvested and put something on the table that’s a quality, enjoyable and tasty product.”