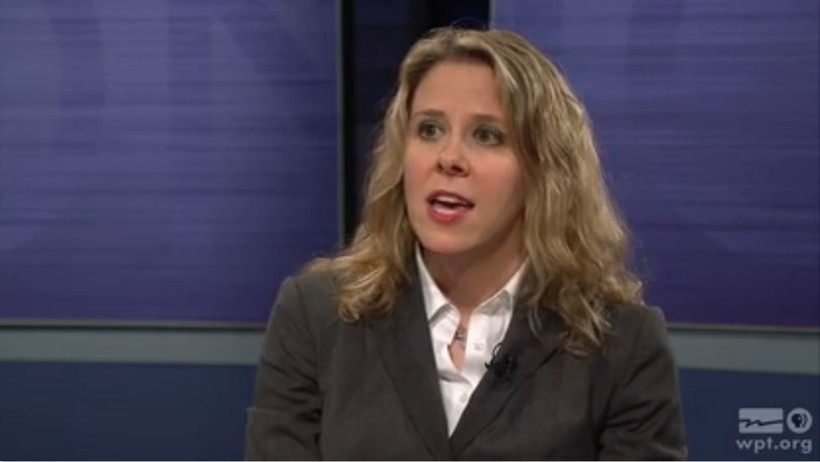 Supporters and critics of Wisconsin Supreme Court Justice Rebecca Bradley are weighing in on a series of controversies that have battered the candidate in recent days, ranging from anti-gay writings that she penned in college to allegations she acted unethically when she represented a former boyfriend in a 2005 child custody case.

Bradley was appointed to the state's highest court last fall by Gov. Scott Walker after the death of Justice Patrick Crooks.  She now faces Wisconsin Appeals Court Judge JoAnne Kloppenburg in the April 5 election with a 10-year term at stake.

With the election only weeks away, Bradley has had to fend off the allegations, most recently the Milwaukee Journal Sentinel report that suggests Bradley's participation in the custody case was unethical.

The Journal Sentinel reported that according to 2005 court documents, Bradley had an "extramarital affair" with J. Andrew Bednall, the former chief operating officer at a law firm where both had previously worked.  Bradley, then a private attorney, represented Bednall during a child placement case.  She stated that their relationship ended in November 2002 although they continued to date nonexclusively.  Bradley and her husband, Gordon Bradley, divorced in 2004.

In a Thursday piece on the Right Wisconsin website, Gordon Bradley wrote that he and Rebecca were separated at the time of her relationship with Bednall and called the Journal Sentinel’s headline -- "Bradley extramarital affair, role in child placement surface" -- "false" and "malicious and despicable."  He also wrote that a judge found "no ethical conflict" with her representing Bednall in the child placement case.

In a letter released by Bradley’s campaign, Gordon Bradley called on voters to reject the allegations in the story and accused the Journal Sentinel of being "a pawn of Judge JoAnne Kloppenburg and her liberal Madison friends who will say anything to tear Rebecca down."

Ultimately, court documents show that the judge in the case denied a motion from the man's ex-wife to remove Bradley from case because of her prior relationship.

Attorney Rick Esenberg of the Wisconsin Institute for Law and Liberty said that makes it clear there was nothing unethical about Bradley's role in the case.

"This is one of the most vile and disgusting attack campaigns against anybody that I’ve seen in Wisconsin politics," he said. "Rebecca Bradley had separated from her husband … They weren’t divorced yet, but their marriage was over and what she did we normally wouldn’t refer to as an extramarital affair. We would call it dating."

He said Bradley’s role in the proceedings has no bearing on her race to retain her seat on the Supreme Court.

"All of us who are lawyers represent friends or family members in a pinch. We should be talking about the issues. We shouldn't be trying to turn good people into bad people," he said.

But Scot Ross, of progressive group One Wisconsin Now, said Bradley "exercised incredibly poor judgment." He said that Bradley shouldn't have become involved in the case because she had out-of-court contact with the child at issue.

Ross said Bradley's record as a lawyer is a legitimate issue in her campaign against Kloppenburg.

Meanwhile, Ross' group was involved in another political firestorm converging on the Bradley campaign after they dug up newspaper writings that Bradley wrote while she was in college. Ross rejected conservatives’ claims that the effort is simply a personal attack.

One Wisconsin Now brought to light this week newspaper columns and letters to the editor that Bradley wrote in 1992 as a student at Marquette University.  Among the findings in the Marquette Tribune are references to homosexuals as "queer" and "degenerates," that women play a legitimate role in date rape, and likening abortion to a "holocaust."

Ross said that a former student at Marquette tipped him off about Bradley’s writings.

In a news conference on Monday, Ross called on Bradley to resign from her position on the state Supreme Court.  She refused to do so, but apologized for the writings and in a statement said that she is "embarrassed at the content and tone of what I wrote those many years ago."

While Esenberg condemned Bradley’s writings, he said that in the nine years that he has known her, he’s never seen a "hint" of anti-gay attitude from her, noted that she’s still supported by a prominent gay businessman in Milwaukee and that she’s approved adoption petitions from gay and lesbian couples in children’s court.

He urged Ross to end the "smear tactics" and "gotcha politics" and focus on matters of substance in the Supreme Court race.  Ross countered by saying that’s what he’s doing.

"Every single thing that has been raised in Rebecca Bradley’s writings -- whether it’s the rights of LGBT people, whether it’s about people accessing contraception and the right to choose and women having decisions over their lives, the fact that she wrote about the legitimacy of women having a responsibility in date rape -- these are all issues," Ross said.

Editor's Note: "The Week in Review" can be heard each Friday at 8 a.m. on the Ideas Network of Wisconsin Public Radio.