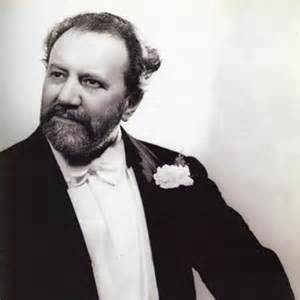 Although London conductor Henry Wood had led orchestras through all kinds of difficulties, he wasn’t quite prepared for an engagement with the Queen’s Hall Orchestra at the Hippodrome in 1909.

Wood first noticed the problem during rehearsal. “I noticed an appalling smell of fish,” he recalled. He wondered where it was coming from, especially since it got worse as the rehearsal went on. At the end of the rehearsal Wood sought out the manager for an explanation.

Wood must have thought he was speaking a foreign language. “The sea-lion?” he repeated. “What sea-lion? Where is it?”

“That accounts for it,” Wood said. “I thought I heard some splashing, but I never knew a sea-lion smelled like that.”

“Oh, he doesn’t smell,” said the cheerful manager. “It’s the fish we feed him. But come downstairs and have a look at him.”

On the way to see him, the manager explained that although some animals had been moved for the concert, the sea-lion had to be left in his tank under the stage.

“Unless we keep feeding him,” he warned, “he will bark and spoil your music.”

“With which knowledge I had to be content,” Wood recalled. He went on to describe the peculiar challenge of the performance:

All through the concert, especially as the hall became warmer, the smell of fish was really beyond a joke. Indeed, I was quite sorry for people who had paid to sit in the front rows. During the soft passages I could hear the sea-lion splashing about in his tank and expected every movement to hear him bark; but he was so busy eating that he kept silence.

It’s quite possible that the sea-lion was, after all, one of the more satisfied members of the audience.