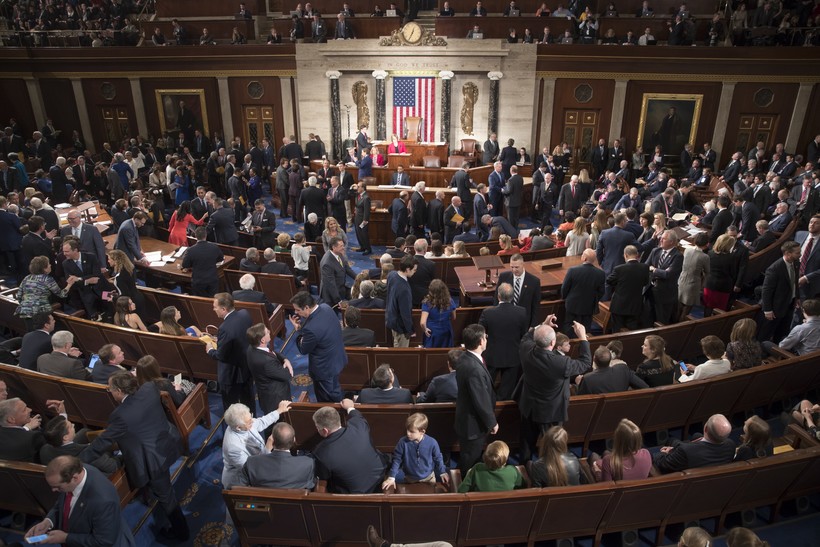 Members of the House of Representatives, some joined by family, gather in the House chamber on Capitol Hill in Washington, Tuesday, Jan. 3, 2017, as the 115th Congress gets under way.  J. Scott Applewhite/AP Photo

Congress Continues To Be More Christian Than General Population

Wisconsin's Delegation Is Slightly Less Religious Than Congress As A Whole
By Courtney Kueppers
Share:

The landscape of religion in America is an ever-changing story. Today, Americans are less likely to identify with a specific religion than ever before in the country’s history.

However, the religious affiliations among members of Congress remain almost entirely static.

According to an annual report published by the Pew Research Center, 91 percent of the members of the 115th Congress are self-identified Christians. That’s a figure that has gone relatively unchanged since the data collection began in the early 1960s.

While Christians in America are over-represented in Congress — with 71 percent of adults in the U.S. identifying as Christian — the religious "nones" are the most largely underrepresented group, said Gregory Smith, associate director of research at Pew Research Center.

Twenty-three percent of the general population say they are unaffiliated with any particular religion, and yet just one federal lawmaker, or 0.2 percent of Congress, says the same.

This "unaffiliated" group accounts for a wide range of beliefs, Smith noted, ranging from people who do not believe in God at all, to people who are unsure or people who see themselves as more "spiritual" than religious.

Smith said generational replacement has been a large contributor to the growth of the religious nones in the general public, so it’s possible Congress may eventually reflect this shift as well. But, Smith said, that's impossible to predict.

"Religious nones are much more numerous among young adults than they are among older people," he said. "And of course we also know that younger adults turn out to vote at lower rates and they may also seek elected office at lower rates.

However, there's also research to prove having religious ties is actually a politically savvy move, Smith said. Pew has found Americans are more comfortable electing candidates who identify as a person of faith.

And while a candidate identifying with specific denominations can make a difference for some voters, Smith said just "believing in something seems to count for a lot."

Wisconsin’s congressional delegation is slightly less religious than Congress as a whole. Eighty percent of Wisconsin's delegation identifies as Christian.

The rest of delegation breaks down as follows:

So, Smith said, the big question a lot of people want answered is: How do these religious ties impact the way members of Congress vote?

The answer is murky at best, he said.

Since Christians constitute the big majority in both the Republican and the Democratic caucuses on Capitol Hill, Smith said it’s "hard to disentangle how much religion might drive the way that people vote as opposed to their partisanship."

There is one member of Congress who identifies as Unitarian Universalist. Then there is Rep. Kyrsten Sinema, a Democrat from Arizona. Sinema is the singular member among the 535 members of Congress who says her religion is "unaffiliated," and while she stands alone in the Capitol, 23 percent of the adults nationwide – the religious "nones" – share that label.