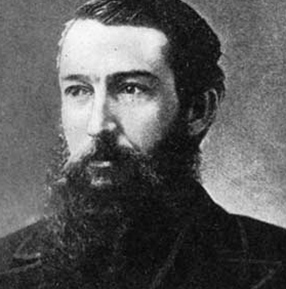 Among those who survived--but never recovered from--the Civil War was a promising young composer and flutist named Sidney Lanier.

Lanier was born in Macon, Georgia, on February 3rd, 1842. As a young man, he was a talented musician and poet, but when the Civil War broke out, he set aside his flute and enlisted as a private in the Confederate army.  For nearly four years he endured the hardships of war, but his harshest experiences began just before the conflict ended, in the autumn of 1864, after he was captured.

During his four months as a prisoner-of-war in the Federal prison at Point Lookout, Maryland, Lanier contracted tuberculosis--consumption as it was then known.  He later recalled that in the years to follow, "pretty much the whole of life had been merely not dying."

He became fascinated by the relationship between poetry and music, and in 1876 he wrote words for a cantata--The Centennial Meditation of Columbia.  With music by the celebrated composer Dudley Buck, a large chorus at the opening of the Centennial Exhibition in Philadelphia performed it. It was well received. But with his words Lanier was experimenting with poetry of a new kind--poetry that broke away from the popular rocking-horse rhythms of the day. And when his words to the cantata were published without the music they were heavily criticized because most readers were unaccustomed to their new, subtler cadences.

Beset by ill health, Lanier spent the winter of 1872 in San Antonio, Texas, where he enjoyed the local German choral societies.  But his financial worries became more pressing than ever, and the next year he moved north again.

He joined the Peabody Orchestra in Baltimore as a flutist, a position he held off and on for the next five years.  To make ends meet, Lanier wrote and lectured on poetry at the Johns Hopkins University.  Along the way he also composed several slender works for flute and small ensemble.

In 1875 he wrote a large poem, "The Symphony," later--much later-- recognized as a remarkable demonstration of his theory of the resemblance between poetry and music.

Sidney Lanier lived to be only 39, having shown much more talent than he could deliver.  His promise had been cut short sixteen years earlier, not on the battlefield, but by a four-month stay in a Federal prison.