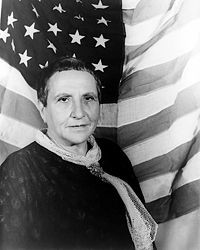 The premise for the opera was unusual to say the least. The libretto by Gertrude Stein consisted of apparently random sentences and phrases that Virgil Thomson had set to distinctively American music.

As the unconventional Four Saints in Three Acts approached its February 8, 1934, debut in Hartford, it began to look like a miracle would be required to get it off the ground.

Since the opera required the illusion of open sky, the set designer had the low ceiling of the stage in the small theater draped in 1500 square feet of looped cellophane. The frustrated lighting designer told her in blunt terms how difficult it was to light, but she refused to listen. She, in turn, had concerns that the skin color of the black performers would clash with her stage and costume colors.

Frustrated by mistakes in the score, hot-tempered conductor Alexander Smallens shouted at Ashton, who stalked out of the theater, but came back as soon as he discovered that the outside temperature was fifteen below zero.

Opening night turned out so well that, two weeks later, the opera went to the 1,400-seat Forty-Fourth Street Theater for a four-week Broadway run.

But just fifty hours before curtain time, a New York City fire marshal put a stop to everything when he cut a strip of the cellophane, lit a match to it, and condemned the set.

A young man from the theater staff suggested coating the entire set and all of the props with a new fire-resistant chemical called water glass. Everything onstage drooped and rich colors paled beneath a thick swath of smelly goo that baked under the bright lights, but the show went on, even as little globs of baked water glass fell to the stage with a sound like falling rain.