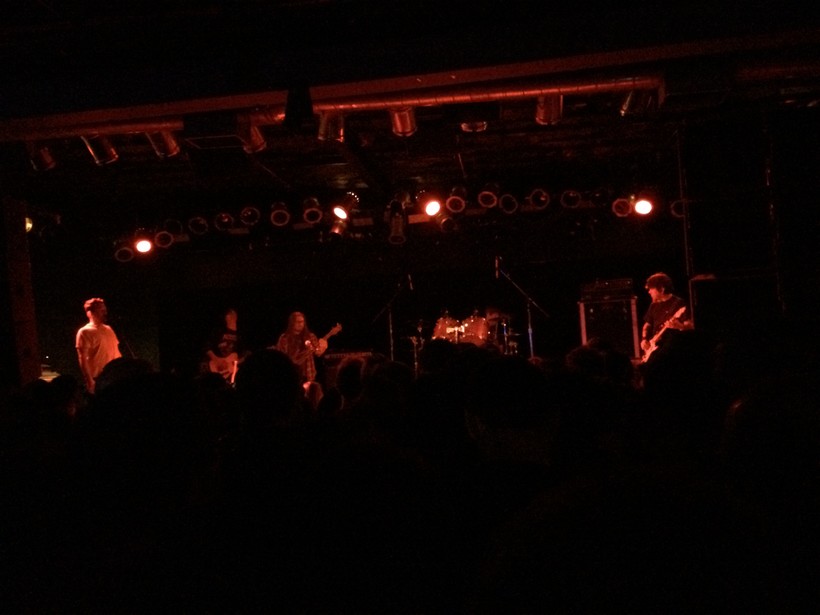 CHICAGO -- The latest concert gimmick of a veteran rock act banding together to perform a classic album in its entirety hasn't yet played itself out among paying crowds, but this novelty works surprisingly well for post-hardcore group Slint.

This is true for a number of reasons. First, the Louisville, Ky.,-born band is temporarily reunited for a brief tour to promote a box-set reissue of their best known work, the 1991 opus, "Spiderland." Second, the combo's discography is already extremely limited. (Only two full-length albums and a handful of singles mean every performance is a greatest-hits showpiece). And third, Slint's set -- as witnessed at a late show at the Bottom Lounge on Chicago's near west side on Saturday night -- was so reverent and mechanical that someone could shut their eyes and imagine it's the '90s again and your listening to a ratty, boombox dub of "Spiderland" with a little filler to stretch out the hour.

And yet, it's still hard not to be impressed by this music and what this band achieved with the "Spiderland" songs given the era's music, their collective ages at the time and how brief the group's run was. Six months before Nirvana's "Nevermind" hit brick-and-mortar store shelves, Slint released "Spiderland" to a mostly muted response. That reception would prove unfounded as the disc earned cult status and its strident, restrained sound and compositional complexity served to nurture musical descendants from the post-hardcore movement, spawning new subgenres like emo, post-rock, slowcore and math rock. And part of the reason many underground-rock fans glommed onto Slint was how clinical and calculating the songs were.  The band members were visionaries, but not the kind who could convey a visionary's passion.

So, any hope that fans would see onstage spectacle on this evening was folly. This show and tour wasn't quite a happy-happy celebration of the "Spiderland" re-release. "Spiderland" isn't an unsung record that's now widely loved like those by Neutral Milk Hotel or My Bloody Valentine. Instead, this was an in-concert restatement of how prescient these guys were more than 20 years ago.

The band's performance Saturday had the perfection of a surgical strike -- and just as much emotional content. Only audience members' momentary headbanging and hoots of acknowledgment when their favorite track began were clues that this music mattered to anyone. The group's aloof presence -- more bashful and independent-minded than snobby -- translated into little charisma and muted excitement. Close a stage curtain in front of these five musicians (the band now consists of three original members and two backup players) and this could have passed for an album listening party two decades late.

That idea might have appealed to the musicians. As performers, Slint seemed oddly detached from the traditional rock concert experience. The performance, such as it was, was extremely low energy. The stage lighting was dim and understated. Singer-guitarist Brian McMahan positioned his mic stand on stage right and he and lead guitarist David Pajo kept edging out of view to hide behind parallel stacks of amplifiers. (Even drummer Britt Walford seemed removed, obscured from view by a pair of tom toms.) Beyond the songs, the band had little to say. McMahan's vocals, which were buried in the album's mix, were all but indiscernible mutterings in this venue.

Their first song, "For Dinner…" was a patient march that eased the slow-moving, foreboding mood into the room. In front of the hushed audience, sideman Matt Jencik's dark bass played lead, grumbling, flexing and then relaxing as Pajo's delicate chord strums rang out in a dry monotone. The explosive snap of Walford hitting his snare drum and clipped fills were the only clues that this wasn't a cover of a song by Duluth, Minn., band Low. What were the twin messages of this initial exercise? Building tension is a virtue and minimalism can be more.

One of the more accessible tracks on "Spiderland," "Breadcrumb Trail" came next and gave the first sparks of recognition rippling through the small club. As McMahan's spoken lyrics gave way to gravely singing, he twitched and contorted his body in front of the microphone like dad-rock soulman Joe Cocker. Pajo, meanwhile, unleashed serrated power chords and sonic squeals that gave the song both a menace and the illusion of depth and texture beyond just riffs to head bang to.

This union of dark and light shadings was explored further on latter-day release, "Glenn," which was less propulsive than the recorded version, but demonstrated the breadth of Pajo's instrumental toolkit. As the rhythm consistently climbed higher, Pajo deliberately changed his method of attack. He began like an animal whisperer luring listeners in with relaxed, arpeggio notes before shifting to a thrash-like riff that made his guitar sound like a cackle. At one point, he turned his back to the crowd and conjured a bright swell of feedback from his amps that he manipulated -- sometimes sounding like a viola, other times like a Sonic Youth tangent.

Things only got more complicated with odder songs like "Nosferatu Man" and "Ron," which revealed a previously undetectable kinship to Primus' quirky funk. Both songs have something of a split personality. "Nosferatu Man" mostly consists of a creeping, stilted guitar-bass interplay before the guitars growl to life and McMahan hoarsely howls during the chorus (a la the Pixies or Nirvana). In the case of "Ron," the first portion is a false harmonics intro only a metal god-in-training like Pajo could pull off. The second is the sloppy verse part, which makes what could be the theme music for a strutting street walker. At its culmination, McMahan hollered the words like he was doing his best Henry Rollins impersonation as Pajo offered up a Frank Zappa-esque squiggly solo.

Mimicry (even self-mimicry) aside, it was the highlights of "Spiderland" that were the most impressive recreations. As on record, "Washer" was a circular cascade of guitar and bass notes that strayed from their original pattern for a brooding, sometimes visceral digression before revisiting the core concept. For the bluesy dirge "Don, Aman," Walford climbed from behind the drumkit, sat on a chair at the lip of the stage and strummed a guitar across from Pajo. As Walford grumbled the oblique lyrics, the pair played dissonant, interlocking guitar refrains that wound up the tension before Pajo's distorted guitar surged into the foreground.

Pajo wasn't always so brazen. As the players readied themselves to close with Slint's best-known cut, "Good Morning, Captain," Pajo wandered offstage. Just when many might have wondering what was happening, he began to play the song's intro, plinking notes on his guitar until it snaked around Jencik's elastic basslines and Walford's odd syncopations. To describe it, imagine a speed-down Captain Beefheart melody cleared of all chaotic eccentricities. As McMahan intoned more garbled wisdom into the mic, the two guitars drove the performance, bouncing off each other in repetitive licks that made this a convincing epic, musical treatise than a hardcore thrashfest with arty pretensions.

After a brief moment offstage, the group's encore of "Pam" and "Rhonda" were a one-two punch of loud distortion rock. Both offered hints of aggressive guitar crunch that Slint so often resisted, but could have elaborated on had the group stuck together. As the audience cheered on this reunion, the band members gave quick waves and scampered off.

In terms of perfectly reviving "Spiderland," Slint came admirably close to the mark. All those years in other bands (Zwan wasn't too bad after all, was it?) haven't diminished the musicians' skills. But, they've had some practice with this material. While the group broke up shortly after recording the album in 1990, they have reunited for abbreviated series of shows in the last few years, ostensibly playing these same songs.

But, in all of that time, Slint has never found a way to really perform this material with anything approaching excitement. While instrumental bombast and onstage pyro would be completely out of character, Slint gave fans precious little reason not to skip the hassles of a clu and listen to their music on their headphones. After all, that is really where this music sounds at its best. (One suspects the band members would agree.)

As such, the audience might not have needed to be there at all. Maybe the guys in the band would prefer it that way.