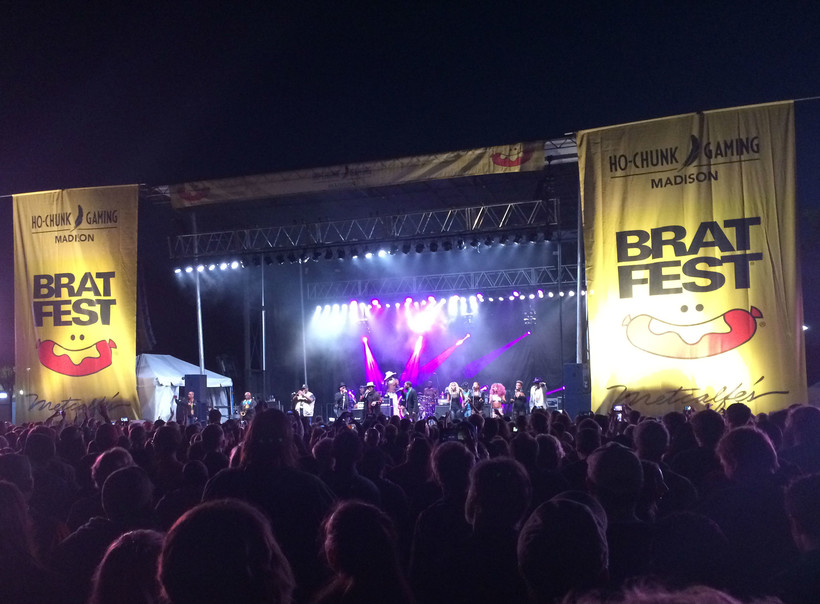 While history can recognize some of the injustices committed in the past, this can mean little for those living in the present.

Musical innovators, for one, are often hailed and cited by their sonic descendants, but that recognition doesn't have monetary value attached, nor does it mean some kind of karmic justice will ultimately prevail. Even trailblazers can find themselves sinking to touring the country fair circuit.

And so, here we are at Brat Fest, Madison's annual four-day celebration of Wisconsin's other culinary staple (cheese, perhaps you'll get your own celebration one day.) And the marquee talent for Friday's opening shindig is George Clinton and the latest recruits in his Parliament-Funkadelic troupe to offer a truly conflicting, confusing performance that somehow could still delight chiefly because everyone knows and cherishes their history. Modern pop music as we know it wouldn't exist without them.

Given Clinton's historical importance and his band's pervasive influence in too many forms of pop music, this is an act who you might forgive for many sins. The audience who waltzed in for their fill of brats and beer saw a joyful, hour-and-a-half mélange of rock, R&B, soul and of course, funk that Clinton and company pioneered in the 1960s and '70s. Bad luck, poor business decisions, substance abuse and the like meant many in the P-Funk circle didn't benefit from their ingenuity. And while Parliament-Funkadelic can still usher in the necessary party mood with their heady brew, still make fans laugh with their impish humor and offer flashes of the musicians' virtuosity, this was a show where the audience could see this legacy unraveling before your eyes and ears.

That history was embodied by Clinton himself. More a carnival barker and old-fashioned impresario than a lead vocalist, Clinton puttered around the stage without purpose, engaging the instrumentalists or trying to amp up the mostly sedate crowd, with occasional moments of rest in a small chair in front of the bass drum. Throughout, Clinton was guiding the flow, introducing new performers and cueing the musical changes -- from slow jams to rap numbers to classics of the P-Funk songbook. Gone are the multicolor hair extensions and wild costumes from the '70s and '80s or the mix-matched zoot suits that he has embraced in recent years. He was dressed on this night in a crushed tan fedora, oversized glasses, silky, crimson pajamas and a black Orson Welles cloak. Despite the changes, Clinton is still the mischievous host of this soiree, hollering into the mic when the mood strikes him, joining in his backup singers' rehearsed dance moves and even dabbing as this musical variety show moves on about him.

This version of P-Funk can be tight and show moments of technical precision, but their performance is still a shambles by Motown standards. The set was relaxed and the pacing emphasized not harshing any mellows to the detriment of clean execution. The group was much less a funkateering orchestra than the very loosest of ensembles, with musicians and singers wandering on and off the stage. Chaos reigned as two (sometimes three) guitar players, longtime bassist Lige Curry, a drummer, two-man horn section, a couple of rappers and a full house of ambling background singers moved the music between blended genres. The enduring presence of heavyweights like guitarist Garrett Shider and sax player Gregory Thomas gave a spirit of continuity to the band. And the return of guitarist Blackbyrd McKnight and backing vocalist Gary "Mudbone" Cooper after time off the road meant Clinton had a deep bench of leaders to whip this new generation of sidemen into shape and impress the crowd.

Impressing and pleasing the fans were fleeting moments that the group consistently strove for in this swirling mix of sounds and evolving moods. At its core, P-Funk is a party band and if this group was giving a subtle history lesson, this would be an entirely festive experience. First, they had to pull these audience members them out of their world of grownup obligations. That first tool was the high-energy rocker "Super Stupid," which was drilled into the crowd and swept them into Clinton's own weird Oz of funky grooves and cartoonish mythology. Cooper's powerhouse vocal delivery and the rhythm section's hard-hitting musical churn created a Hendrix-like maelstrom that proved we weren't in Wisconsin anymore. At that, Clinton was delighted, smiling and mugging at what they achieved.

After that, P-Funk classics continued to roll through the set, sometimes hitting the mark or sometimes breezing through the familiar touch points and even losing the musical plot all together. As the group jammed and each musician got time in the spotlight, something familiar was often needed. "One Nation Under The Groove," the official anthem for Clinton's wacky universe, gave the onlookers a familiar refrain to begin to move to as they pondered what else they were in for.

"Nation" segued into the pulsing "Flash Light," which brought dancer Carlos McMurray pimped out as P-Funk character Sir Nose d'Voidoffunk. With a prop elongated nose, long-brimmed white hat and a furry white coat and pants, McMurray showed off his hard body, a few gymnastic moves and then busied himself for the rest of the concert with taking selfies or shooting photos of the crowd with his iPad. Behind this, careful listeners might have marveled at Shider's Nile Rodgers-ish guitar chops that dressed the rhythm although there were too many distractions in this three-ring circus to focus on the tunes.

Occasionally, the music was distractingly erratic as well. "Give Up The Funk (Tear The Roof Off The Sucker)" was a clumsy mess of clashing sounds. The trumpet-sax horn section, spacy keyboard lines and Curry's nimble bass were sharp pivots for the music, but this was often buried in too many hoarse voices warbling, moaning and muttering to distract from this celebration. As the musicians stretched the song past the 5-minute point and the vocalists began to hang back, the stronger players could reassert control or disguise the bum notes. The chants that dominate the song's transition points reminded this onstage bunch where they were and where they needed to go.

There wasn't always times when things were salvageable. There were plenty of instances when the performances just didn't gel. Newer songs like "Dirty Queen" was a bull-charging mess that came across like a rant. (No wonder Clinton made himself scarce.) The hip-hop centric ditties, including one disjointed rap-metal basher, showed how much Clinton owed to his original collaborators who helped him conceive many of P-Funk's most-beloved material.

To that end, the show's most perplexing moment was their prolonged rendition of "Maggot Brain." The instrumental was originally a six-stringed showpiece for original Funkadelic guitarist Eddie Hazel, who died in the early '90s. The song's power came in the intensity and dazzling emotionality of Hazel's playing, serving as a bridge between the passing Jimi Hendrix and the next generation of axe slingers. Although other guitarists took on "Maggot Brain" as Hazel came and went from the band over the years, the song is inextricably linked to Hazel. With McKnight taking center stage now, his performance showed some of the same technical prowess that Hazel could command but sadly without the searing soulfulness that Hazel could command. What McKnight could offer was plenty of guitar pyrotechnics -- a groaning guitar tone, blinding fretboard runs, Steve Vai-esque tapping and even playing with his teeth. Listeners could see glimpses of the old magic, but sadly eroded the line that divides a musician bearing one's soul and just showing off.

This also came up in the version of songs or brief interludes that underlined just how important Clinton's music is to the DNA of hip-hop. In all-too-familiar pattern, the samples that DJs pulled from P-Funk records often became better known than the original composition. The group's version of "(Not Just) Knee Deep" might have received many nods of recognition because it was sampled for De La Soul's '80s hit, "Me, Myself And I." Set closer "Atomic Dog" was the basis for Snoop Dogg's breakthrough solo smash in the mid-'90s.

"Atomic Dog" saw this unit finally pull all the elements -- musical or otherwise -- all together. Everyone seemed on the same page, Clinton dancing in sync with the half-dozen background singers. While Clinton was shouting into the mic, the band and singers locked into a deep groove that wouldn't quit. McMurray and others leapt into action and began bringing women and girls from the audience to dance on the stage with them. As this mass of people grinded and swayed to the funk, the audience could finally see a glimpse of the freeing spirit that Parliament-Funkadelic's music exemplified come into being. One last weird thing: As the group was still building up for the outro, Clinton just slowly crept off stage one minute before the song finally concluded. It was an anticlimactic finale.

Flaws aside, those who made this trip to Willow Island near the Alliant Energy Center for the first night should consider themselves lucky. On subsequent nights of the Memorial Day weekend festival, the lineups appear to get dice-ier, with '90s one-hit wonders Everclear and some members of '80s metal band Queensryche topping the bill.

And although there was much left to be desired with this inconsistent performance -- especially considering P-Funk's rep for wild, transcendent musical experiences -- Clinton and company still had the back catalogue and the musical firepower to provide the kind of easygoing, happy atmosphere any good time needs. What more can one ask at a cookout serving brats and beers?