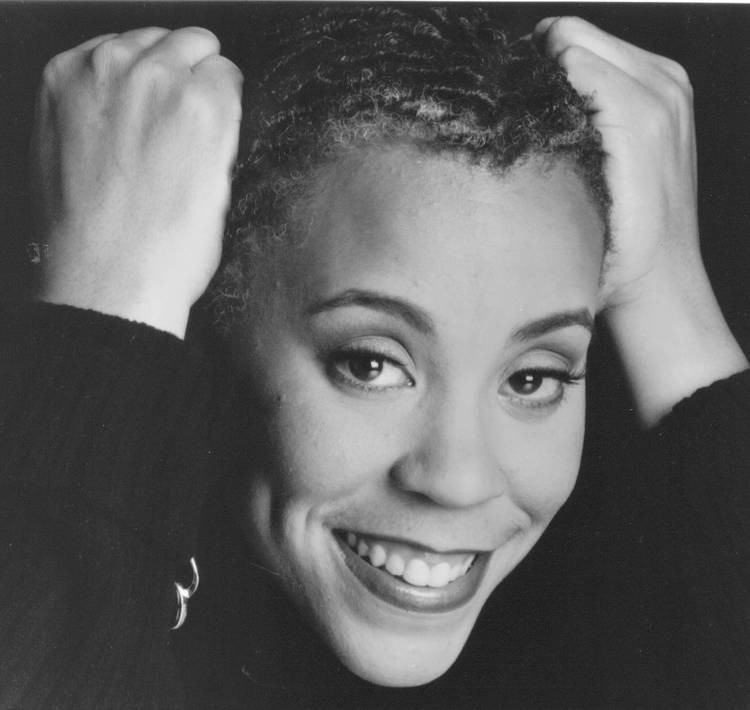 Singer, storyteller and cultural artist Maggie Brown brings her sound and vision to Madison, Wisconsin's Cafe Coda Saturday, March 23, 2019 at 8:00 pm.  Brown is “a vocalist, music producer, storyteller, and a concerned cultural artist intentionally seeking to influence my audience using the transformative and unifying power of words and music", with the "intention to inspire a greater sense of responsibility for the positive outcome of our future.”

Her late father, Oscar Brown, Jr. was a singer, songwriter, playwright and cultural Griot (the Afrocentric term for a keeper of history, stories, musician, curator of lineage and more) especially visible in the 1960's and early 70's.

More about Maggie Brown and Her Oscar Brown, Jr. Archive Project:
Maggie embodies a powerful and passionate performance whether she is presenting alone, acapella, or fronting her own trio, or with Orbert Davis’ full 60 piece Chicago Jazz Philharmonic Orchestra.  Brown has recorded with Abbey Lincoln, Jonathan Butler, Ramsey Lewis, Stevie Wonder and her legendary father Oscar Brown, Jr.  In 1995 Maggie launched her own independent label MagPie Records releasing her first solo project FROM MY WINDOW. The CD was nominated for a Chicago Music Award for Best Jazz CD.  Before his passing, Maggie produced a live concert recording with her father entitled: WE’RE LIVE.  The CD was recently re-released internationally on ESP Disk and is available on iTunes.

As a little girl, Maggie absorbed the creative atmosphere of the Avant garde and free music scene. Being the younger sister of bassist, Oscar Brown, III, she regularly witnessed her brother rehearsing and performing with AACM co-founder Brother Phil Cohran and with the Sun Ra Orchestra.  In the 1990’s Maggie began spreading her wings, comfortably hanging in free music circles performing with creative ensembles including: Samana, One Family Band, and The Funky Wordsmyths.  Maggie has worked in more recent times recording with Kelan Phil Cohran and was featured in his Rainbow Ensemble at the 2008 tribute to Sun Ra in Millenium Park; This past summer Brown was a featured vocalist in Doug Ewarts’ Inventions Ensemble as part of the AACM’s 50th Anniversary series of celebrations  at Chicago Jazz Festival and the MCA. She has appeared now on several occasions with Dwight Tribel. Most recently this past November at the Moss Theatre in Santa Monica, CA

In her hometown Chicago, Maggie Brown is called on to bring authenticity and integrity to whatever the job calls for.  Though her upbringing is rooted in jazz, Maggie is comfortable singing various genres including blues, gospel, pop and even spoken word- with impressive conviction and flow.   It is hard to put Miss Maggie in a single category or genre. It is however, easy to see that this seasoned artist is a true entertainer, not just another singer. Chicago Tribune’s Howard Reich says of Maggie’s performance, “she is one of the most fiercely committed artists in Chicago”

“Our Dad was the Grand Pap of Rap:”

The TWO BROWN SISTERS discuss their mission to preserve the work and advance the mission of Oscar Brown, Jr.

Acclaimed Chicago vocal performer Maggie Brown, and her sister, singer, actress, musician, Africa Brown, are currently working on campus as Artists in Residence, co-directing the Oscar Brown, Jr. Archive Project at the Reva & David Logan Center for the Arts.  Oscar Brown, Jr. (OBJ), best known for his classic recordings, “Sin and Soul,” and “We Insist! Freedom Now Suite,” with Max Roach and Abbey Lincoln in 1960, was also a jazz lyricist [“All Blues,” “Afro-Blue,” “Work Song”], and playwright—with musical productions from the south side of Chicago [“Opportunity, Please Knock,” produced with the Blackstone Rangers, 1967; to McCormick Place, with the pioneering “Kicks and Company,” 1961; and Off Broadway with Muhammed Ali starring in the title role “Buck White,”    But few people know that he authored over a thousand poems, wrote numerous essays, and “discovered” the Jackson 5 and Avery Brooks at a Gary, Indiana Talent Show in 1968.

Born October 10, 1926, Brown grew up absorbing the sights and sounds of his Southside, Bronzeville community.  He became a pioneer in the entertainment industry by writing and performing songs, poems, and plays that celebrated African-American life and the fight for social justice when the civil rights movement was unfolding in the ‘60s. He enjoyed entertaining and educating his listeners, and coined the word “edutainment” to describe his approach and style. He combined various musical genres, such as  jazz, blues, folk and gospel, to fashion a message of justice. Although hip is certainly characteristic of his artistic delivery and personal swagger,  Brown saw being h.i.p. to mean improving our Human Improvement Potential

Although Oscar Brown, Jr. went on to impact not only the jazz music world, the theater community, and the Black Arts Movement, he became one of the chief practitioners of delivering poetry, or spoken word, over jazz in the late 1950’s, and a pioneer of cultural arts-in-the-schools based on those models in Chicago. The edutainment blueprint that he designed to transform despair into hope and promise by developing the natural talents of his people, has been tragically underutilized in the face of the endemic violence, flowing from within and without underserved black communities. Greatly respected by such contemporary notables as Lorraine Hansberry and Gwendolyn Brooks, OBJ may possibly be one of the most neglected Chicago writers of his era.

Fortuitously, last fall, on OBJ’s birthday, October 10, his daughter, Maggie Brown attended the Annual Logan Center’s Founder’s Day celebration, where she met Dan Logan, whose family is the namesake and benefactor of the Center. Maggie learned that Dan was not only a fan of Oscar’s work, but he recalled interviewing him during his journalist days. She began a conversation that eventually led to the launch of the OBJ Archive Project and the naming of Maggie and her sister, Africa Brown, (the two youngest of Oscar’s seven offspring), as project managers and Artists in Residence. The Project’s Purpose is to assemble, preserve, document, interpret, disseminate, and perform the various works created by the prolific and multi-talented singer, songwriter, composer, author, playwright, poet, essayist, and thinker; to expand access to his creative works by establishing an Archival Collection for research and scholarly endeavors; and to produce some of his lesser known works and compositions for exposure to wider and younger audiences.