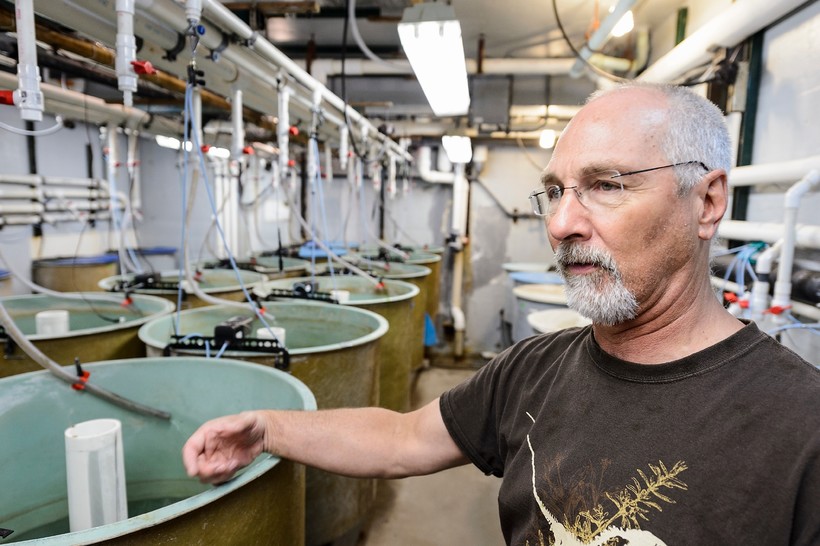 Terence Barry, senior scientist in animal science, shows one of many tanks of fish being studied at the Water Science and Engineering Laboratory.

Compound From Chickens Being Used To Improve Growth, Survival At Fish Farms

Researchers at the University of Wisconsin-Madison are using oil that comes from a gland on chickens' tails to improve survival at fish farms. The discovery could have global implications for the Atlantic salmon industry.

While studying potential uses from parts of chickens that are usually discarded by processors UW-Madison animal science professor Mark Cook learned that a chicken's preen gland, located on the topside of the base of the tale, excreted an oil that exhibited anti-inflamatory properties.

In past research Cook learned that another anti-inflamatory compound boosted fish growth. So he contacted UW-Madison Senior Scientist Terence Barry, an expert in aquaculture.

Barry said the two of them and a post-doctoral candidate named Jake Olson did a simple test using fathead minnows and noticed the accelerated growth. They hypothesized that the oil, with it's anti-inflamatory properties, allowed fish to focus energy that is naturally expended fighting off infections and parasites in their gut into development.

"So, by eliminating that or reducing it, that energy that would normally go to fighting something you don’t really have, goes to growth," Barry said.

But further tests using perch and rainbow trout didn't yeild similar results and the men were puzzled. But Barry said an accident at the lab resulted in another discovery, fish seemed to have better survival when consuming the oil. By chance there was a temperature swing in one of the tanks containing two groups of fish, those who were treated with preen oil and those who were not.

"During the experiment all the fish getting the oil survived and many or most of the fish on the control treatments died and that happened with different stressors in different experiments," Barry said.

So, in a strange twist of fate the oil from a gland in a chicken's tail helps fish being farmed grow faster and have better chances of survival in stressful situations.

Barry and his fellow researchers are calling the oil cosajaba, which has been patented. He said it could have global implications for the multi-billion Atlantic salmon industry, which loses hundreds of millions of dollars worth of fish during stressful moments like when they're moved between tanks, vaccination and the transition from fresh to saltwater.

Barry said the fish calming cosajaba could also be used to domesticate wild fish like walleye, thereby allowing them to be farmed.