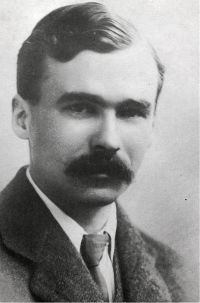 Composer in the Trenches

George Butterworth had enjoyed significant success as a composer, but he found a cause that led him to abandon music. He enlisted as a soldier in World War I.

Like many composers, Butterworth was originally headed for a career in law.  But he inherited a love for music from his mother, who was a singer.  He learned to play the organ at school in Yorkshire and studied piano at Eton, where he began to show considerable talent as a musician. He wrote a barcarolle that was performed by the Eton orchestra in 1903, when he was eighteen.

The next year he went on to Trinity College, Oxford, where music took up more and more of his time, particularly after he met composer Ralph Vaughan Williams.  Butterworth left Oxford after less than a year and became involved with the English Folk Dance and Song Society.  He went with Vaughan Williams on many expeditions into the countryside to gather folk tunes.  He collected Morris dances from Oxfordshire and folksongs in Sussex.

The collaboration between the two went further.  Butterworth suggested the idea for what became Vaughan Williams' great London Symphony. When the score was lost, he helped reconstruct it and wrote the program notes for the first performance.

He undertook projects of his own.  Between 1911 and 1914 he wrote several significant works, including The Banks of Green willow, Six Songs from "A Shropshire lad," and Cherry Tree, an orchestral prelude.

Despite all the activity, though, Butterworth found himself increasingly restless and haunted by a feeling of purposelessness.  In 1914, when war broke out, he thought that he had at last found a cause.  He enlisted in the Duke of Cornwell's Light Infantry, destroyed all of his manuscripts that he deemed unworthy, and went to the front.

During the Battle of Pozieres in 1916, George Butterworth died defending a trench.  He was awarded posthumously a medal and the dedication of the work he had helped to save, A London Symphony.