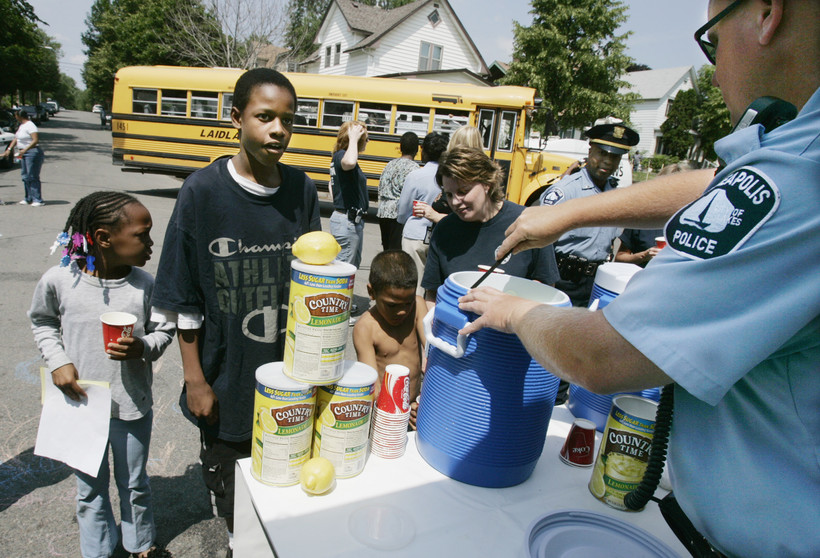 Minneapolis police officer Kurt Indehar, right, mixes lemonade for children in north Minneapolis, Thursday, June 29, 2006. Police set up the lemonade stand and a basketball hoop as they work to protect at risk areas of the city and establish a connection with citizens in hopes of deterring crime. Jim Mone/AP Photo

Community Policing, With Racine As A Model

More than 20 years ago, the city of Racine was in conflict. Crime was rapidly increasing in the city’s neighborhoods.

When put in the same situation, many cities flood "problem" neighborhoods with more police officers.

The Racine Police Department here took a different approach: They moved in. The police department purchased and rehabbed old homes into Community Oriented Policing, or "COP," houses, which serve as literal hubs in their communities.

State Sen. Lena Taylor, D-Milwaukee, said she believes Milwaukee could take a cue from Racine’s success. The houses are part of a set of bills Taylor plans to roll out during the current session.

"Imagine a police office, a hub for city inspectors, a place for probation agents to meet with individuals, a place where neighborhood associations have their meetings, a place where the community gardens," Taylor said. "It is really a collaborative effort ... It could be anything that a community defines it to be for them."

Racine saw success with the model. Crime "has been reduced up to 70 percent" in some cases, according to the city.

Taylor is enthusiastic about the idea. She said it brings together many of the pillars of community policing she said are so important, and often missed.

"What I want to do is help us build that trust, and help communities learn to be partners in public safety," Taylor said.

Part of that, she said is building relationships. She said she believes it’s crucial for officers to live in the communities for which they serve.

But the more lenient law is still under scrutiny.

Taylor said the entire community power structure is benefited when officers are embedded in communities they serve. She doesn’t agree with arguments that contend that kind of requirement would limit applicants or the freedom of law enforcement.

"It really is not about saying where you can’t live," Taylor said. "It’s saying that if you want the job, then you need to do these things because it will help you to do the job more effectively. And candidly, keep a community safer and keep you safer."

Taylor doesn’t know if her ideas will garner bipartisan support.

But talking about it is the first step.

"I truly will be working on it," she said. "I hope that we will at the very least have the dialogue."