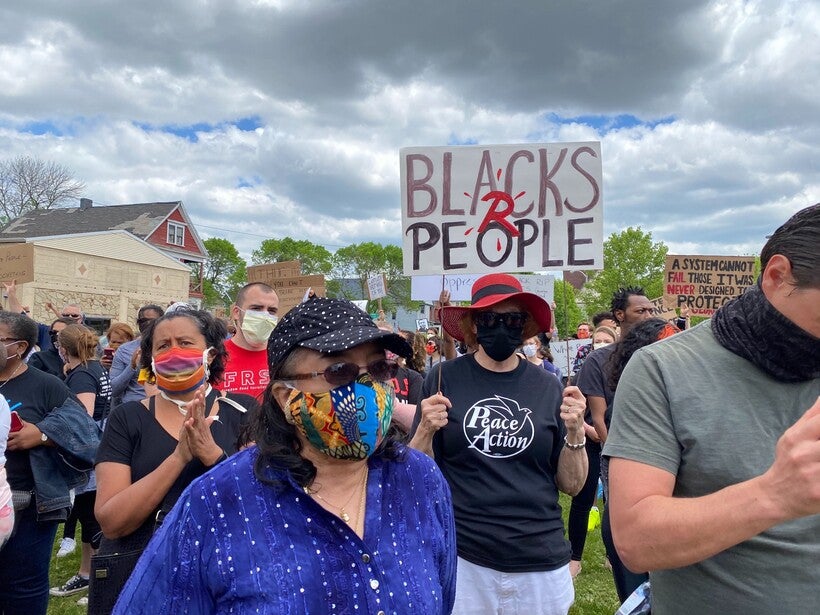 Leaders Say They Are Hopeful Change Can Occur
By Corrinne Hess
Share:

More than 140 cities across the nation saw a weekend of protests over the killing of George Floyd and centuries of the systemic racism felt by communities of color.

Milwaukee’s black community leaders are outlining the changes they think it will take to address the concerns of protesters turning out in Milwaukee and across the country.

In a letter sent to Gov. Tony Evers, Milwaukee County Executive David Crowley, and Milwaukee Mayor Tom Barrett, Leaders Igniting Transformation, a nonprofit led by youth of color, asks for more investment in neighborhoods of color and the removal of racist police officers.

"Our lives are not valued," said Gibson, who lives in Milwaukee. "The same institution that is here to protect us sees us as a threat."

Demonstrations in Milwaukee and Madison started peacefully during the day, but the nights have ended with looting and property damage. The National Guard was called to assist in both cities.

Gibson said protesters felt the decision to call the National Guard was a slap in the face because black people are dying daily and disproportionately at the hands of police, from COVID-19, from lead poisoning and from chronic poverty.

"The reaction to daily death and dying of our people is met with constant occupation and policing," Gibson said. "These chaotic actions or what have you are a response to traumatic things happening across the country. I hate to see my city burn. I hate to see businesses being broken into, the looting and the destruction of property. Everything I just named can be bought again. There is no bringing back another man’s life."

The nonprofit is asking the governor and Milwaukee officials to:

Gibson said Evers’ office acknowledged the letter the nonprofit sent, but he doesn’t expect to hear anything else. He has not heard anything from Milwaukee officials.

Floyd, a black man, died after Minneapolis officer, Derek Chauvin, allegedly knelt on his neck for about nine minutes while Floyd repeatedly told Chauvin he couldn't breathe. On Friday, Chauvin, who is white, was charged with third-degree murder and second-degree manslaughter.

In Milwaukee, protesters are also demanding justice for Milwaukee resident Joel Acevedo, who died from injuries allegedly sustained in a fight with an off-duty Milwaukee police officer.

Milwaukee community leaders began a "You Matter" campaign last week related to the COVID-19 pandemic. They said Sunday this message transcends the virus.

"The unrelenting pressure from structural and systemic racism is more than any person can be expected to endure," a letter signed from about 125 community leaders said. "Heinous and ongoing violence committed against our fathers and mothers, sons and daughters in the form of inadequate access to decent education, healthcare, work, and housing conflicts with our fundamental sense of humanity." 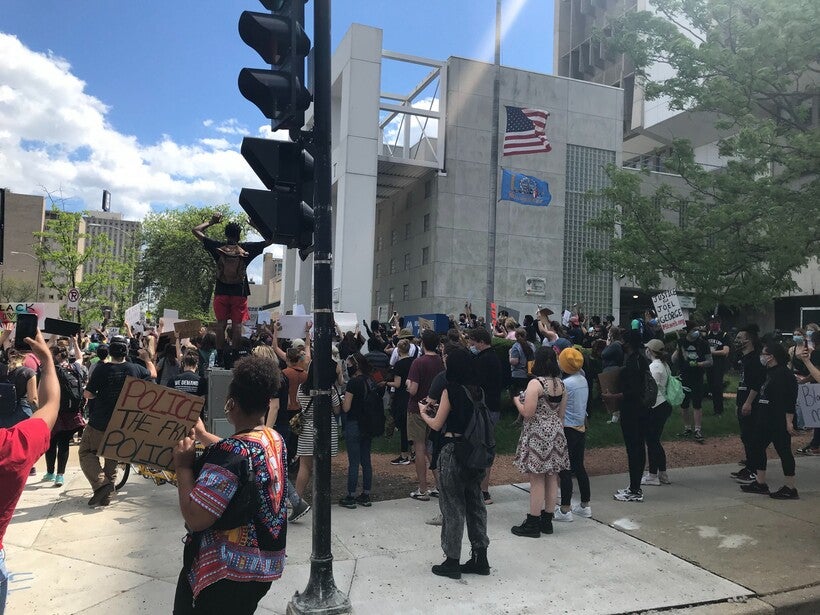 At least 200 protesters marched through downtown Milwaukee before stopping outside the Milwaukee Police Administration building in the 700 block of West State Street on Saturday, May 30, 2020, as officers in riot gear stood by. Madeline Fox/WPR

Eve Hall, president and CEO of Milwaukee Urban League, said Floyd’s death pushed people who have been social distancing or staying home because of the coronavirus over the edge — especially since this is not the first death of an unarmed black individual.

Hall said the looting and destruction that has taken place in Milwaukee and elsewhere is unfortunate, but people should not lose focus about the reason why it has happened.

"Unfortunately, this is the way it has gotten true attention across the country, but we don’t want to see a destructive community, we want a productive community," Hall said.

Hall said she is encouraged to see so many of the protesters are of different races, gender, ages and backgrounds.

"Just that alone says that we are approaching a new era of conversation between so many different people who appear to be unified in terms of just simple justice and fairness of how anyone is treated," Hall said. "That is what brings me hope, and optimistic, even in the midst of what is so hurtful and painful and destructive."

Milwaukee Common Council President Cavalier Johnson is calling for reforms to hold the Fire and Police Commission and the Milwaukee Police Department more accountable. Johnson said the video of Floyd brings to mind Milwaukee's own names of black men who have died at the hands of police.

"I can’t say what was in everyone’s mind or heart who marched and drove through so many neighborhoods this past weekend, but I know that the organized portions — which lasted until past dark — were peaceful, heartbroken, and righteous," Johnson said in a statement. "Those of us who represent this city need to heed their call to action as they utilize their First Amendment rights enshrined in the constitution. I encourage our citizens to utilize these rights to speak out against injustices — especially systemic injustices that consistently result in the loss of life for black and brown people."