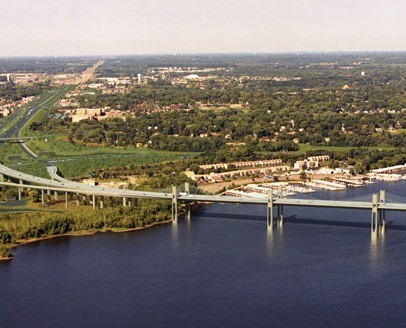 Some communities in far western Wisconsin are planning for growth now that a new bridge across the St. Croix River is in the works.

The new bridge will be called the St. Croix River Crossing. It will replace an 80 year old lift bridge and will link Stillwater, Minnesota to Houlton, Wisconsin.  Construction will begin in 2013 but municipalities like the city of New Richmond have already begun preparing for what could be a population and a business boom. Jim Zajkowski sits on the city council plan commission. He says last year, they began waiving fees like sewer access charges for new developments, “We call this the New Richmond Land Rush and we wanted to spur the activity. We wanted to be the first ones on the block to do this.”

Zajkowski says city officials are eager for the new four lane freeway to the Twin Cities to open, “We’re ready for this. Right now, around the city, we’ve got about 700 to 800 buildable lots right now and that means with utilities up to the lots.”

Jay Fletch is a real estate developer with Edina Realty in Woodbury, Minnesota.  He says the lots in New Richmond were built prior to the housing crash in 2008.  But he doesn’t expect them to be vacant much longer, “And the bridge, actually when we start seeing some dirt moving you’ll start to see some people say, ‘You know what? I can take that bridge, I can add that nine, ten minutes and get back over to Wisconsin and get a little more house, get a little bit more land.’ which in turn will help the stuff already built.”

The St. Croix River Crossing project is expected to be completed in 2016. Its cost estimates range as high as $676 million.