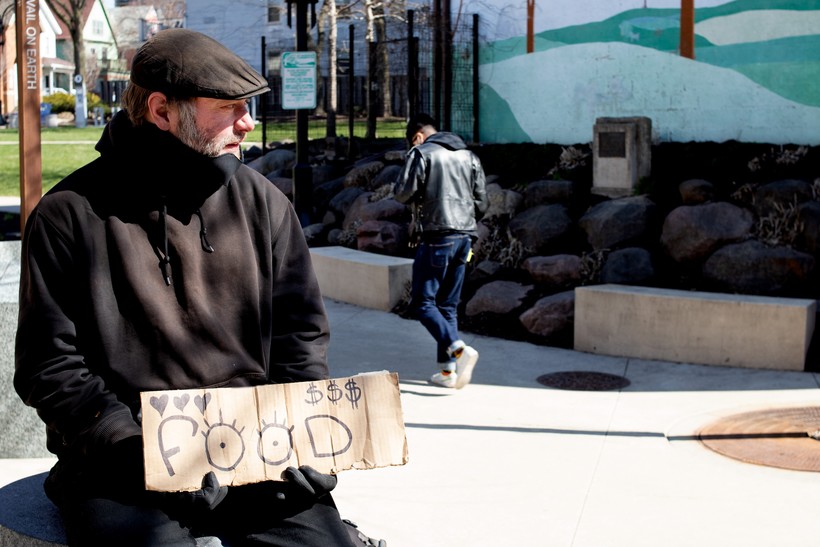 A Comforting End: Nonprofit Aims To Create A Hospice House For Those Experiencing Homelessness

"My parents asked me to leave the house because I was 18," he said. "So, I got on the bus and came to Downtown Madison and learned from other people about how to survive being homeless."

Now 52 years old, he’s been living on the streets ever since.

While many of his days and nights are difficult — like when he can’t find enough to eat or has to sleep outside during winter — Thomas says he’s made lasting connections with others who are homeless.

"I have a lot of good street family out here that love me more than my own family does," he said while panhandling in front of a Walgreens across from the State Capitol.

But over the years, a number of his friends have simply disappeared. In some cases, he’s learned that those friends have passed away.

A new group in Madison, however, is reaching out to help this forgotten population during the most vulnerable, final moments of their lives.

Called Solace Friends, the organization is creating a hospice home for the homeless community.

"It’s a nonprofit aiming to create a home for people who have nowhere else to go when they need a place to get care while they're dying," said Dr. Ann Catlett, a palliative care doctor with UW Health and one of the founders of Solace Friends. "The idea is to target people who just fall through the cracks or don’t have any other options."

Catlett adds that the group’s goal is to make sure that those experiencing homelessness can die in a dignified, warm place and are surrounded by love.

"I think the main thrust of our group is to create a culture of what I call 'exquisite kindness' and welcome for people who maybe haven’t been welcomed other places," she said.

A 67-year-old man named Chase Davis, who had been homeless for eight years before finding housing last January, said the service that Solace Friends will offer is badly needed and that homelessness often leads to poor health. 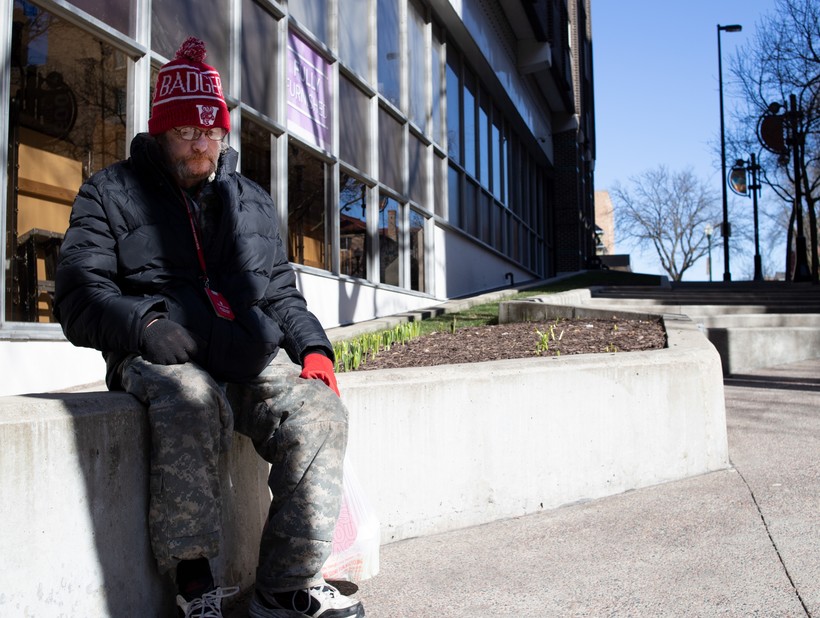 Chase Davis, a 67-year-old man who had been living on the streets for eight years prior to this January, says he's known a number of friends who have died while experiencing homelessness. Steven Potter/WPR

"I’ve lost a lot of friends along the way," he said. "(It’s) their health problems — being on the street, not eating good, not going to the doctor."

For those who are sick or elderly, being homeless only amplifies problems, adds Catlett.

Catlett pointed to a 2018 study done in Boston that found that people experiencing homelessness die, on average, at far younger ages than others.

"In that study, the average age of death for people who were unsheltered was in the range of 47-53. And, if they are unsheltered, their mortality rate was 10 times (the rate of) their matched age cohorts," she said. "The morbidity of being a homeless person is high."

Exactly how many people who are homeless die each year in the Madison area is unknown.

"We don’t have a great way in this community of keeping track of where people who are experiencing homelessness are dying," said Catlett. "So, nobody really knows. ... I think last year, it was eight or nine people (and) other years, it’s been over 20."

Based on counts done at shelters and through outreach providers, City of Madison officials estimate there are almost 900 people in Dane County currently experiencing homelessness. They also estimate that around 12 people in the county's homeless community die each year.

News and police reports show that homeless individuals have died alone in parking lots, city parks and around the downtown area. And in one case in 2009, a 38-year-old man died on a bench outside the State Capitol. 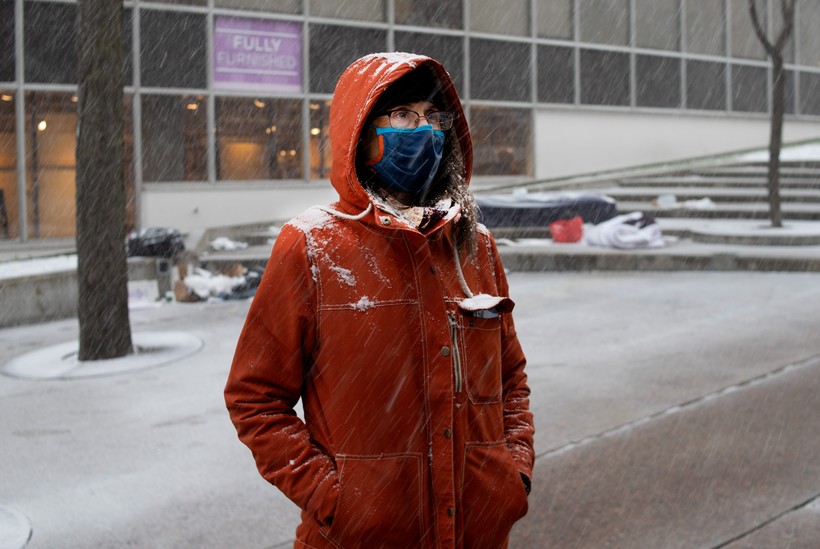 Standing on State Street in Downtown Madison, Dr. Ann Catlett, a palliative care doctor with UW Health, is one of the founders of Solace Friends, a new nonprofit that is creating a hospice house for the homeless. Steven Potter/WPR

Catlett says the Solace Friends hospice home could make a huge difference for those individuals.

"(It’s) a pretty small number, but it’s still 15-20 people a year who maybe won’t have a death that’s uncomfortable or on the street," she said.

Organization To Coordinate With Local Agencies For Hospice Placements

Logistically, the homeless hospice house would receive referrals from hospitals or social service agencies for patients who are in the last six months of their life. Then, the patient would choose a hospice agency for their medical care and the hospice operators would handle the rest.

"We would be for people what a family might do if they have a family member in hospice in their home. So, we will not be the hospice — hospice agencies will need to come in and support the residents in our home, but we’ll be like surrogate family in a way," she explained. "We’ll have paid caregivers there, but we’ll also have a cadre of volunteers who are providing social support, spiritual support, companionship and running errands."

To pay for the program, Solace Friends has begun an ambitious fundraising campaign and hopes to raise a quarter of a million dollars by the end of the year. So far, Catlett said they've received a significant donation from UW Health and also won a grant from a Madison church.

They may also charge residents rent on a minimal, sliding scale for patients who receive benefits like social security.

The group has also started to look for a location — a four- or five-bedroom house in the downtown area. Another nonprofit called Housing Initiatives Inc., which operates a permanent housing program for those dealing with mental health issues in the city, has offered to be a landlord for Solace Friends. They’ll buy a property, rent it to Solace Friends and help them remodel it for use as the hospice house.

"(This is) a population that tends to be disconnected from traditional support like family and friends," he said. "What better thing than to have a program that can accommodate them when they’ve been disconnected for so long."

Once it’s operating, the Solace Friends hospice house will join the Omega Home Network, a collective that promotes the development and expansion of community homes for dying people. Omega Network Board President Kelley Scott says Solace Friends will be one of only a handful in the United States created to exclusively serve the homeless population — and the only one in Wisconsin.

"It’s really a beautiful demonstration of kindness within a community to offer this kind of care to people in the most vulnerable time of their life," said Scott.

Another homeless man named Jay 'Monk' Erickson, 38, agrees and said Solace Friends is not only needed here but everywhere. "There’s a lot of people, too, that are drifting town to town to try to find things like that," he said.

Catlett says the motivation to create Solace Friends is a desire to treat everyone how we all want to be treated, especially at the end of life.

"I just see (those who are homeless) as someone very much like me, like my friends, like my family," she said. "They don’t deserve to struggle as much as they seem to and certainly don’t deserve to be vilified or stigmatized and treated poorly because of the situation they’re in."

If all goes well, Catlett hopes to open the doors of Solace Friends sometime in early 2022. 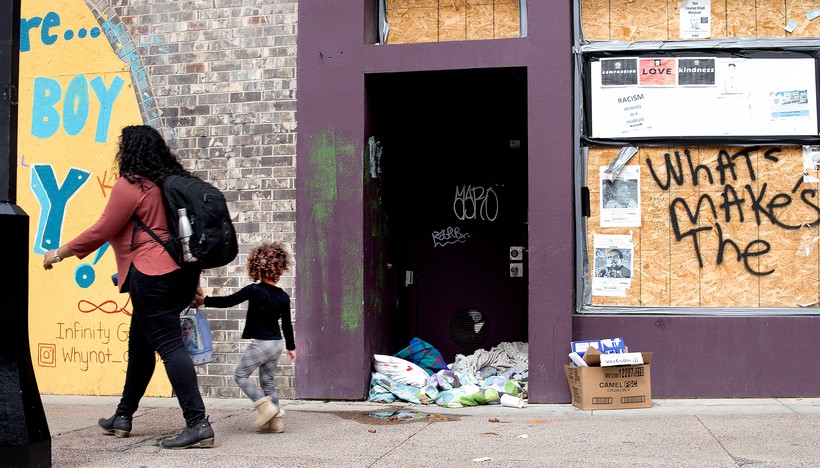 A woman and child pass by an abandoned storefront on State Street in Downtown Madison that's often used by homeless people as a place to sleep. Steven Potter/WPR