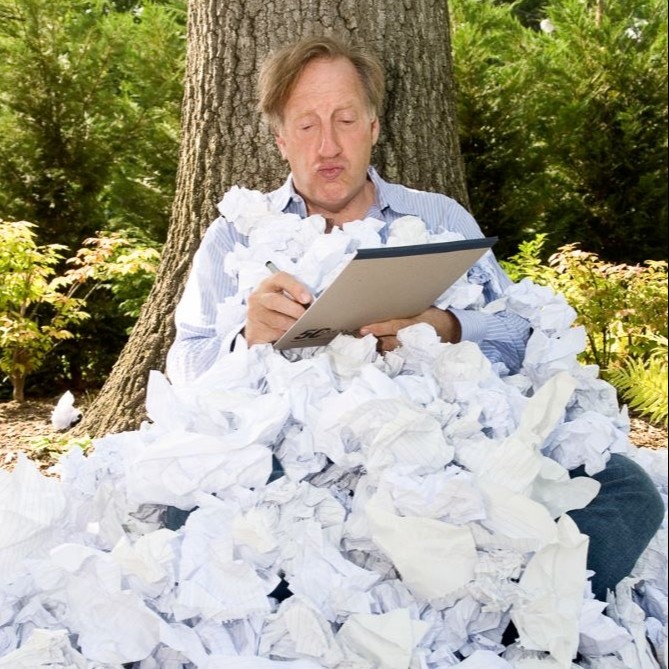 Zweibel Writes About Being One Of The Original Writers On 'Saturday Night Live' And Co-Creator of 'It's Garry Shandling's Show' In New Book
By Doug Gordon
Share:

In his new memoir, "Laugh Lines: My Life Helping Funny People Be Funnier," veteran comedy writer Alan Zweibel takes readers on a hilarious behind-the-scenes tour of what it was like to be one of the original writers on the comedy institution "Saturday Night Live" and to collaborate with the late comedian Garry Shandling on the groundbreaking deconstruction of the situation comedy, "It's Garry Shandling's Show."

After graduating from the University of Buffalo in 1972, Zweibel sold jokes for the Borscht Belt standup comedians in the Catskills. He charged seven dollars a joke, with one of his favorites being: “They have a new thing now called sperm banks, which is just like an ordinary bank. Except here, after you make a deposit, you lose interest.”

Zweibel started doing standup himself. One night in May 1975, he had a particularly rough set at a "Catch a Rising Star" club in New York City. A young man with long hair approached him in the bar afterward and told Zweibel that he was one of the worst comedians he'd ever seen, but his material wasn't bad. That young man was Lorne Michaels, who was scouting the clubs in search of new talent for the revolutionary new comedy television show he was creating for NBC.

"Lorne Michaels saw me, wanted to see a bunch of my jokes, and I typed up what I thought were my best jokes, eleven-hundred of them," Zweibel told WPR's "BETA." "I gave him this tome of eleven hundred jokes and he opened it. And he read the first joke and he just sort of nodded and went 'very good.' And then he closed it up."

And what was that first joke? "The joke was, and this is to show you how old it was from the reference points in it. I'd written a joke saying that the post office was about to issue a stamp commemorating prostitution in the United States. It's a 10-cent stamp. If you want to lick it, it's a quarter."

Just a few days after that meeting, Zweibel learned that he had got a job as a writer on the brand-new show.

One of his proudest "Saturday Night Live" accomplishments was writing the well-known samurai sketches for John Belushi.

"Buck Henry was to come in and host and Lorne said to me, 'You worked in a delicatessen before you got here, right?' I said, 'Yeah.' He said, 'Can you write 'Samurai Deli'?' And I went, 'Oh, yeah, you bet.'"

Zweibel is also very proud of the character Roseanne Roseannadanna that he created with Gilda Radner.

"A writer named Rosie Shuster had written a sketch called 'Hire The Incompetent.' It was a public service announcement where people who got fired from their jobs because of their incompetence. This was to say, 'Please hire these people even though they're incompetent,'" Zweibel said.

Radner put on a wig, used a dialect, and was scratching her arms and picking her nose for her appearance in the sketch. A few weeks later, Zweibel had dinner with Radner. Zweibel was running the "Weekend Update" segment of "Saturday Night Live."

Zweibel left "Saturday Night Live" after five seasons and did some freelance work. A few years into the transition, he met Shandling and did some work on a Showtime special for the comedian.

"It was like lightning struck a second time, as it had done with Gilda. He was somebody I could write with, where we got each other. We could make each other laugh. But our senses of humor were just a little different to make the alchemy something that neither of us could have done alone. After the special was over, he told me about an idea that he had for a show where he would play himself, Garry Shandling, the comedian who would talk to the camera," said Zweibel.

Zweibel told Shandling that he had a very similar idea. So they joined forces to create a meta take on sitcoms called "It's Garry Shandling's Show." The show seemed to take the Pablo Picasso quote, "Every act of creation begins with an act of destruction," as its guiding principle.

"Garry and I, when we would write this show, we would say, 'Okay, 'Three's Company' would do it this way. They would dissolve from this scene to that scene. Well, what I had Garry do was we went theatrical. I would have Garry look to camera and say, 'Okay, here's where we are in the story. It's now three hours later and I have to deal with this cop.' And we would have the cop standing there. And he (Garry) would turn back into the scene and continue the episode."

After all he's accomplished in his comedy career, is there anything that Zweibel's itching to do?

"A brochure," he quipped. "I've never written a pamphlet."

Besides the brochure, we can also look forward to a movie that Zweibel co-wrote with Billy Crystal. It's called "Here Today." Crystal directed the film and co-stars with Tiffany Haddish.

"I'm 70 now. Billy's a couple of years older than me and I would say to him more than once: 'Look how old we are. And we're still doing this,'" said Zweibel.