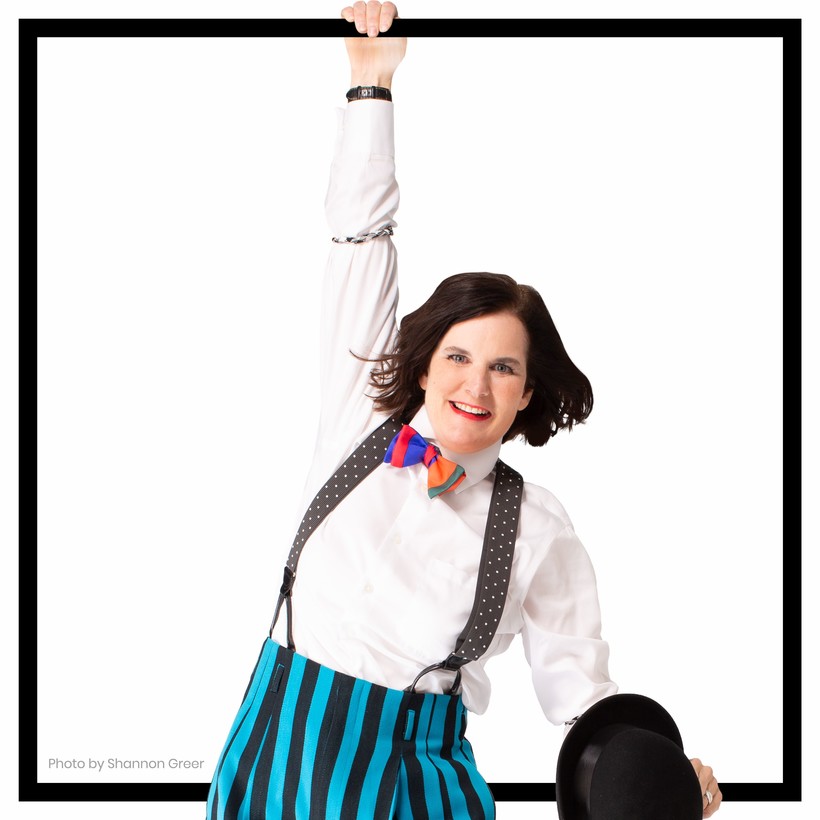 But she had to press pause on that.

Like the rest of us, Poundstone wasn't traveling because of the coronavirus pandemic. Despite being stuck at home, she used her vivid imagination and spontaneous sense of humor to entertain her fans virtually. Through her website and social media, Poundstone kept the laughs going with funny videos and fan contests.

Poundstone joined WPR's "BETA" from her home in Los Angeles to talk about her adventures in quarantine and getting back out on the road.

"In the beginning, I really thought it was going to be like a couple of weeks," Poundstone said of the start of the pandemic in 2020. "And then my next calculation was maybe a couple of months. And I remember that was in March."

When she realized nobody knew when this was going to be over, she started making comedy videos and putting them on her website to help people get through the pandemic.

"One of my favorites was a character named Miss Nancy who was doing distance learning," Poundstone said. "So Miss Nancy, she had a first grade class in Massachusetts, and now she's talking to them through Zoom."

In this sketch, Miss Nancy tells her students that maybe it's not so bad not having in-person learning. As she points out, not everything about being in person was all that great. For example, the bacteria on the water fountain and the anxiety that students felt standing in front of the bathroom stall because they weren't sure if someone was in there. Miss Nancy offers a message of hope to her students: "We will all get through this difficult time together. Apart."

This occupied Poundstone for bit, but then she came to an unwelcome conclusion.

"I was banging out those videos for a while, and it was a tremendous amount of work," Poundstone said. "And then I started to realized, I think it's going to be even longer than that."

Poundstone said she has not changed her approach to creating material for her live appearances. During the pandemic, she received several requests to do shows on Zoom or other online platforms.

She said the organizations did not know how to make shows on Zoom and other digital platforms work, and she didn't either.

Poundstone said that she would do characters, interviews and interstitial content in which she would comment on something.

"But I refuse to stand in my living room and pretend that people in their homes are the same kind of audience as in a theater because it isn't so," she said. "Even trying to find what did work in those settings was a battleground."

The remote performances were difficult, and like so many people during the coronavirus pandemic, she had to adapt. Again. Instead of standup, Poundstone began doing a game show called "Nobody Asked You" from her living room.

"I have no desire to learn any kind of technology. None. Zero," she said. "It doesn't fascinate me. Doesn't interest me. It generally doesn't make my life any easier. So yeah, I'll be happy for all sorts of reasons when all this is behind us."

I would like @cher to perform a song called "If I Ever Zoom Again," which I will write for her, if she agrees, right here on Twitter, to record it. @cher?

And now Poundstone is back on the move, traveling the country.

She performed at the Overture Center in Madison on October 8th, 2021.

"What's not to love about coming to Wisconsin?" she exclaimed when asked what her favorite thing is about visiting the Badger state.

"Is it just the cheese hats in the airport? Yeah, that's part of it, sure," Poundstone said. "It's very beautiful there. That's part of what I love about it. And I always love the audiences. I often confess to them too early in the show that I don't care about football. And so there's sometimes a temporary breach, a cold patch, if you will, in our relationship, but eventually they warm up to me again."