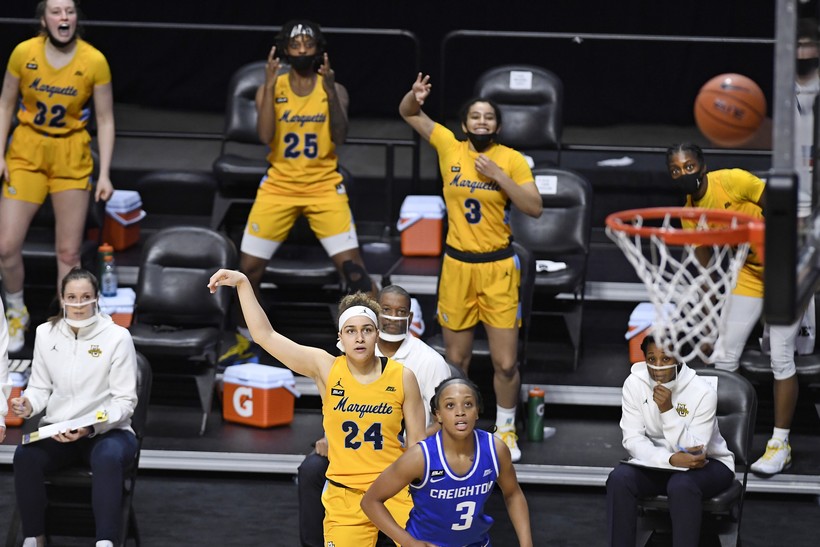 It's A Busy Season For College Sports After The Coronavirus Pandemic Interrupted Athletics Last Year
By Megan Hart
Share:

For the first time ever, the University of Wisconsin-Madison has 22 of 23 teams competing this semester.

The pandemic has posed added challenges — Wisconsin’s top-ranked women’s volleyball team is returning from a two-week hiatus related to the coronavirus. Meanwhile, other teams are getting ready for their postseason runs after missing out on opportunities last year.

Here’s a roundup of a busy week in college sports around Wisconsin.

On Monday night, Marquette will face the University of Connecticut in the finals of the Big East women’s basketball tournament. It’s a homecoming for powerhouse UConn, who returns to the Big East after a seven-year sojourn to the American Athletic Conference.

The No. 1 Huskies have dropped only one game this season, but they beat the Marquette Golden Eagles by just 10 points when the teams met earlier this month.

In Sunday’s semifinals, Marquette beat Creighton 64-59. Senior Selena Lott had 27 points. Since winning the Big East in 2017, the Golden Eagles have lost in the conference title game each of the last three years. It’s been heartbreaking, Lott said.

"We’ve got to go out and play with our hearts," she said.

UW-Madison’s women’s hockey team won a national title in 2019, but didn’t get the chance to defend it last year. Just before the NCAA tournament, the season ended early due to coronavirus. That makes the No. 2 Badgers reigning champions going into this year’s tournament.

Wisconsin is set to face Providence in the quarterfinals on March 16. The Badgers have won their last six meetings against the Friars. The winner of that game will face Boston College or Ohio State in the semifinals on March 18.

On Sunday, the Badgers beat the Buckeyes 3-2 in overtime to win the WCHA tournament for the ninth time.

"It's been an amazing experience so far, and I'm so excited for the future. Everything about it has been surreal," said freshman Lacey Eden, who scored the game-winning goal in overtime. "Everyone accepted me onto the team right away, and we've just gotten so close over the past couple of months."

Badgers Wrap Up Regular Season Atop Conference In Men’s Hockey

For the first time ever, Wisconsin has won a regular season Big Ten title in men’s hockey. The No. 5 Badgers clinched the crown Saturday with a win over Michigan State. Wisconsin’s freshman goalie Cameron Rowe had 40 saves. Meanwhile, sophomore Cole Caufield scored both Badgers goals in the team’s 2-1 victory over the Spartans.

Caufield is leading the NCAA in goals and points this season.

The Badgers will be the top seed in the Big Ten men’s hockey tournament. After a bye, they’ll face either Penn State or Notre Dame in the semifinals March 15.

Wisconsin was set to be the top seed in last year’s Big Ten men’s basketball tournament, but the event turned out to be one of the earliest coronavirus cancelations. On the court, this year hasn’t gone quite as well for the Badgers. Wisconsin will be the sixth seed when the tournament opens in Indianapolis.

The team will face either Penn State or Nebraska on Thursday. The Badgers are coming off three consecutive losses to tough Big Ten opponents. Despite their struggles with consistency this season, they’re sure to get a berth in the NCAA tournament.

Wisconsin and Illinois are the bottom seeds in the Big Ten women’s basketball tournament, which gets underway Tuesday. The winner of their first-round matchup will face Northwestern on Wednesday.