Before the snow gets too deep on Birch Lake in Oneida County, editor and publisher Ted Rulseh will walk its entire circumference — about three miles.

"There's just a certain magic to the ice and to being able to get out there and walk on the surface where before you obviously couldn't," he said.

An avid outdoorsman and author of the blog, "The Lake Where You Live," Rulseh said there's plenty to enjoy on top of the water and around it as winter settles in.

But the activities on Wisconsin's lakes don't start with the first freeze. Much like the tree leaves, changes start in the fall, Rulseh said.

Get To The Freezing Point

In warm weather, the lake is stratified with warmer water on top and colder water on the bottom. When fall brings its cooler weather, the water surface cools and the upper and lower layers mix. Wind and waves "infuse the lake with oxygen," Rulseh said.

That's necessary for the fish, frogs and turtles to survive under the ice for the winter. Oxygen is made even more accessible — actually more so than any other time in a year — because colder water holds more oxygen. When the water reaches freezing point, it's got almost twice as much oxygen as it would in 80 degree water temperature.

Without calm and cold weather, the lakes would have a hard time freezing because wave action causes tiny ice crystals to break up. Windy weather also makes things challenging because it stirs up warmer water from below.

"The water gets down to about the freezing temperature and then it takes a nice cold, still night for that sheet to form," he said.

Getting On The Ice

To find out whether the lake is safe enough to walk on, Rulseh performs a "rock test." He finds a rock about as large as his fist. Standing on shore, he'll throw it as high and far as he can.

If it crashes through the ice, it's clearly not safe to walk on. Sometimes it'll make a plopping sound, which means that while it's getting there, it's probably not safe yet. But, if it sounds like you threw the rock on sidewalk, you've got freedom to roam.

"I'll step out slowly and just a little bit at a time so if I break through, all I'll get is wet feet or wet up to the knee," he said. He then searches for a crack in the ice which he'll peer at to get a sense of how thick the ice actually is.

Rulseh uses the U.S. Army Corps of Engineers standards for ice thickness. Those standards say ice is safe at 1.75 inches for one person on skis, 2 inches for someone on foot or ice skates and 10 inches for a seven-ton truck.

"I don't know that I would ever drive my car out onto ice," Rulseh said, noting he tends to be conservative when spending time on ice. "It seems perfectly safe; people do it. But every year there are cars that break through. The bottom line is if in doubt, don't go out."

When you do eventually get out, keep your eyes peeled for signs of life, like paw and belly tracks from the otter — an animal who knows how to have fun in winter, Rulseh said.

"They'll take a few running steps, and then they'll slide on their belly," Rulseh said. You can track their movements by the imprints they leave in the snow.

There's plenty of action beneath the ice, too. Some of a lake's fish do become more lively in the winter, such as the northern pike, blue gills, perch and walleyes. More sluggish in the winter are the large and small mouth bass and muskies.

There are other phenomenons to pay attention to as the bitter cold reacts with the lake. For one, listen for the booms, which are caused by the ice expanding and contracting.

"Sometimes it's a loud boom, sometimes it almost sounds like a cross between a drum and a bell," Rulseh said.

Lake crystals are other interesting sights, although these are seen more in the springtime as the lake begins to thaw.

Rulseh said lake ice isn't a single slab but rather a set a hexagonal crystals that grow downward from the surface. When the ice starts to melt, these crystals come apart. That's called candled ice, or sometimes referred to as rotten ice. This ice isn't safe to walk on, because even if the ice is a foot thick, the crystal structure is weakened so much that you can break through it.

Home On The Lake

Plenty of reasons to enjoy living on a lake during a Wisconsin winter might incentivize people to build or move there. But Rulseh said if you're planning to build a home on a lake, the best thing to do is leave the shoreline natural.

While ordinances in Oneida County would have allowed Rulseh to cut a 35-foot "viewing corridor" to the lake, Rulseh said he and his wife chose not to do that, in part to obstruct the view of their home from the lake and allow lake-goers to enjoy the natural deciduous and conifer trees.

Rulseh also noted the importance of keeping the lake clean and free of blue-green algae — a toxin that can be dangerous to pets and humans. He recommended doing this by building a shoreline buffer, which can be as simple as letting the grass grow from about 30 feet out to the lake's edge. Otherwise, just plant native plants.

That will help by slowing water down enough so it will soak back into the soil and not run off into the water.

What Wisconsin's Lakes Are Up To In Winter 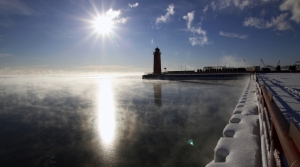 Wisconsin’s lakes may seem quieter places in winter, but there is a lot going on under the surface. A Wisconsin author and lake enthusiast joins us to discuss the science behind our seasonally changing waterways.