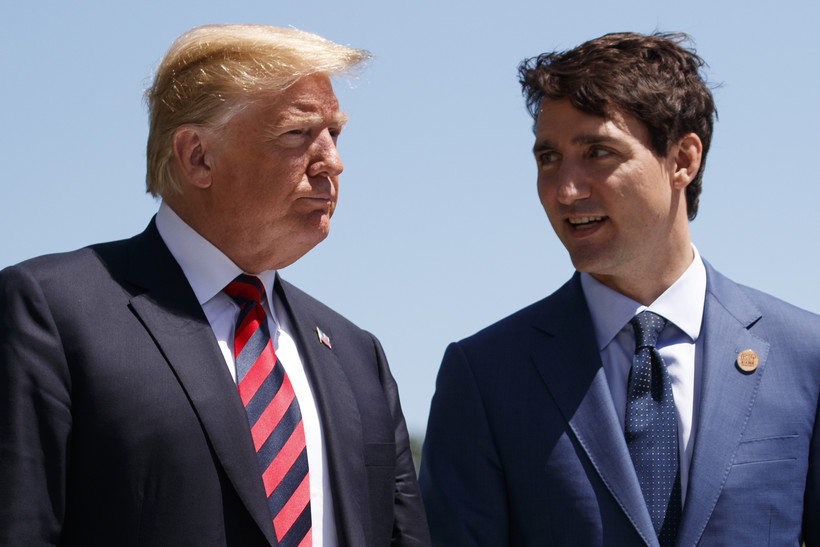 Great Lakes And St. Lawrence Leaders Vow To Work Together Despite Tension Over Tariffs
By Danielle Kaeding
Share:

A coalition of more than 130 United States and Canadian cities are rejecting rhetoric between the U.S. and Canada as tension mounts over tariffs on aluminum and steel imposed by the U.S. in recent weeks.

U.S. President Donald Trump called Canadian Prime Minister Justin Trudeau "dishonest and weak" after last weekend's G7 Summit. The remarks were in response to Trudeau’s statement that the nation would move ahead with retaliatory tariffs on July 1 and that Canadians "will not be pushed around."

The comments by top U.S. and Canadian officials over tariffs will have a negative impact on U.S. and Canadian cities, said John Dickert, president and chief executive officer of the Great Lakes and St. Lawrence Cities Initiative.

"When you look at the fact that our people and products are constantly crossing this soft border, we don’t find it being helpful to create conflict and division with our partners here in Canada," said Dickert.

The tariffs have the potential to impact the economies of cities along the U.S.-Canadian border and threaten relations with one another, said Paul Dyster, mayor of Niagara Falls, New York.

"We stand shoulder to shoulder with our Canadian friends in calling on our leaders to negotiate new trade rules in good faith and put the well-being of the people who live and work in the Great Lakes/St. Lawrence region first," said Dyster.

Speaking from the Twin Ports, Superior Mayor Jim Paine said relations with Canada is vital to protection of the Great Lakes and the port city’s economy.

Sandra Cooper, the initiative's incoming chair and mayor of Collingwood, Ontario, said it's important for officials to work together on both sides of the border.

"As mayors in the Great Lakes St. Lawrence region, we represent a community of common interest, dedicated to the protection of our shared waters and our integrated economic prosperity," Cooper said in a news release.

"Right now, what we’re doing as an organization is we’re collaborating between the United States and Canada on major issues like phosphorus, funding for the Great Lakes that’s designated funding," said Dickert. "We’re looking at invasive species efforts working together and to make sure that we don’t have people that are taking water out of the basin."

Dickert said growing challenges around the lakes, including algal blooms and plastics pollution, leave no place for distractions. U.S. and Canadian mayors made remarks on tariffs Thursday at the annual conference for the Great Lakes and St. Lawrence Cities Initiative in Ajax, Ontario.

Editor's note: This story was updated at 4:30 p.m. on Thursday, June 14, to include comments from Superior Mayor Jim Paine.