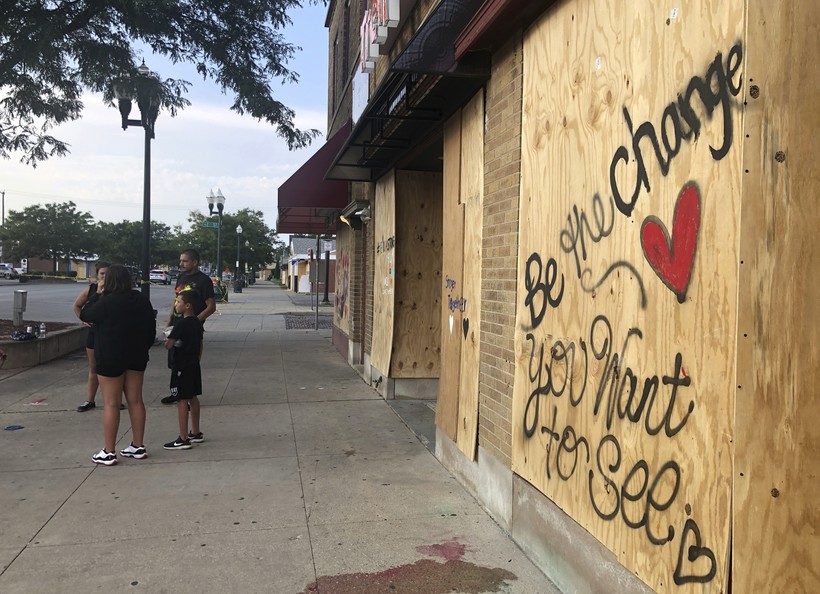 Residents stand in front of boarded-up businesses in Kenosha, Wis., Thursday, Aug. 27, 2020, days after protests of the police shooting of Jacob Blake turned violent and demonstrators set fire to a number of buildings. Russell Contreras/AP Photo

Antaramian released a letter he sent to the president on Sunday asking him to push back his trip. He said Kenosha is no stranger to hosting presidential and candidate events, but felt like the city should be focusing on internal healing, rather than gearing up for a presidential visit.

"The timing on this, we felt, was not good, so we made the request for him to do it at a different time," he said Monday during a press conference. "I think that you have a community that's in the process of trying to heal — there's so many things that have gone on in this community, it just seemed to me and to others that it would be better for us to pull together, let the community get together."

Kreuser also said it's "not the ideal time" for Trump to visit. He also called an earlier Trump tweet, which said, "there would be no Kenosha" if he hadn't sent in the National Guard, "a false statement."

"Kenosha is a strong community, and we were going to come back regardless," Kreuser said at the press conference. He cited Kenosha's endurance through the closure of a Chrysler assembly plant in 1988, and from the Great Recession in 2008.

"For someone to say that we wouldn't exist but for their action, when I believe it to be false, because I know things too, I just have to tell you what I believe the answer is, and that's false," he said.

At earlier press conferences, Gov. Tony Evers, Wisconsin National Guard Adjutant General Paul Knapp and a number of county officials have made it clear that the president does not make the call as to whether state National Guard troops are deployed. Instead, a county puts in a request, as was the case in Kenosha, and then the governor decides whether to authorize the National Guard's deployment, as Evers did.

Kenosha County Sheriff David Beth also spoke at the press conference Monday, and  addressed a video that's been circulating social media that shows him, on the scene of the police shooting of Jacob Blake on Aug. 23, watching the bystander video of the shooting on a phone. Beth had told reporters on Thursday that he still hadn't seen the bystander video of Blake's shooting. He said that was true — that while the video shows him holding a phone playing the video, too much was going on around him for him to see it.

"If you saw that video of me holding the phone, you didn't look at what was around me. You did not look at the rocks being thrown at me, the Molotov cocktail that was landing near my feet," he said. "I wasn't looking at my phone, I was looking at the people that were very animated around me."

A tale of two videos:

Here you will see Kenosha County Sheriff David Beth watching the cell phone video of Jacob Blake being shot 7 times in the back, AT THE SCENE OF THE SHOOTING. pic.twitter.com/GSnfLsNyTt

Beth said a city squad car was destroyed, and a captain struck in the head by a brick, while sheriff's deputies were processing and guarding the scene.

Kreuzer, the county executive, also announced that he will be putting funding for body cameras for sheriff's deputies in his proposed budget this October, with the intent that they'll be implemented in 2021. At the city level, Kenosha approved body cameras for police in 2017, but balked at the price tag. Current plans for the city's budget wouldn't fund the cameras until 2022.

More than 1,500 National Guard troops are on the ground in Kenosha as of Monday afternoon, according to Knapp, adjutant general of the Wisconsin National Guard. At least 1,000 are from Wisconsin, while an additional 500 came from Michigan, Alabama and Arizona. He said he expects that number to hold steady, for now.

"That number will remain constant until we have a conversation with the local authorities and all of the other law enforcement agencies that are participating here, and we decided that it's an appropriate time to start to scale back," he said.

The out-of-state forces are under Knapp's operational control and command for the duration of their deployment to Wisconsin, he said, but their home states retain control over administrative matters.

Knapp said the president's visit Tuesday won't affect their mission, as presidential protection is typically handled by the Secret Service in coordination with local law enforcement. He said the National Guard's priority is to protect people's right to peacefully protest under the First Amendment. The National Guard doesn't make arrests — those fall to local and federal officials.

Kenosha police released arrest numbers and other data related to the protests on Sunday. According to their records,175 people total have been arrested, with 69 people arrested for curfew violations and 34 for curfew in conjunction with other charges such as burglary and carrying concealed weapons. They said the arrests included people from 44 different cities, and 102 of those processed during the week had addresses from outside Kenosha. Police say they seized more than 20 firearms, and towed three vehicles related to active criminal investigations.

Antaramian, who has acknowledged that Kenosha has problems with systemic racism and has laid out a plan to start community conversations around race, was asked if that racism extended to the city's Police Department as well.

"I think law enforcement does a very good job in our community," he said. "Like every entity and every group out there, we have to deal with racism in general, and that is what we're planning on doing."

Kreuser, the county executive, was asked a similar question. The Kenosha county board declared racism a public health crisis on Aug. 4.

"We are working with the entire community to work on it," he said. "Every community has work to do, and we're going to be taking those steps, not in the short range, but also in the long range, while we do training and working with our people in our community."