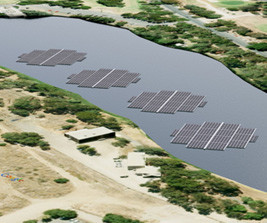 The Adams city council and the Adams-Friendship Area School Board voted to let an Australian company make Adams its American headquarters.

Global Environmental Infrastructure Technology Solutions (GEITS) first approached the Adams County board with a plan for a floating power plant to clean up pollution in Lake Petenwell. While the county has yet to move forward, the city of Adams is moving full speed ahead.

In a unanimous vote, the Adams council approved an agreement with GEITS that would lead to a new office headquarters, a $20 million-dollar factory for solar products, and an alternative energy power plant. Adams City Administrator Bob Ellisor compares this Australian technology invasion to the British music invasion of the 1960s.

"The city of Adams is going to be center stage to the Midwest if not the nation for this new innovative technology. This is their introduction into North America, and I've got to say, I think this Australian invasion into America I think is bigger than the Beatles."

Ellisor say Adams will use GEITS technology to clean up its waste water, and will convert its street lights for solar power. The Australian company has also approached the Adams-Friendship Area School District with a solar energy proposal, according to District Administrator Steve LaVallee.

"Put solar panels [on] all our buildings that are in town, which would include our high school, middle school, elementary school, the administration office as well as the bus garage. It's a decision the board is looking at very carefully. It's an exciting opportunity."

The Adams-Friendship Area School Board voted 9-0 to draft a possible legal agreement with GEITS for the solar panel technology.