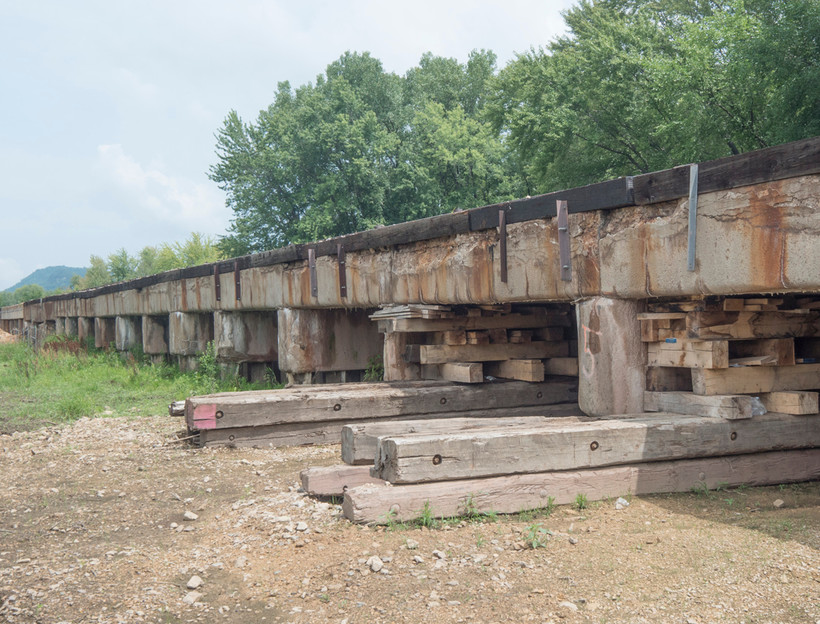 Photos obtained from Citizens Acting For Rail Safety show the Coon Creek Bridge south of Stoddard held up by wooden planks. BNSF conducted an emergency fix this summer and will replace the bridge early next year. The company says the bridge is safe and inspected more frequently.

Average Of 36 Trains Per Week Travel Through Area With Highly Volatile Oil
By Maureen McCollum
Share:

The safety of some rail bridges along the Mississippi River has some residents concerned and federal officials questioning the integrity of the structures.

The railroads follow the entire stretch of the Mississippi River along Wisconsin. Trains travel next to highways, pass through towns and cross the river on lines owned by BNSF Railway. An average of 36 trains carrying more than one million gallons of crude Bakken oil travel these rails weekly.

Recently, members of the group Citizens Acting for Rail Safety, or CARS, decided to check out some of the bridges south of La Crosse. What they saw concerned them. Guy Wolf found bridges with crumbling concrete and exposed rebar. One bridge was held up with stacked wooden beams.

“This should scare everybody, that we’re hauling this kind of fuel down these rail bridges,” he said.

Flipping through a pile of photos of the rail bridges, Wolf acknowledges that he’s not an engineer, but he still wants a more thorough investigation.

“We’re radically concerned that these bridges have not been inspected properly, that they pose a significant threat primarily because they are carrying high-level, flammable material — over 1 million gallons of oil every single day down the river,” said Wolf.

Railway companies must inspect the tracks they own. In this case, it’s BNSF.

BNSF denied several requests for an interview, but in an email, a spokeswoman said all bridges are inspected at least once annually. If an inspector and structural engineer identify a major deficiency, the company then decides whether to fix the bridge or replace it. Rail companies submit their inspection reports to the Federal Railroad Administration, which then evaluates them.

Multiple requests to speak with FRA officials on bridge safety and inspection protocols were denied. An FRA spokesman said in an email that the agency can perform safety inspections on bridges. It will issue emergency orders to remove or limit rail traffic if a bridge is found to be a serious hazard.

Meanwhile, CARS members have recently met with Sen. Tammy Baldwin, D-Wisc., in La Crosse to speak on the issue. She sent a letter to the FRA this week requesting inspection reports on the bridges near La Crosse.

“It’s hard to believe that they were adequately done when you see the images, but I want to hear from authorities about what guarantees they can give us that inspections are done on an annual basis, that they’re comprehensive, that there’s a plan in place for reconstruction of bridges that are showing signs of failing,” said Baldwin.

CARS members also brought the bridge photos to the attention of U.S. Secretary of Transportation Anthony Foxx when he was in La Crosse last week. Foxx said the bridges are part of the overall problem with infrastructure in the country.

“Regular people all around the country are going to have to start speaking up,” he said. “These bridges I saw, the pictures I saw of these bridges that have been held up by trestles — it’s just hard to believe it’s America. You can believe it’s a Third World country, but it’s the United States of America and we can do better than that.”

After viewing the photos, FRA officials who were also at the meeting, but could not be interviewed, said they would send an inspection team to Wisconsin this week to examine the bridges along the Mississippi River.