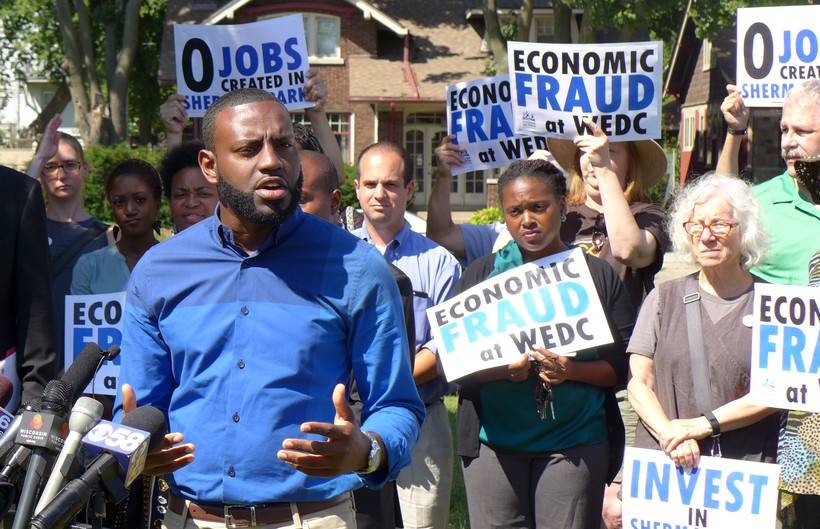 State Rep. David Bowen, D-Milwaukee, speaks to a crowd of community members, lawmakers and activists about job creation in Milwaukee.

Community activists and Milwaukee lawmakers are calling on the state's economic development agency to do more to create jobs on the city's north side, citing job loss as one cause of last week's civil unrest following the fatal police shooting in Milwaukee's Sherman Park neighborhood.

Citizen Action of Wisconsin reviewed a database on the Wisconsin Economic Development Corporation website and found the agency reported supporting and investing in the creation of 483 jobs in Sherman Park located on the city's north side. When the non-profit researched the companies adding those jobs, it found the companies to be located outside Milwaukee.

State Assemblywoman La Tonya Johnson represents Sherman Park and joined Citizen Action and other stakeholders at a gathering Tuesday in the neighborhood. Johnson said the agency has invested more in the smaller, more affluent Milwaukee suburbs.

"WEDC needs to provide support to companies and businesses centered in and around the inner city of Milwaukee," Johnson said. "The people who live in this community deserve good paying jobs, and they deserve the opportunity to have their workplace accessible within their community."

Those assembled said the lack of state investment in Milwaukee’s north side long pre-dates WEDC’s creation in 2011.

Sherman Park is more than what the world has seen in the news recently. It's a community with historic homes, a strong neighborhood association, residents who are professionals and large institutions such as a hospital, which give the area a solid foundation for genuine revitalization efforts, said Willie Brisco, co-president of WISDOM, an association made up of church congregations.

"So it would have been easy to start our improvement of the inner city here in Sherman Park, but that is not the case," Brisco said. "All of the sudden now there’s poverty in Milwaukee and everybody wants to stand up and do something about it or make believe they’re doing something about it."

In a written statement, WEDC claimed that jobs shown on its website as created in Sherman Park were a mapping error. The agency also said it has invested more than $4 million into Milwaukee's north side, other predominantly African-American and Latino neighborhoods in the city and efforts targeting minority-owned businesses in the city.