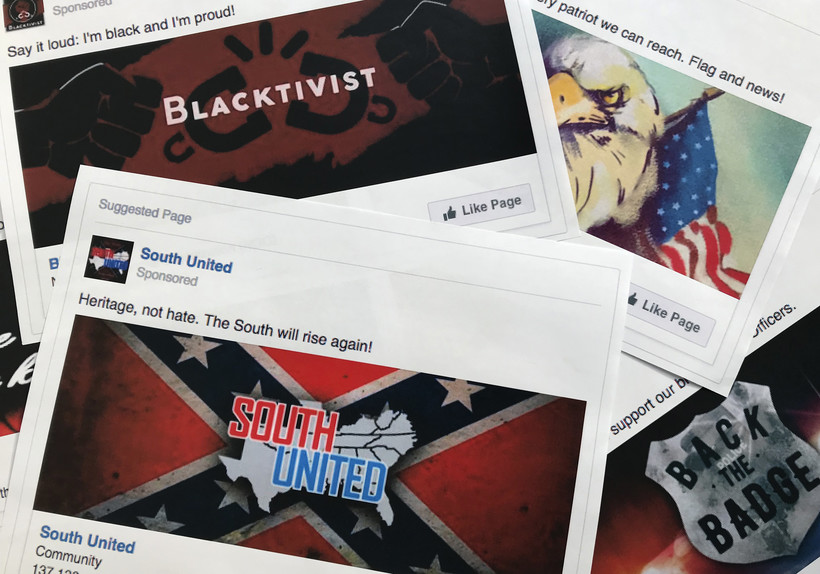 This Nov. 1, 2017 file photo shows prints of some of the Facebook ads linked to a Russian effort to disrupt the American political process and stir up tensions around divisive social issues, released by members of the U.S. House Intelligence committee, in Washington. Jon Elswick, AP File Photo

Fake News Has Ancient Roots. These Examples Provide Road Maps For How To Deal With Misinformation Now
By Elizabeth Dohms-Harter
Share:

For most of her career as an analyst for the Central Intelligence Agency, Cindy Otis spent her days wading through a fire hose of information, some of it fake, some of it true.

Her job was to pick out information that was helpful and useful, and identify misleading sources of information that served to confuse, manipulate or misinform the public. In a fast-paced environment, her goal was to make sure U.S. policymakers were informed on ever-changing world events.

Sharing tips she used in her career to spot misinformation, Otis' new book, "True or False? A CIA Analyst's Guide to Spotting Fake News," reveals different ways that misinformation can be noticed and looks at examples of fake news throughout history.

The term "fake news" has been twisted a bit in recent years to refer to content that doesn't match a person's worldview. But the term itself has been around for centuries, Otis said. It refers to any kind of false information that's intentionally spread to mislead consumers of that information.

In her book, Otis writes that fake news showed up in a poem commissioned by Ramses II, a pharaoh of Egypt, describing his god-infused conquering of the Hittite army. Masquerading a peace treaty spurred on by a battle with massive casualties of both the Hittite and Egyptian armies, this poem kept the masses ill-informed for centuries.

Fake news crusaders have been around all along -- during the French monarchy, in colonial America, through the American Revolution and the wars that followed. They obstructed truth in fields of science, journalism, health and many others.

"There is this tendency to think of this as a new problem," Otis said. "It increases the panic over the issue and the sense that there's nothing that we can do about it and it's all hopeless."

But fake news' ancient roots provide a sort of roadmap for how to deal with it now, during a time when platforms such as social media and blog sites can facilitate a never-ending stream of guesswork for its readers and viewers.

When you come across a story, Otis advised, first check it against your emotions. Otis said in this time, false information is likely to appeal to our emotions, especially when people are feeling stressed and angry over the pandemic, national protests, an upcoming presidential election and the challenges of daily life.

When we're driven by emotion, she said, we're less likely to tap into the critical thinking parts of our brains that ask, "Who's posting this? Do I know this account? Where is this website they're citing?"

"The first step is to take that breather, take that pause," she said. "Wait until you're clearheaded enough to investigate the information."

You can investigate by seeing if you can vet any of the sources that the post listed, click on links to other websites, check out the reporters who wrote the stories and verify that they're real, she said. Then, if you find the information isn't accurate, don't share it.

A fellow at the Atlantic Council's Digital Forensics Research Lab, Otis said she left the CIA in 2017, just as the world was beginning to learn more about Russia's influence on the 2016 presidential election. She began to write publicly about national security, and started getting questions from people asking for help in figuring out the truth.

"And I realized, there were some helpful tools and tactics that I employed as an analyst that could be used by the everyday average information consumer," she said.

Otis said she understands how easy it is to get overwhelmed by the influx of information. But labeling everything as "fake" instead of sorting through the mess isn't a good approach.

"By giving up, you're really not fixing the problem," she said. "In fact, you're making it worse. And on top of that, there are foreign governments out there that want you to give up."