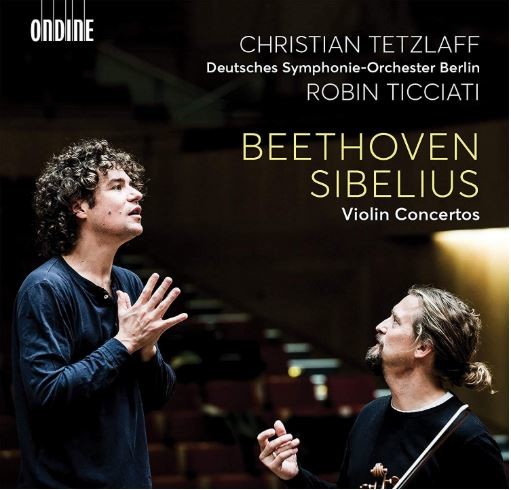 He's done them before — the Beethoven a dozen years ago and the Sibelius earlier than that.

German violinist Christian Tetzlaff's newest release includes two of the most popular violin concertos in the repertoire, Beethoven's Concerto in D major, Op. 61, and the Sibelius Concerto in D minor, Op. 47. He performs with the German Symphony Orchestra of Berlin (DSO Berlin), Robin Ticciati conducting. The release is on the Ondine label, which is based in Finland.

It was the sole violin concerto for both composers with just under a century separating them; audiences can't seem to get enough.

In the WPR music library, there are over 35 versions of each concerto, varying in length up to 10 minutes (over 13 in the case of the Beethoven.) So why record them again, adding to the surfeit of excellent and diverse interpretations already available?

"Both are milestones ... Our sound picture and our close emotional association with them are guided by the narrative dimensions of the work," said Tetzlaff in an interview transcribed and translated for the recording's liner notes. Herein lies the answer: The narrative dimensions of both works are enormous, allowing artists to bring their own storytelling and emotional depth to the pieces. And sense of humor.

Tetzlaff continues, "Why does somebody tell us about the profoundest things, while at the same time he wants to convince us that he can do everything that can be done on his violin? And connected with this, he radiates a certain mirth - even circus mirth."

He describes the joy he feels in the final movement of the Beethoven and in the first and third movements of the Sibelius, although the virtuosity in those last two "has its closeness to madness or excessiveness."

On the other end of the spectrum, Tetzlaff compares part of the Beethoven to a "losing-of-oneself" and "devotional holiness." He describes the Sibelius as "a wild soulscape" set in a Finland of "wildness and roughness that reflects the 20th century."

All this is to say that yes, there is ample justification for new recordings; especially by an artist whose emotional and spiritual maturity is on full display, coupled with mind-boggling technical virtuosity.

The orchestra shimmers with a lovely and very well-balanced sound under Ticciati's baton. There's a richness in the strings that complements the tone of Tetzlaff's violin, and terrific playing by the woodwinds and percussion. In particular, there was a beautiful lightness and subtlety in both concertos where it's needed, but especially in the Sibelius, evoking its northern soul with finesse.