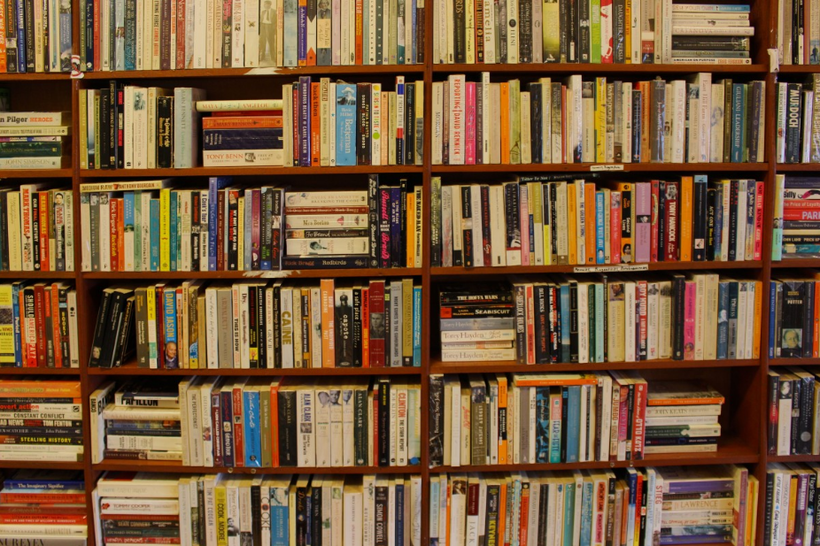 Our guests, Becky Wojahn and Caroline Akervik, both authors and librarians, offer book recommendations for all ages as well as advice to get kids excited about reading.

Picture Books (preschool - early elementary)
Don’t Blink by Amy Rosenthal, illustrated by David Roberts Interactive bedtime story.
*Readers are challenged not to blink - if they do, a page is turned and when they reach the end of the book, they have to go to bed.
The Wall in the Middle of the Book by Jon Agee
*The pictures tell a very different story than the words. Helps early readers learn to read through looking at the pictures and the words to decode the story.
Sparky! by Jenny Offill, illustrated by Chris Appelhans
*Sloths may make surprisingly satisfying if not super engaging pets. The illustrations add to the humor and charm of the story.
Alma and How She Got Her Name by Juana Martinez-Neal
*Main character thinks she has way too many names - six! As she asks people about her names, she learns about her family history. Great family conversation starter.
I Walk with Vanessa: a Story About a Simple Act of Kindness by Kerascoët
*A little girl helps a bullied classmate with an act of kindness and changes her whole community. Touching, not cloying.
Lovely Beasts: The Surprising Truth by Kate Gardner, illustrated by Heidi Smith
*Features “unlikeable” animals with their stereotypical word, then, after the page turn you learn the other side of that creature. Could be jumping off point for conversations on not judging animals/people on first impressions.

Picture Books for Slightly Older Readers (7-11 year olds)
Whoosh! Lonnie Johnson’s Super-Soaking Stream of Inventions by Chris Barton
*(nonfiction)True story of inventor of Super Soaker water gun. Most kids are familiar with the water gun. Gets them fired up about STEM and their own capabilities.
Curiosity: The Story of a Mars Rover (nonfiction) by Markus Motum (author/illustrator)
*Reads like science fiction but TRUE! Awesome illustrations.
I’m Just No Good at Rhyming by Chris Harris, illustrated by Lane Smith (poetry)
*Hilarious poetry, in the vein of Shel Silverstein. Great for reading snippets out in short
segments.
Cute as an Axolotl (nonfiction) by Jess Keating
*Great read aloud. Pictures hook the readers. Witty science writing about “cute” animals.
What's the Difference?: 40+ Pairs of the Seemingly Similar by Emma Strack, illustrated by Guillaume Plantevin
*If you’ve ever wondered what the difference is between noodles and pasta or rabbits and hares or other similar things, this book has you covered. Very browseable.

Easy Readers (new readers, ages 4-7)
*Mo Jackson series by Sam Ricks
Little boy who is passionate about sports but not the most gifted athlete.
*I Am (Not) Scared by Anna King, illustrated by Christopher Weyant
Characters from I Am (Not) Small deal with fears while contemplating riding a roller
coaster.
Ballet Cat series by Bob Shea
Easy words and humorous illustrations on theme of friendship. Fun and not preachy.
*King and Kayla series by Dori Hillestad Butler, illustrated by Nancy Meyers
Brief mysteries for early chapter book readers. King is a dog who helps his owner, Kayla,
solve mysteries.
Early Chapters Books (for independent readers ready for something a little longer, ages 6-10)
The Infamous Ratsos series by Kara LaReau
Newish chapter book series of brothers who want to be “tough” like their dad, but
somehow, everything they do ends up helping people. (Dad doesn’t mind.) Great for new
chapter book readers. 3 books so far?
*The Unicorn Rescue Society series by Adam Gidwitz + others, illustrated by Hatem Aly
Main characters help mythical creatures around the world. Mythology and folklore are
always big sellers with kids. Motivates them to research the creatures.
*Narwhal and Jelly series by Ben Clanton (graphic novels)
Super cute series of two best friends - a narwhal and a jellyfish - and their adventures
undersea. Graphic novels reminiscent of Frog and Toad.
Dory Fantasmagory series by Abby Hanlon
*Dory is a bit of a wild hair with many imaginary friends. Laugh out loud funny. 2nd graders love it as a read aloud.

Middle Grade (upper elementary through middle school)
The Parker Inheritance by Varian Johnson
*Fantastic puzzle mystery set in modern day but with historical roots in civil rights era. Lots to talk and learn about, plus a darn good mystery to solve.
City of Ghosts by Victoria Schwab
*For kids who love scary. About a girl who, ever since she almost drowned, can see ghosts. Ironically, her parents (who can’t see ghosts) are ghost chasers, filming a TV series. The first in a series, this one is set in Edinburgh, Scotland.
Miscalculations of Lightning Girl by Stacy McAnulty
Sweet and funny fish-out-of-water story of a math genius girl with obsessive-compulsive tendencies having to survive a year in middle school.
The Atlas Obscura Explorer’s Guide for the World’s Most Adventurous Kid by Dylan Thuras and Rosemary Mosco, illustrated by Joy Ang (nonfiction)
*From the creators of the adult book and website, Atlas Obscura , this features little known places around the world. Fun to read together, one segment at a time, then go investigate.
Hello Universe by Erin Entrada Kelly
Misfit cast of characters save boy who is trapped in well. Deals with important issue of bullying.
Amal Unbound by Aisha Saeed
*Pakistani girl dreams of education but is forced into indentured servitude. Culturally relevant story.
Sanity and Tallulah (graphic novel)
Two girls, living on a space station, have to track down their unauthorized three-headed kitten who has escaped - and discover other things afoot. Lots of STEM, quick read, relatable characters and friendship.
2 Truths and a Lie (nonfiction) by Amie-Joan Paquette and Laurie Thompson
*Fun nonfiction book to read together - readers are presented with 3 outrageous stories, two are true, one is a lie. Could be launchpad for “fake news” discussions.
Science Comics series, assorted authors/illustrators (nonfiction, graphic)
*Informational comics about all sorts of science topics, from dinosaurs to dust.

Young Adult (middle school - high school)
Boots on the Ground: America’s War in Vietnam by Elizabeth Partridge (nonfiction)
*True account of Vietnam War history, but told in alternating chapters - one chapter will discuss the history, the next will be a first-person account of a person living through the historic events. Brings history alive.
Dread Nation by Justina Ireland
*Blends zombies, fantasy, history, and horror. Will rock your world.
You Bring the Distant Near by Mitali Perkins
*Three generations of Bengali women learn to live between cultures.
Trail of Lightning by Rebecca Roanhorse
* In a post-apocalyptic world, the Dinétah (Navajo nation) has been reborn but the legends now roam the earth. Maggie, a Dinétah monster hunter, battles tricksters and gods and monsters. As you might expect, it’s dark, with much violence. For upper YA.
The Prince and the Dressmaker by Jen Wang (graphic novel)
*A poor seamstress is hired to make clothes for the prince, only he also secretly wants dresses, too. A beautiful friendship (and possible romance) develops.
Hey Kiddo by Jarrett Krosoczka (graphic novel)
*Memoir of favorite children’s author/illustrator’s difficult childhood dealing with an addicted mother, absent father, and how art and an extended family saved him.
Turtles All the Way Down by John Green
*Aza, who is struggling with anxiety, and Davis team up to solve a mystery.
Anger is a Gift by Mark Oshiro
*Bleak look at world of systematic racism from viewpoint of gay teenager whose father was killed by police.