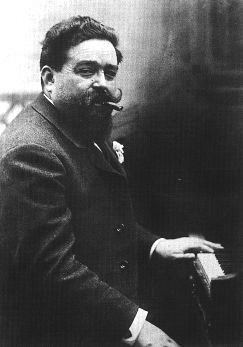 He was playing the piano at age one.  At four, he improvised at public concerts.  At six, he auditioned for admission to the Paris Conservatory and would have been admitted if it hadn’t been for one impulsive mistake.

Young Isaac Albeniz was a parent’s dream and a nightmare rolled into one.  He was born in Comprodón, Spain, in 1860.  His father was an administrator in the province of Gerona.  After the failure at the Conservatory, the elder Albeniz launched his six-year-old son on a three-year tour of intensive concertizing—with a heavy emphasis on showmanship.  The boy made a specialty of playing with the keyboard covered, with his back to the piano.  And to attract even more attention, young Albeniz performed dressed as a musketeer, with a sword at his side.

When he was eight, his father’s strictness and Jules Verne’s adventure novels prompted Albeniz to run away from home—still dressed as a musketeer.  He sneaked aboard a train where he chanced to meet the mayor of Escorial, a kindly man who arranged for him to perform at the local casino then put him and his earnings on the return train to Madrid.  But Albeniz sneaked onto a train going in the opposite direction. Bandits attacked that train. Albeniz didn’t want to go home penniless, so he went concertizing throughout Spain and Portugal.  He was twelve when the mayor of Cadiz had him arrested in order to return him to his parents at last.  But Albeniz stowed away on a ship bound for Buenos Aires.  A year later, when he was playing a concert in Satniago, Cuba, he was arrested again and taken to Havana.  Small world—his father had just become the comptroller of taxes there.

The elder Albeniz allowed the boy to continue his world travels.  Eventually returning to Paris, Albeniz applied again to the Conservatory and this time was accepted, in part because he avoided his previous mistake of pitching a ball through a window pane.