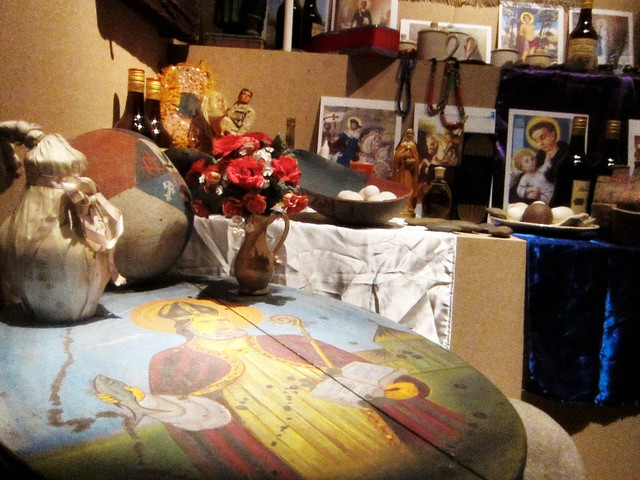 Hollywood’s depictions of “voodoo” conjures up images that fit right in with the Halloween season: black magic, push-pin dolls, ancient spells, sour-smelling elixirs and even cannibalism.

That imagery, however, doesn't give an accurate representation of the religion called vodou.

“Hollywood has been riffing misconceptions of voodoo since the Silent Era,” said Janet Hong, the project manager for exhibitions at Chicago's Field Museum of Natural History.

While the silver screen continues to perpetuate stereotypes, the real-life version of the Haitian religion is on full display at the museum's new exhibit, “Vodou: Sacred Powers of Haiti.”

“Vodou in Haiti is a complete religion. It's got its own theology and clergy and holidays and pilgrimages,” said Hong.

One of the first lessons the exhibit has to offer is a correction of spelling and pronunciation: Haitians call it Vodou, pronounced “vo-DOO.”

But more broadly, the exhibit also explores the history and culture of vodou. The religion — which centers on prayer to multiple gods and spirits, with ancestral spirits given especially high importance — grew out of a creative amalgamation of traditions of West African and natives of the Caribbean. It also contains elements of Roman Catholicism.

Vodou came to bear much cultural power among slaves in Haiti, and helped inspire a revolt against French colonists in 1791.

“Vodou was something that enabled a slave revolution in Haiti,” said Hong. “That’s why Haiti became the first country in the Western hemisphere to abolish slavery. That was in 1804, many decades before that happened in our country.”

After the revolution, vodou became considered dangerous and its practice slid underground. However, it remained an important element of life for many Haitians. That's something that still holds true today: While most people in Haiti say they’re Christian, Hong said virtually all Haitians claim to be Vodou because it’s so integrated into everyday life, whether that be through ritual drumming or honoring ancestors and spirits.

The museum exhibit itself consists of more than 300 items, including figurines, flags, urns, altar jars and dolls. Many of the pieces are bursting with color and sequins.

The donors of the artifacts ceremonously laid to rest the spirtuality of the objects before handing them over, but they warned curators of residual spirits and insisted that none of the items stay trapped beneath display glass — the spirits, they warned, would shatter the cases. The open-air display helps bring a visceral connection to the objects, said Hong.

Many of the ritual objects are paired with videos from Haitian Vodou practitioners explaining the cultural significance of the items and how they’re used, providing viewers a firsthand account of the religion.